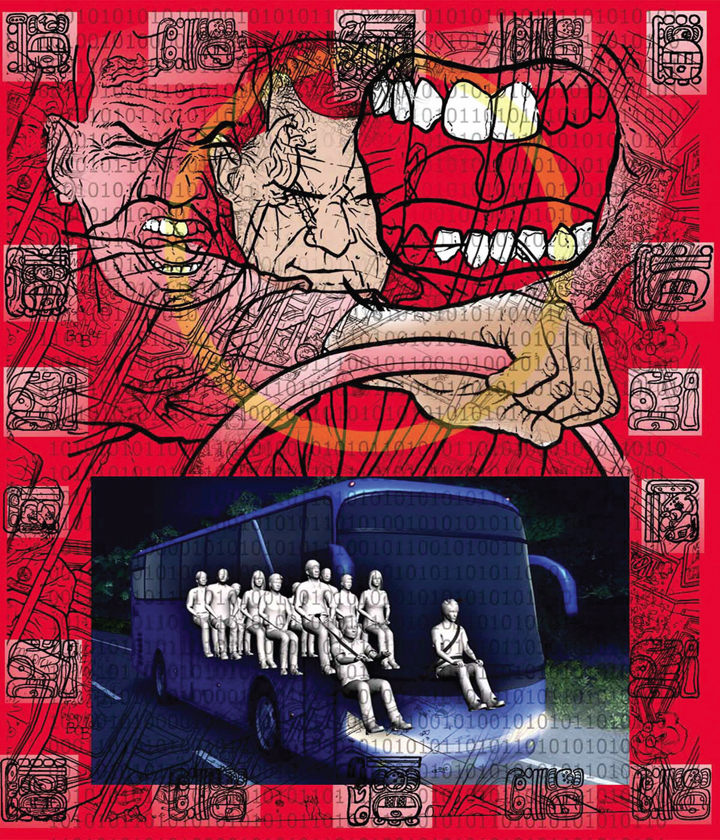 Red eyes blink at you from across the blacktop of the highway.  The tail lights sit still for the most part.  Each pair claims a piece of the night sky, twinkling in place.  Stare long enough, and constellations start to appear.  Here, a couple of lanes away, a snake curled up ready to strike made up of three taxi cabs and an askew Mazda.  There under the train station, a cocked gun made up of three black cars in a row and one taxi.

Stare even longer and soon, all you can see is red.  Every other color gets washed away, leaving the world just a filthy, fuzzy scarlet.

You must get a lot of staring done on this stretch. It’s all there is to do.  Everything else remains unmoving, unyielding.  Sitting inside the bus, legs cramping up even as they twitch against the clutch and brake, you’ve learned to know this road in ways you’ve never known your wife or the children at home you never see.  From here, you might even fool yourself into thinking you’re above what’s happening.

Kawawa, you think, shaking your head.  Grabe talaga ‘to.

But that’s just part of the illusion.  You’re as much a part of it as anyone else.

I know you’re trying not to think of that.

You focus on how everything stretches out before you towards the distant horizon of high rises.  No straight lines can be seen anywhere.  The vehicles twist and weave and turn in and out of each other like arteries tangled in veins and knotted in tiny capillaries.

You think of the children at home, the boy and the girl, the third on the way.  They’ll be missing their father again, always working the long hours.  You’re that man–the one who works too hard and has no energy left at the end of the day.  Try hard enough, you’ll see their faces in the tail lights.

See?  There they are.

Then the horns start blaring, the sound piercing through the windshield.  Once one goes off, others scream out to respond.  Feel the cacophony beats its way into your ears, pressing against your skull.  The blood pounds in your head, and you feel it clog against every bit of fat you’ve ever eaten in your life.

Your head feels cramped like a thousand cars fighting for space in a lane they don’t belong in.

Behind you, the tired sighs and gentle snoring of passengers.  The incessant tap, tap, tap of fingers against glass screens.  Muffled words and music pushing out against headphones.  Whispered gossip overheard at lunch from the sister of a friend whose tita knows someone in the government.  They don’t know you, won’t remember your face, but without you they’re nowhere.

Traffic moves an inch, maybe less.  A little pressure on the gas, lift the clutch a bit.  The timing is impeccable–pressure and release exactly when needed.  The bus lurches forward and jerks when you hit the brakes.  Everything comes to a standstill and the horns come again.  They drown out your thoughts, until your consciousness is only one long honk.

Above you, a pirated film chatters away on a broken television screen.  The hottest new starlet opens her mouth to profess her love but all that comes out is a blaring horn, screaming at the cars ahead to just move putang ina just move already.

The horns keep shouting at each other.  If sound had a color, you know that this would be red.  A dirty, dingy red smeared against a rusted wall.

Under the howling, sirens wail.  A police car, coming out of the gate of the police camp to your right, sits blockaded by a wall of metal and glass.  You convince yourself that you’re concerned.  Someone could be being robbed or murdered and this traffic damn traffic because of this damn government who just never get anything right and will this honking ever stop goddamn it just move already!

You’re screaming in your mind, I can hear it.  Teeth grind against each other to bar your frustration.  Soon, your rage dissolves into the horns.

The constellations blaze away and all that’s left is red lights.

The sea of red stars blinks and you blink back.

You slam your foot on the gas.

The engine roars as the bus crashes into the cars in front of you.  Two, three hunks of metal smash together.  The glorious sound of glass breaking and steel crunching.  The impact shakes the whole bus, people thrown to the ground fill the air with screams.  Your whole body shudders, racked by the jolt like electricity rushing through your bones.  A warmth on your head.  Blood, spilling down your face, free at last.

The horns again.  Or is that the screaming?

Laugh.  Now you’re that guy–the one they’ll talk about on the news.  See your family tearfully discussing you.  He would never do this.  This isn’t what he’s like.  They’ll open their mouth for more excuses but it’s all just honking.

Your body feels numb.  You’re panting, lungs seeking air and finding only smoke and blood in the air.  Everything is hot.  Your legs call out to you, and your foot finds the gas.  You press down again.

The bus obeys.  It shoves against the two cars that have melded to the front and smashes into the mess of traffic.  More glass shattering.  The safety glass behind you perhaps.  Metal screeches and bends and breaks and oh my god, the music of it.  Smashing against that blaring monotony–screaming and twisting and churning.  You don’t know if your foot’s on the gas but the bus keeps moving.

Down the slope of the overpass, the tangled beast of metal plows its way through taxi drivers and mothers and children and adulterers and priests and all that flesh gives way to the weight and the impact.  All the red in the world set against a deep black now, and the blood is pouring down your face.

With each collision, that rapturous jolt.  It rattles you down to the deepest parts of your body.  Fight off the tempting unconsciousness.  Remain in the moment.  This, you must feel this, for this is all there is.

The rattling and gnashing of teeth sets a joyous percussive beat to the fracturing of your bones in your legs.  When the steering wheel meets your chest, the air leaves your body.  Your ribs crumble and your lungs struggle, with no structure to hold.

The crash continues.  Through your bruised and swollen eye, you look out onto the road.  The veins have burst and the cars have relinquished all hope of civility.  You can’t tell where one starts and another begins.  It’s all just metal, crashing against blinking red lights.

That’s what’s happened.  It isn’t the domino effect of a devastating collision.  Physics has no role in your victory.  Rather, the world has finally come to its senses.  Let go of the breaks and step on the gas–pressure and release at just the right moment.

The earth shakes and a rain of glass falls against your skin.  Something has struck the bus from behind.  Again, that lightning rushing through your veins.  This one sends you forward.  The seatbelts snap, and you fall forward.  Your head is the first to break through the windshield– thick shards slicing at your face as you soar through a mist of broken glass.

You land with a thud into a cradle of hot metal.  The wreckage grabs you in its maw, limbs twisted to meet and join the carnage.

Barely breathing, you can taste the burning metal in the air.  A fire crackles a few feet from your head, livening the color of blood in your eyes.  Eye.  One of them is shut closed, you can’t tell if you’ll ever get it back.

You yell into the night.  No words from your mouth, just sound.

You test your limbs one at a time.  Your right arm still moves but each twitch sends stabs of pain through you.  Your left is just gone.  There’s nothing there but a dull throb.  Your left leg is moving but you can tell that the bone has been smashed to dust.  Your right leg only feels hot.

You hazard a peek.  A thin shaft of metal pokes straight through your ankle.

You bite down on your lips with the teeth you have left and move your leg.  The scream tears your mouth apart.  Your scream becomes an ocean, flooding the sky and filling your ears.  Deep in those dark comforting waters, you find the strength from pure stubbornness and a rush of what must be adrenaline.

The leg comes free from the metal.

Putang ina, sit up, you tell yourself.  I tell it to you too.  Together, we will your body to obey.  The thrill surges through you as you shove against the pain and force your body to sit up.

For the briefest second, you find yourself sitting up to see the red all around you.

You take a deep breath, your last, and look up to the sky.  It’s all black.

There are no stars out tonight.

The Fay of Glowing Lights