Marawi and Mindanao in the eyes of a prince 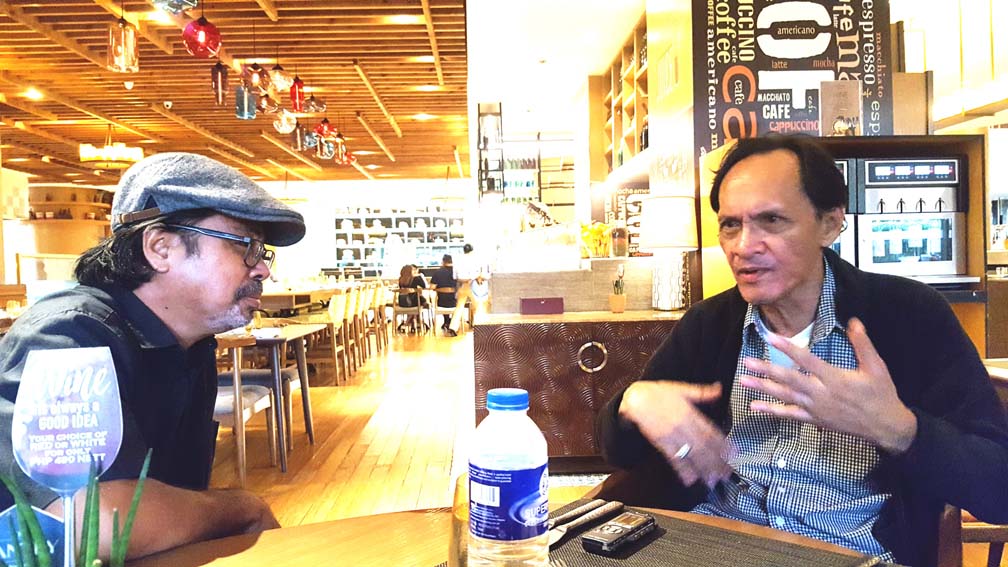 In the weeks following the end of the battle for Marawi City against Maute and ISIS terror cells, I met Aminullah Alonto Lucman (or Koko to his friends), son of former lawmaker Rashid Lucman and Princess Tarhata Alonto, at the Hotel Dusit.

I have met in the past several personalities who had claimed lineage to Mindanao royalty, but never one as down-to-earth and sensible as Koko. At the Dusit, I was met by my good friend, Belle Tiongco, who introduced me to Koko and there we conducted the interview.

Koko belongs to a long line of public servants beginning with his grandfather, Sultan sa Ramain Alauya Adiong Alonto, who once served as Commonwealth senator; then came his father, former congressman Al-Rashid Lucman.

Koko’s mother Princess Tarhata Alonto-Lucman was anything but your traditional Muslim wife. She was said to be the first Muslim lady governor of Lanao del Sur, breaking Muslim tradition by tying the knot with the man of her choice—Sultan Al-Rashid Lucman.

She had translated into English her father’s writings who served as religious leader and political leader. Princess Tarhata was also a staunch critic of dictator Ferdinand Marcos, a beacon of light especially for Muslim women in Lanao del Sur.

Koko was in Manila the past several weeks to attend the confirmation of his cousin as Philippine envoy to the Kingdom of Saudi Arabia—Ambassador Adnan V. Alonto.

After the brief curtsies, our conversation immediately turned to Marawi City. It was spontaneous on the part of Koko to speak on behalf of the city he has loved most of his life. To this once curious boy with princely bloodline, the city was his patch of paradise. Poor, yes, but never too steeped in poverty as to disregard Nature’s riches, which sprung all around him.

MARAWI BEFORE THE SIEGE

Koko said: “Marawi before the siege was the home we’ve always consciously felt to have been the place where our remains shall rest; that shall our existence take us forth to places strange and far, when we die, we return to Marawi to be buried there. But for those really serene and retired, Marawi is the best place to be. The weather, the air so fresh; the sun less harsh though most times can be pretty wet; it’s a good place nonetheless and it’s home—‘a place to die for’.

“Marawi is the city surrounded by mostly woods and pastures, and an ocean-like fresh water lake, in fact, the second largest lake in the country. And much of her riches is not really easily seen or felt. The lake houses six hydro plants generating electricity for most of Mindanao. It is said, if Saudi Arabia boasts of ‘black gold’ because of their oil, ours is ‘white gold’ because of our water resources.”

While Koko admits to differences in both thought and lifestyle between ordinary Filipinos and the people of Marawi, he said they’re not too far removed from what every child wants growing up in the big city.

“For kids like me, growing up in Marawi is accepting whatever ‘crumbs’ should come around. There is broad feeling of acceptance that we’re different people, and that the way forward is ‘good education’ no matter the odds. It instinctively was a survival mode, like accepting a three-hour/day water ration despite the fact that our city is surrounded by an ocean-like lake. Annoying brownouts despite our hosting six hydroelectric grids. We’ve always been so accepting of shortcomings, it’s been like this since.”

Koko recalled that life in Marawi was leisurely-paced, a tad too slow when measured up to larger cities like Metro Manila, Cebu or Davao. “There’s not much to do actually in the city,” he remembered with a smile.“Most times we are either in Iligan City or Cagayan de Oro, where a bit of life meant to be good, exists: good places to dine and malls to shop in, amenities available to residents in these cities are never enjoyed in Marawi. It is also the reason why most Maranaws chose to take up residence in these places.”

But the Marawi of current-day headlines was different from the Marawi of Muslim history. Koko’s own recollection of his city’s past can itself stand as a tribute to the courage on which each stone and memory was built.

“I have ‘never experienced seeing angry combatants vividly lost of senses and engaging violently as if in a foreign land, no regard for the place or people, all acting like ‘unthinking’ aliens born to kill or be killed, like souls possessed of demons.’

“Marawi is a place not really to be discovered. It is a place that resisted aliens for several centuries. Lanao hosting the lake was the epicenter of resistance during battles against foreigners. This was the place where the famous warriors reigned, ruled and fought wars of self-preservation like Sultan Kudarat who gave chase to Spanish conquests in Mindanao and defeated them in violent engagements. And the resistance against Spain from what I can gather lasted more than 300 years, a feat yet unmatched.

“The Americans have had their taste of war with the Iranun people of Lanao as well, in the Moro-American War from 1902 to 1915 that ended in a truce; allowing for the era we fondly called ‘The Peace Time’, among ‘truce’ conditions agreed was unfettered access by American educators to all Moro territories to be able to introduce American education, thus all American military personnel will be withdrawn as the truce letter entailed.

“In the armistice, the Moro people will be citizens of a democratic institution and that in return, their rights as people will remain; importantly their religion Islam will be preserved accordingly by guarantees and by virtue thereof, and under protection of the laws of the United States. (Circa 1899-1946 ‘1899 Bates Agreement’)

“Marawi in fact was a creation of American draftsmen, same Architects that did the US Military Academy, West Point. In the 1920s, Moro territories transformed as a democracy virtually every able man and woman, children undergoing education under American tertiary and a lot more of the men joining the US military, in fact serving the US military during World War ll.”

Koko was never able to return to Marawi. On the morning of May 23, 2017, members of the ISIS-inspired group, the Maute, took Marawi City by force of arms and hoisted the black Islamic State flag at the Amai Pakpak Hospital.

On May 27, the day of the Ramadan, Marawi City residents were forced to flee due to armed engagements between the Maute Group and government forces. On May 31, air strikes had begun.

“The place is ruined,” Koko said with a hint of sadness. “There’s nothing there to see. It’s sad, but we’re now getting the attention of the international community and the Filipino people.”

Koko is disappointed because apparently the Philippine government is not addressing the real issues surrounding the insurgency in Mindanao. To him, it all began during the Jabidah massacre where several Muslim army recruits were murdered.

“The problem I have with the whole hullaballoo is that we’re not addressing the real issues. The Muslims of Mindanao never really had anything to do with rebellion. Whatever you’re seeing now was triggered by the Jabiddah massacre. This is a very complex issue. The problem is about territory from the start, specifically the territorial dispute between Malaysia and the Philippines over Sabah. In that dispute over territory, the government killed army recruits, ordinary Muslim Army trainees who want to be part of the Philippine military.

“Before all this, in 1968, you hardly heard of any killing or engagements between the military and Muslims. I recall, the only bloody confrontations we heard about in the news were between the OXO and Sige-Sige gangs. In fact, the word ‘massacre’ was anything but familiar to the Muslim people. We even had to consult the dictionary for it.

“I was in second year high school, around 15 years old, when I first heard of the word. Everybody knew about the investigation, but they whitewashed it. We were already preparing for it. My uncles, mostly Muslim leaders, were already gearing to talk to Malaysia. Malaysia was already preparing to go to war with the Philippines, but us Muslims, we try to persuade against war. On the part of the Philippines, the Blue Diamond was already planning on attacking. Tunku Abdul Rahman, Chief Minister of the Federation of Malaysia, was hell bent on imposing his will on the Philippines. But my uncles were able to pacify the two.

“What we have to understand about the war in Mindanao is that it’s a proxy war. Malaysia is trying to insulate itself from international scrutiny. They (Malaysian leaders) let others fight their war against the Philippine government. Malaysia doesn’t want to fight for fear of breaking international laws.”

Muslims, according to Koko, are not a violent people. The Muslim people’s aim was and still is education, not to fight government. His own grandfather had forbidden every member of the family to own firearms. The story behind that family edict goes like this: After the Second World War, the Americans gifted Koko’s grandfather a U.S. Army-issue magnum sniper rifle.

Marcos and my uncle were fraternity brothers. His grandfather said they had no need for the gun and instructed Koko’s uncle to donate it to the ROTC. Marcos invited Koko’s uncle for a hunting trip to Ilocos using the said rifle. Three days after they arrived, Nalundasan was killed. Marcos was said to have used to same gun on Nalundasan, thus the banning of firearms in the Alonto household.

Koko’s call to government is clear: Know the real issues and address the problem from that perspective. According to him, Muslim rebel groups have hijacked the real issues by raising other issues that best served their causes for rebellion. To Koko, returning to the root cause of the problem is key to unlocking the solutions.

Asking Koko what he has in mind as a solution, based on the complex history of Mindanao, this was what he said: Government should convene a group of Muslim leaders, leaders in both government and the community, to declare a fatwa against these Islamic terrorist groups.

“The Jabidah massacre served as a trigger,” Koko said. “We should now refocus on the current problems like terrorism. Declaring a fatwa would help galvanize the Muslim people against those who are hijacking the Muslim faith and our traditions and using these for their own ends. We are at war with very sophisticated groups. We need a declaration of fatwa against these groups in order to bring together the Muslims of Mindanao. Only the Muslims can solve the problems of Mindanao.” G