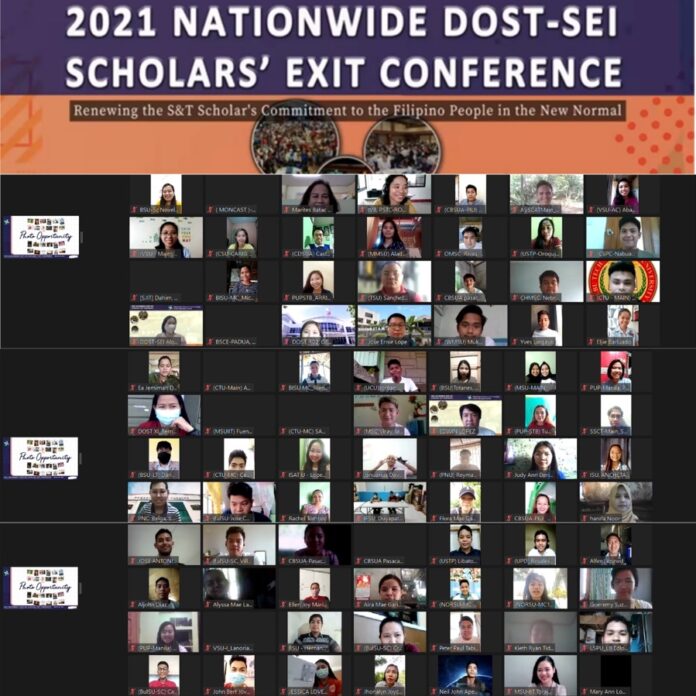 The Department of Science and Technology-Science Education Institute (DOST-SEI) hosted its graduating scholars in a half-day online exit conference last Mar. 26 to remind them of the true essence of being national science scholars.

The event was done online for the first time, and was attended by scholars from all over the country. A total of 703 participants composed of graduating undergraduate scholars; guest speakers; university representatives; and DOST officials convened for the activity.

The conference, headlined by the theme “Renewing S&T Scholars Commitment to the Filipino People in the New Normal,” featured talks from government agencies and notable scholar-graduates to prepare attendees on life after graduation.

In her Welcome Remarks, SEI Director Josette T. Biyo expressed hope that the talks will ignite among scholars the desire to serve the country and that the service obligation turn to something they are “willing to do rather than supposed to do.”

She likewise congratulated them for their perseverance, consistency and dedication to reach the milestone and gave assurance that SEI shall continue to root for them.

DOST Secretary Fortunato T. de la Peña, meanwhile, spoke proudly of producing not only experts but also patriotic scholars, noting those who started volunteer initiatives in the COVID-19 relief in their respective regions.

“We’re confident that as DOST Scholars, you are sure to leave imprints in your work wherever you may go,” said the DOST chief.

Succeeding talks from DOST-SEI reminded the scholars of their scholarship obligations as well as introduced local and international Graduate Scholarship opportunities available for those wanting advanced degrees.

Concluding the conference was Dr. Jose Ernie Lope, Batch 1991 DOST-SEI Merit scholar and now Professor at the Institute of Mathematics of the University of the Philippines–Diliman, who shared his inspiring journey from being a DOST scholar to now being one of the country’s pillars in mathematics education.