#STOP Online sexual abuse and exploitation of children through football 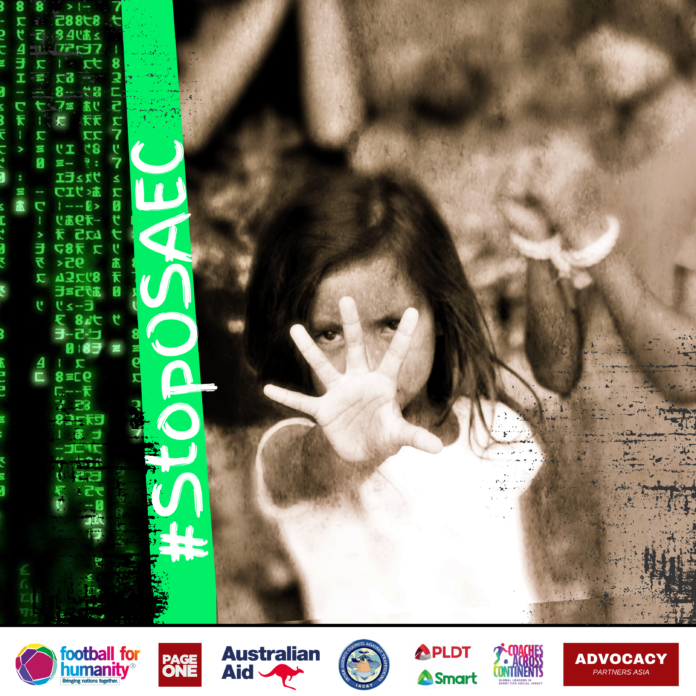 Football for Humanity and sports education partner Coaches Across Continents (CAC) kicked-off a series of online training sessions as part of its campaign to stop online sexual abuse and exploitation of children.

Some 30 coaches participated in the community football mobilization program under the #StopOSAEC (Online Sexual Abuse and Exploitation of Children) advocacy headed by Football for Humanity (FFH) and Advocacy Partners Asia Inc (APAI).

CAC is an international NGO and the global leader in using purposeful play and education outside the classroom to address the United Nation’s Sustainable Development Goals (SDGs) and the UN Convention on the Rights of the Child.

CAC Founder Nick Gates said, “I am delighted to share my support of the fantastic group of leaders from the Philippines, coming together with CAC and Football for Humanity to challenge Online Sexual Abuse and Exploitation of Children (OSAEC) in their communities and around the world. I believe if we can bring fun back to play and sport, then we can heal from our traumas and rebuild communities, families, teams and cultures with children’s imagination at the center.”

Free, fun, football sessions were offered to communities where children are at risk of online sexual abuse and exploitation.

The trainings are consistent with Article 5 of Republic Act No. 7610—An Act providing for stronger deterrence and special protection against child abuse, exploitation and discrimination, and for other purposes.

Sport and play have been endorsed by UNICEF in its Sport for Development Programs (S4D) as a proven platform for children’s “empowerment, leadership and self-esteem, and which contributes to overall well-being and future prospects.”

In addition, FFH and its partners recognize children’s right to leisure, play, and participation in cultural and artistic activities as enacted in the 1989 UN Convention on the Rights of the Child.

As of May 2020, the Department of Justice (DOJ) had reported an annual increase in OSAEC cases of 264%.

“OSAEC has created hundreds of thousands of traumatized children who suffer in silence. If we educate and empower children through play, we will help prevent, heal and reverse the crippling effects of this monstrous crime,” said FFH founder and president Chris Thomas.

Increasing awareness of the ills and dangers of OSAEC is crucial. Hence, Advocacy Partners Asia, Inc. and PGEONE, as leading organizations in development communication and social mobilization, are one with FFH in creating “a strong movement against OSAEC.”

It is supported by the Department of Justice Inter-Agency Council Against Trafficking (DOJ/IACAT), PLDT/Smart, and other partners and sponsors affiliated under FFH, which runs on a strong child protection platform in all of its initiatives.

Thanh Le, Development Counsellor at the Australian Embassy said, “The FFH project presents a valuable strategy to raise awareness on and counter OSAEC in communities through purposive play. It has a strong potential to empower vulnerable children and their families against OSAEC. This initiative complements Australia’s SaferKidsPH program, which aims to strengthen the child protection system in the Philippines with a particular focus on OSAEC.”

Social media platforms and online technology are at the center of the OSAEC problem, and constitute the “bridge” where alleged perpetrators and potential victims converge.

FFH and APA reached out to PLDT and Smart, the Philippines’ leading tele-communications and digital services providers, as they had already launched an aggressive campaign April this year to stamp out OSAEC through its technology solutions and support of organizations dedicated to fighting OSAEC.

Yang added: “We’re also pursuing shared value partnerships with like-minded organizations such as the FFH to strengthen our commitment to champion children’s rights and create safer spaces for them, both online and offline.

With technology and sports as our shared anchors, we aim to bring opportunities for vulnerable children to find hope, safety and support to continue moving forward.”

Law enforcement efforts regarding this online crime are led by the Department of Justice (DOJ) of the Philippines, which also created the Inter-Agency Council Against Trafficking (IACAT) in charge of coordinating and monitoring the implementation of Republic Act No. 9208, or the Anti-Trafficking in Persons Act of 2003.

The IACAT is multi-agency, composed of government agencies and non-government sectoral representatives who employ various approaches to combatting OSAEC.

Football for Humanity is a charity registered in the Philippines and the UK. The charity uses the power of play to educate, empower and protect children facing the threat of violence, exploitation and extreme poverty.