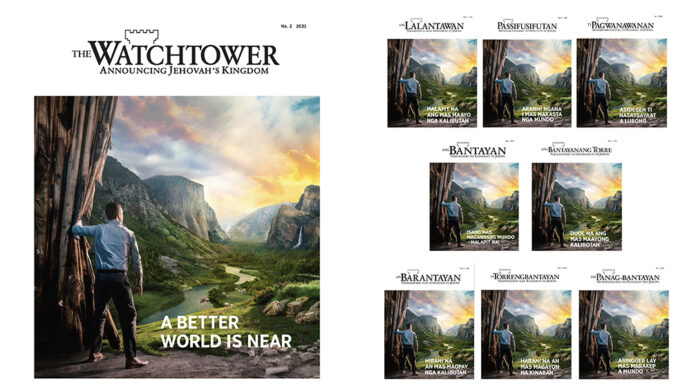 Metro Manila, Philippines, will be one of the thousands of communities around the globe that will receive a powerful message of hope as Jehovah’s Witnesses embark on a special campaign focusing attention on the Bible’s hope for a better world. The campaign will feature the distribution of a special edition of The Watchtower magazine containing the cover series “A Better World is Near.”

The Watchtower remains the most widely translated and circulated magazine in the world.  More than 36 million printed copies of the magazine will be distributed in some 230 languages to communities in 240 lands around the globe. In addition, the digital publication is available on various platforms in nearly 400 languages. In the Philippines, the magazine will include languages such as Tagalog, Bicol, Cebuano, Hiligaynon, Ibanag, Ilocano, Pangasinan, and Waray Waray among others.

“People are longing to hear a positive message and this is the best news possible,” said Leynard Rodulfa, Philippines Spokesman for Jehovah’s Witnesses. “A better world is not just a dream, it’s inevitable. In fact, it is a central part of Jesus’ gospel.”

The magazine addresses the question, “Is this world going to end?” The Bible’s comforting answer may surprise many readers. The magazine reveals the Bible’s clear message: The earth is here forever and will never end. The magazine, meanwhile,  explains that the Bible promises an end to injustice by quoting from the book of Psalms. —Psalm 37:10.
The Watchtower is available for download free of charge at jw.org. Request a free printed copy from one of Jehovah’s Witnesses by visiting jw.org and navigating to “Request a Visit.”

Facebook
Twitter
Pinterest
WhatsApp
Previous articleMembers save record-high P52.5 B in Pag-IBIG Fund in Jan-Oct, up 35%; MP2 Savings breach P21 B, up 110%
Next articleMedia Advisory: Cleanfuel will implement price adjustment, effective Tuesday, December 7, 2021 at 8:01am