The Unbearable Lightness of European History: Czech-French Writer Milan Kundera on the Trauma of Foreign Invasion 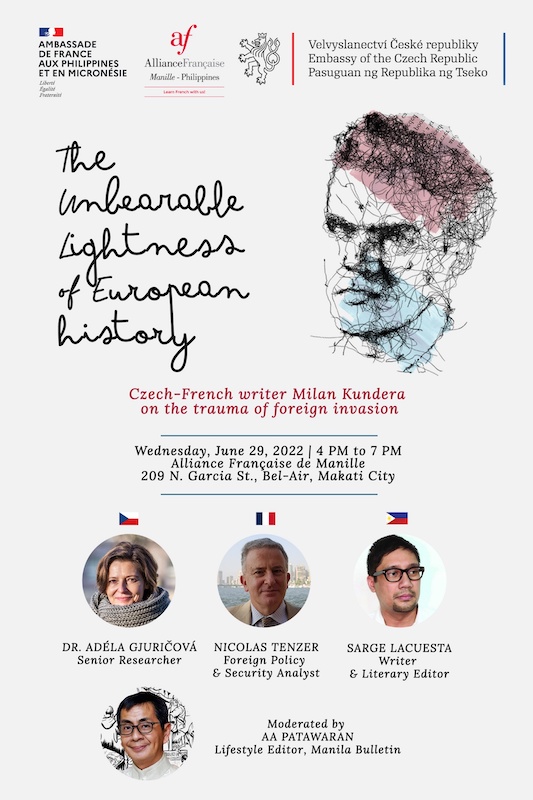 The Embassy of the Czech Republic and the Embassy of France in the Philippines, together with the Alliance française de Manille, have the pleasure to invite you to “The Unbearable Lightness of European History: Czech-French Writer Milan Kundera on the Trauma of Foreign Invasion” on Wednesday, June 29 from 4 p.m. to 7 p.m. at the Alliance française de Manille.

Milan Kundera’s early works bear the stigma of the events in Czechoslovakia in 1986. In August of that year, Soviet tanks rolled into the country to repress the Prague Spring, a brief period of greater political and cultural freedom that challenged the leaders of the USSR in the middle of the Cold War.

Discussing Kundera’s work, Adéla Gjuričová (Czechia), Nicolas Tenzer (France), and Sarge Lacuesta (Philippines) will address the question of individual experience in the face of tragedy, patterns in European history, and the “struggle of man against power, which is the struggle of memory against forgetting.” This discussion will also serve as an occasion to put in perspective the ongoing Russian invasion of Ukraine.

Slots are limited. To register: https://bit.ly/MilanKunderaFRCZ

Adéla Gjuričová is a senior researcher at the Institute of Contemporary History at the Czech Academy of Sciences in Prague. She focuses on politics and society during the late socialist era, the 1989 revolutions and post-communist transformations in Central Europe. She is the head of the Institute’s Political History Department and of the Working Group on Parliaments in Transition. Currently she leads the “City as a Laboratory of Change”, a large interdisciplinary project within the Strategy AV21 scheme of the Czech Academy of Sciences.

She is co-author of Rozděleni minulostí: Vytváření politických identit v České republice po roce 1989 [Divided by the Past: Political Identities in the Czech Republic after 1989] (Prague, Václav Havel Library 2011), Lebenswelten von Abgeordneten in Europa 1860-1990 [The Life-Worlds of Members of Parliament, 1860-1990] (Düsseldorf, KGParl – Droste 2014) and Návrat parlamentu: Češi a Slováci ve Federálním shromáždění 1989-1992 [The Return of Parliament: The Czechs and Slovaks in the Federal Assembly 1989-1992] (Prague, Argo – ÚSD AV ČR 2018).

Nicolas Tenzer has a twofold career: the first one as a senior civil servant, the second one as an academic and public intellectual. His current interests and writings are heavily focused on political risk analysis, European issues, Russia and Ukraine, disinformation warfare, the Middle East, US foreign policy, human rights, and corruption. He is a graduate of the École normale supérieure, Sciences-Po Paris and the École Nationale d’Administration (ENA) and has a Master’s degree in history. Since May 2021, Nicolas has been the editor of Desk Russie, a newsletter on Russia and the countries of the post-Soviet space and the chair of the connected NGO A l’Est de Brest-Litovsk.

A senior civil servant, Tenzer is a former adviser to the French Minister of Economy and Finance. He was an investigator at the Court of Auditors and Head of Department in Strategic Planning Commissariat (Prime Minister’s Office). He served as head of a special mission on international issues for the French government. He has led several missions for international organizations in Bosnia-Herzegovina, Bulgaria, Algeria, Ukraine, Montenegro, Egypt, Serbia, Haiti, Morocco, and Jordan.

Angelo R. Lacuesta has written several books, including five short story collections, two non-fiction books, and a collection of graphic stories. He has participated in many writing residencies, fellowships, festivals and conferences in the Philippines and abroad, and is a board member of the Philippine Centre of PEN International. He has won many awards for his writing, among them three National Book Awards, the NVM Gonzalez Award, numerous Palanca and Philippines Graphic Awards, and the inaugural Madrigal Gonzalez Best First Book Award. His most recent book is the novel JOY, published by Penguin Random House SEA in 2022.