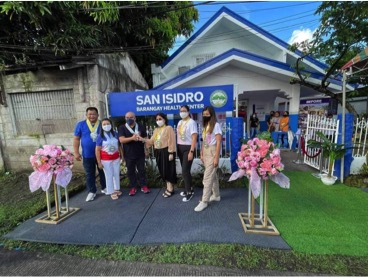 The partnership between SM Foundation (SMFI) and UNIQLO with its parent company Fast Retailing Co., in the promotion of health and wellness was strengthened as three more community health centers were inaugurated and turned over recently in the Bicol region.

These Centers were likewise equipped with the necessary health apparatus, furniture, appliances, and vitamins and medicines.

The region’s geographical location makes its prone to natural calamities.

To ensure the barangay health centers are ready for disasters and emergency, SMFI and Uniqlo provided the centers with Emergency Go Kit+.

SMFI executive director for medical programs Connie Angeles said, “Health facilities play a very significant role in the mitigation of disasters because of their function in treating the injured and handling outbreaks of disease. These trying times, we believe that health centers are vital for community surveillance and response.”

“We need health centers in the countryside that are equipped to treat people with minor injuries, which is extremely useful to reduce congestion and referral to hospitals or other more sophisticated medical facilities,” she added.

The health centers will also be venues for the COVID-19 vaccination program.

The Angas Barangay Health Center is a 100 sq. meter one-storey health facility constructed through the efforts of the Basud local government unit.

Despite being an unfinished building because of limited budget, it was still utilized as a health center.

Its roof was damaged by strong typhoons.

With the renovation done by SM Foundation and Uniqlo, it is now a modern health center.

It is the 8th Uniqlo – SM Foundation renovated health facility.

The Center was blessed by Fr. Noel Domingo of the Parish of Our Mother Perpetual Help.

Also a one-storey building, it has a floor area of 95 sq. meters.

It was constructed on December 19, 1990 through the efforts of the late city mayor Jessie Robredo.

Meanwhile, in Baao, Camarines Sur, the San Isidro Barangay Health Center was vacated for almost three years because it was totally devastated by Typhoon Ulysses in November 2020.

The two-storey, 110 sq. meter health facility is now fully operational after its renovation by SM Foundation and Uniqlo.

It is the 10th Uniqlo – SM Foundation renovated health facility to date.

SMFI and UNIQLO are set to turnover other upgraded health centers across the country in the coming months under this collaboration.

It can be recalled that last year, SMFI and UNIQLO also partnered to renovate seven community health centers (Rodriguez, Rizal, Marikina City, Cauayan Isabela, 2 in Tuguegarao, Bula, Camarines Sur and Tiwi, Albay) which are all now being utilized for basic medical needs and emergency responses.

According to Angeles, SMFI believes that working alone as a single entity yields lesser benefits than when working together as a team.

“There is much more that needs to be done, but with partners like UNIQLO, we at SM Foundation are confident that we will be able to attain our social good goals sooner rather than later. Thank you, UNIQLO, for spreading social good with us!”

SMFI, through its Health and Medical Programs, upgrades public health centers in its host communities, complemented by its medical caravans across the country.

To date, it has renovated more than 170 health and wellness centers and served almost 1.2 million patients during its medical missions.