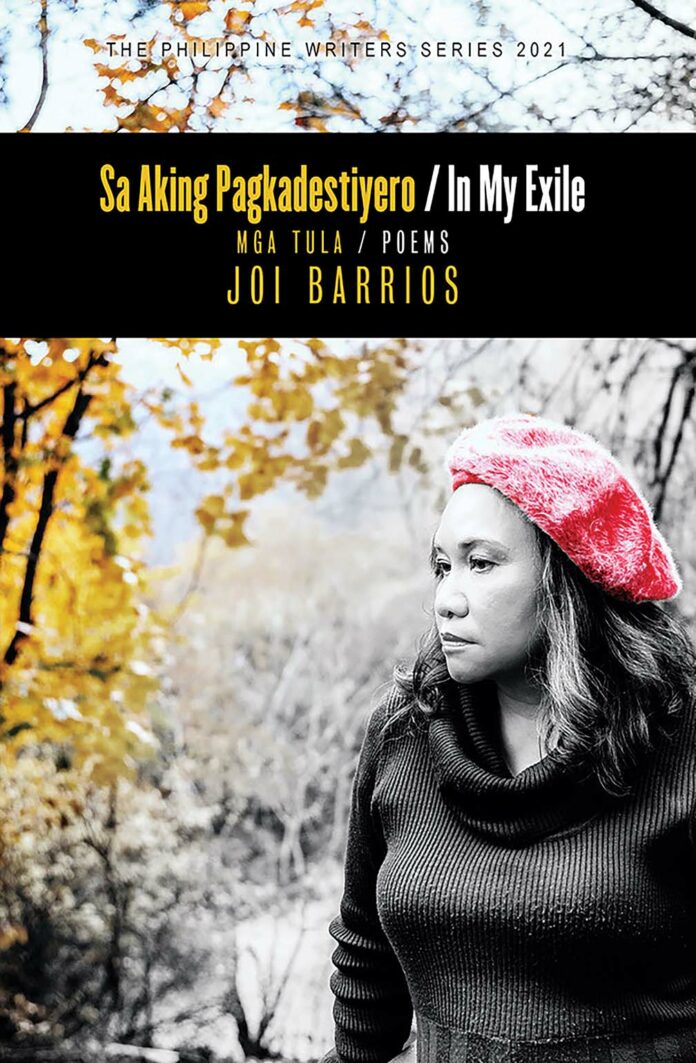 Quezon City: University of the Philippines Press, 2021
(with translations in English by various writers)

Sa Aking Pagkadestiyero/In My Exile by Joi Barrios rings a bell to the reader who is familiar with the daily news, the injustices, the struggle for freedom and equality. The angst of the author, who has been in exile in the United States for years, surfaces whenever she remembers the distance between her motherland and the fact that exile is also her choice because she finds personal happiness in her American husband Pierre, a professor and a psychiatrist who is supportive of Joi.

Whatever the situation the poet is in, the poems are clear testaments of her stand in life. In her introduction, she unapologetically shoots a powerful poem.

I grieve the moment of my decision
of leaving.
But find no graveyards for weeping
No candles to light.
Nothing.
……….
The revolution goes on
within me,
and with them in my country
in the east.

In the darkest of days,
I remember this,
and I am whole,
and battle-armed.
Ready for home.
Always. Always.

And so, the poet goes out on a limb, criticizing some policies of the Philippine government; former President Rodrigo Duterte’s sexist and misogynist remarks; the murder of a Filipino gay by an American enlisted man, who was allowed to leave the country with impunity; etc.

“Sagot ng Puke/ The Cunt Strikes Back” alludes to Duterte’s order to the soldiers to shoot the women of the New People’s Army (NPA) in the vagina. “Ang Kuwento ng Inidoro/The Toilet Story” depicts how a dirty toilet bowl witnesses the gruesome moment an American soldier kills Jennifer Laude. “Sa Bingit ng Panganib/Dangerous Work” shows the dangers to health and life of workers in factories, in constructions, in the mines, above ground, underground, and in the sea. Even nuns in Mindanao could not hand a letter to the Pope because the nuns were accused of being members of a militant organization. The poem, “For Security Reasons: Liham sa Santo Papa/For Security Reasons: A Letter to the Holy Pope,” is a strong reaction to the detention of the said delegation of nuns.

Also included in this poetry collection is a poem for Maita Gomez “Rosas/Roses”; “Sa Harap ng Tangke/Tanks,” which recalls the EDSA People Power, and other noteworthy and unforgettable musings. Joi Barrios further pays tribute to other friends and comrades like Behn Cervantes, parents who have lost a child, persons who have died young; her brave companions in street theater of yesteryears, her lament while in exile and during the pandemic.

Joi Barrios, however, not only writes about anger and grief but also about love and hope, not only about war but also of peace.

This last poem, of which there is no translation, speaks of unwavering love and trust.

Marra PL. Lanot
Marra PL. Lanot is a poet, essayist, and freelance journalist. She has published articles and columns in newspapers and magazines on the arts, culture, and politics. She also translates poems from English and Filipino into Spanish, just as her own poems have been translated and published abroad into foreign languages such as Spanish, Chinese, Korean, Dutch, and Japanese. Marra was an official delegate to several international literary festivals here and abroad. She spoke and read her works at the Kuala Lumpur World Poetry Reading; the first International Feminist Book Fair in Melbourne; and the first Hong Kong International Literary Festival; IV Encuentro Internacional de Poetas Mujeres in Oaxaca, among others. At the V Encuentro de Poetas del Mundo Latino, held in Mexico, Marra was the only delegate from Asia. At the 23rd Festival Internacional de Poesía de Medellín, Marra was the sole delegate from the Philippines. She also received a four-month grant to the International Writing Program in Iowa. Among her literary awards are the Palanca award for poetry in English, and another for her essay in English. Furthermore, she received the Catholic Mass Media Award for her columns in Filipino as well as the Balagtas award for a poem in Filipino. Her works include: Cadena de Amor: New and Selected Poems in English, Filipino, and Spanish. Quezon City: University of the Philippines Press, 2017. Dream Sketches, second edition. Manila: University of Santo Tomas Publishing House, 2013. Darna & Other Idols. Mandaluyong City: Anvil Publishing, Inc., 2012. Riding the Full Moon and Other Poems in Filipino and Spanish. Pasig City: Anvil Publishing, Inc., 2008. Witch’s Dance at iba pang tula sa Filipino at Español. Pasig City: Anvil Publishing Inc., 2000. The Trouble with Nick & Other Profiles. Quezon City: University of the Philippines Press, 1999. Deja vu & Other Essays. Quezon City: University of the Philippines Press, 1999. Dream Sketches. Metro Manila: Anvil Publishing, Inc., 1991. Passion & Compassion. Quezon City: New Day Publishers, 1981 (first printing), 1988 (second printing). Flowers of the Sun. Quezon City: Mayon Volcano Publishing House, 1970. Sheaves of Things Burning. Quezon City: Panitikan Publications, 1967.