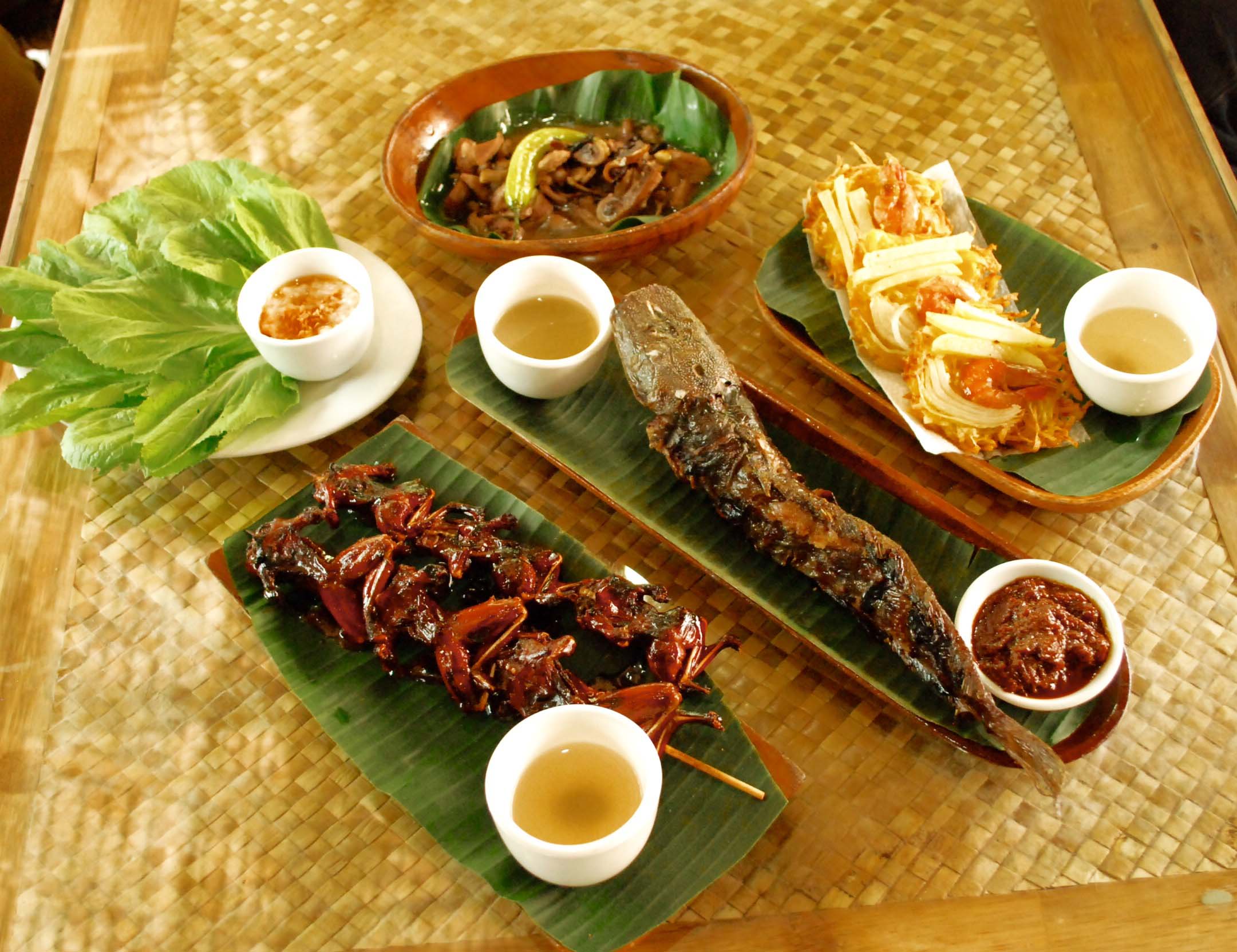 The Northern Luzon Expressway (NLEX), with its straight, smooth, and seemingly endless lanes can make one sleepy inside a van traveling to Pampanga on an overcast morning.

But the destination made up for the otherwise monotonous rhythm of our vehicle. Apag Marangle, a Kapampangan restaurant in Bacolor, Pampanga has a reputation for scrumptious and at times, exotic food. Dishes with ingredients like frogs or native insects that can make those with delicate stomachs think twice about lunch or dinner.

I’m the adventurous type. Tasted snake in Taiwan, bayawak in Binangonan, and even dog meat once, when I was very young and unaware that the dish served by an elderly uncle once barked.

We exited San Fernando, Pampanga and made for the road going to Subic, passing landmarks like Max Fried Chicken and King’s Royal Hotel. To get to the restaurant, one had to be mindful of that small opening on the left side of the highway. It’s a narrow path with the sign: Apag Marangle.

Getting off the van, I felt sorry for my black leather pumps. The ground leading to the restaurant was strewn with pebbles and small stones—a very quaint, decorative touch amid lush greenery, tall trees and dangling vines. But the back-to-the-countryside ambiance was hard for women wearing high-heeled shoes. Harder still on my poor pumps were the bamboo slats that made for a floor leading to picturesque huts built above a pond filled with hito (catfish) and dalag (mudfish). It was in these huts that guests dined.

I should have taken the cue. It was an out-of-the-way restaurant, far away from the posh dining joints of Makati. It’s just that I was on to another interview after this coverage and the next schedule required formal clothes. Tip to foodies: When going to Apag Marangle in Bacolor, wear comfortable flat shoes, sneakers or sandals.

Manuela Cherry Pasion-Tan is a petite, bubbly, and attractive woman with a flair for selling and a talent for Kapampangan cuisine.

She, her husband Ramil Bartolome, and their friend Mark Edmon C. Navarro started out as successful medical representatives in the 90s before the decided to venture into the restaurant business.

The constant traveling inherent in a medical representative’s job made Cherry opt for early retirement in 2005 so she could be nearer her children.

Three years later, Cherry and Mark put up Apag Marangle, a restaurant made up of huts on stilts, with a wide fishpond right under the huts. Cherry said she got the concept from the Kamayan sa Palaisdaan in Tayabas, Quezon—a restaurant she and her med rep colleagues frequented when Cherry’s company assigned her to Quezon province.

“I was assigned in Quezon province, and stayed there for seven years. We frequented Kamayan sa Palaisdaan. I loved the place, kasi presko, natural ang tubig, malamig. Maski ano ang ihain mo masarap [because it had fresh air, it was natural, and the water was cool. I felt anything that one served there would taste delicious].”

A restaurant business was also a logical next step since Cherry was a wiz at Kapampangan cuisine. In the early days of Apag Marangle, it was Cherry who cooked the dishes served to customers.

She related that her family came from Sta. Rita, a town in Pampanga that was known for superior, tasty food. Her aunts and mother all cooked well and Cherry learned to cook at an early age the vast array of recipes from Sta. Rita.

When Apag Marangle opened in April 2008, they didn’t promote right away, deciding to go by word-of-mouth. “We worked based on what we learned everyday and also banking on what we already know in handling customer service, having spent many years in sales.”

Cherry added that Apag Marangle is a family place. “It’s not even a drinking place because we close at 10 p.m. We serve beer but not hard liquor. Guests may bring their own and drink it here for a minimum corkage fee.”

Today, Cherry said their 6,000 square-meter restaurant has four cooks and a commissary. Guests can fish in their fishpond while waiting for their food, which usually takes 45 minutes to cook.

Said Cherry: “We grow tilapia, hito, dalag, but not for consumption because they come in different sizes. We have fishing rods we lend to customers who may want to fish. They can even take home their catch for free. Or they let us cook it for a minimum fee, so they can eat it here.”

Travelers, locals and balikbayans who come to Apag Marangle, delight in the traditional Kapampangan dishes the restaurant prepares and have become famous for.

According to Cherry, this is what makes their Apag Marangle unique, when compared to other restaurants that serve Kapampangan food.

“We don’t do fusion, we don’t do twist,” Cherry said, adding that they do not want to lose the original tastes and flavors to the dishes that made Pampanga the culinary capital of the country.

She noted that their best sellers continue to be traditional Pampanga dishes like tidtad (a Kapampangan version of the native dinuguan which does not use the thick liquid form of blood, and uses instead solid, coagulated chunks of blood); camaru (mole crickets sauteed or cooked adobo style); betute (frogs stuffed with seasoned ground beef and deep fried); and kare-kare (Philippine stew that comes with a thick savory peanut sauce).

Cherry said the supply of camaru is abundant only for two months every year—August to September of July to August. “After those months, no supply can be found. So, we really use our freezers to store as many as we can.”

Apag Marangle uses the freshest ingredients, Cherry noted, adding that they use fresh tamarind, guava, and kamias in their sinigang.

For group tours, a whole meal—from soup to desert, costs between P200 to P300 per head.

Buffets can go as low as P550, arranged for a minimum of 25 persons.

“We go by customer pricing. Tell us your budget and we’ll fix a meal for you,” said Cherry.

Bacolor is the main branch of Apag Marangle, with another branch in Marquee Mall in Angeles City, just a few kilometers away from the Clark Freeport Zone.

The rise of social enterprises and their value for meaningful work

Welcome to the exciting world of skydiving!

Pause for a Moment

Find Us a Rainbow(A Song)