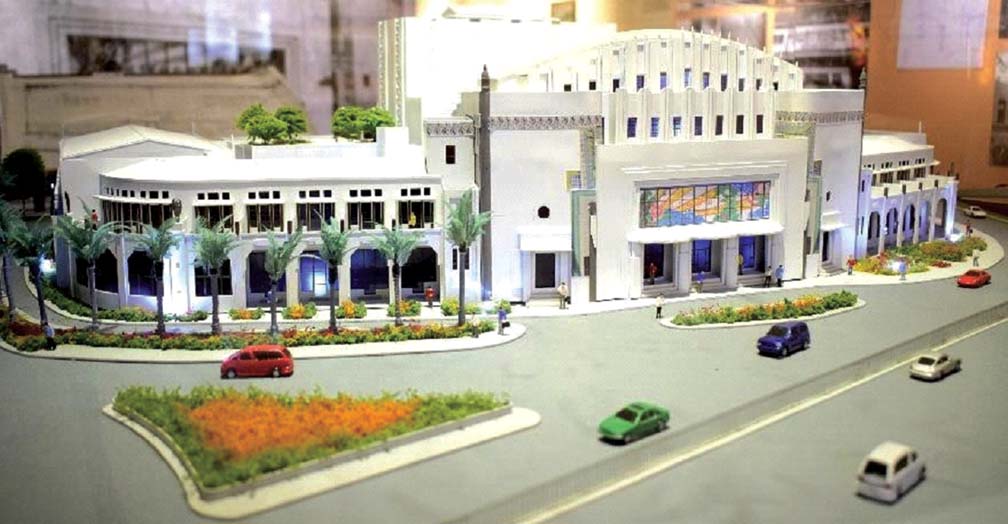 Juan Arellano’s corpus of work as an architect and a visual artist is suffused with a theatrical quality in which spaces are framed to embody spectacle and device of drama.

This exhibition—“Framing the Spectacle of Space”—at the Metropolitan Museum of Manila probes the creative life and works of Juan Arellano through the thematic lens of theatre and theatricality within the matrix of colonial pageantry, Hollywood and Broadway amusement, and architectural scenography.

Theatricality is about spectacle, appearance, and dramaturgy through the mediation and articulation of the lived spaces. Thus, every room is a stage, every public space is a theatre, and every façade is a backdrop.

Arellano is no stranger to performative prerequisite of theater and stage craft. When he was 18, he had a fight with his older brother Arcadio which forced him to run away to the United States.

With a goal of studying architecture, his ticket to America necessitate a kind of performance, acting his way to the colonial metropole by pretending as one of 147 Filipinos destined for the 1907 Jamestown Exposition in Virginia.

The visual, performative and commercial dynamics of such exposition and fair were meant to reinforce and legitimize the American colonial enterprise and civilizing mission in the Philippines.

Joining the group required character transformation, embodying the persona of a “native” acting as human display in the Philippine village at the exposition.

This episode as an actor in a staged colonial tableau vivant was gloriously narrated 20 years later in the article Noted Architect Once Posed as “Wild Man” at Jamestown in the January 1927 issue of New York Times.

As a painter, Arellano was trained at an early age under tutelage of Lorenzo Guerrero, Toribio Antillon, and Fabian de la Rosa.

Arellano’s paintings are specimens of episodic dramaturgy and impressionistic scenarios bursting in the whimsicality of color and spontaneity of strokes showing European influence reminiscent of Gaugin and Goya.

Most of his works are landscapes takes on an almost scenographic aura, consisting of the use of vivid, bold colors which do not show a strong naturalistic bias, and a surface treatment that emphasizes the shapes of nature without the use of visible outlining.

The forms are discerned as decorative and separate forms than as a cohesive and natural landscape.

The tendency towards compartmentalization is mitigated by his continued use of a more impressionist style of brushwork in which the atmospherics of space, ever-shifting qualities light and shadow, and the elusive articulations of hue and tone become his obsession.

His paintings with human figures are depicted in theatrical actions, transcoding gestures, costumes or entire staging of a scene with architectural backdrops and palpitating landscapes of vibrant colors framed by the symbolic proscenium–an illusionistic setting and enactment of drama.

Akin to a monologue, Arellano’s portraits reflect on the subjects’ inner psychological tension that energize and torments their being. Thus the spatial, two-dimensional, pictorial representation of scenarios and of actors is transformed into a narrative unfolding in the spectator’s act of looking.

Arellano’s architecture, landscape design, and urban forms creates exuberant spaces of spectatorship and performance, enframing the conduct everyday life and the staging of spectacle of the nation.

This trope also lays bare the deliberate ways by which the state stages an elaborate architectural spectacle and scenographic spatial interventions designed to mobilize mythic images of tradition and common rites of passage within the framework of a political liturgy and process of legitimation.

Capital cities, capitol buildings, and national monuments which Arellano had designed as Consulting Architect were potent symbols of national power.

Through his architectural spectacle, the state hopes to solicit the support of the citizenry and engender loyalty to the regime. The trope of state spectacle accomplished via architecture assured the fabrication of mass consensus and consolidated a unitary image of identity despite ethnic diversity.

Reared in the Beaux Arts classicism and City Beautiful urbanism, Arellano crafted the perfect scenography for Filipino civic life to flourish in a colonial social milieu.

The architectural and urbanistic interventions were intended to frame the American imperial cities in the Philippines and later the post-colonial metropolis of Quezon City. It was within the metropolitan civic center that environmental conditioning would take place, provoking among its citizen an obligatory state of patriotism and an unwavering obedience to the government.

The citizen’s presence as actors in the civic arena together with other citizens would cement pride in the city and arouse a sense of community among the heterogeneous urban constituency.

The theatrics of urban life nurtures the orchestration of spectacle that foregrounds the suspension of disbelief. Spectacle can manipulate thought processes through choreographed movements and events that divert the subjects’ attention and steer them away from reality.

Within this regimented space, the divide between colonial and indigenous, dominant and subjugated, rich and poor, and other dualities are temporarily blurred in theatrical moments that celebrate community and common rites of passage.

Arellano’s ephemeral architecture for the Manila Carnival were escapist setting for colonial amusement and spectacular pageantry which sustained the politics of spectacle.

Ultimately, it is through the spectacle of public monuments and state-initiated architecture that national memory is constructed or invented.

Nowhere is this architectural spectacle profoundly played out than the Metropolitan Theater.

Completed in 1931, the building was a source of great civic pride meant to complete the City Beautiful ensemble in Plaza Lawton. The theater marked a radical shift from Arellano’s classical lineage as he embraced the exoticism of art deco.

Art deco stood for modernity and escape from restricting traditions. The Metropolitan Theater allowed Arellano to explore native motifs with the aim of asserting their cultural independence in the colony. A country’s distinct flora and fauna replaced classical ornamentation. Nativist iconography is expressed in telltale Philippine details such as bamboo banister railings, carved banana and mango relief, and batik mosaic patterns. Native art provided new forms that were both “exotic” and national.

In a highly controlled colonial atmosphere, Filipinos crave for escape. Art deco was absolutely vital for the design of theaters and cinemas. The Met was built on a grand scale, dispensing ostentatious grandeur. Supremely theatrical decorative, the structure provided a fascinating escape which common Filipinos went for a mere price of a ticket. Drawn by the light of a projector or the spotlight, anyone could enter this temple, as if he or she were participating in a new religion, with the screen and the proscenium like a vast altarpiece.

Around the present-day Lawton where Arellano really made his mark, with all structures from the Pasig River to Taft Avenue bearing the vision of his signature, it is this theatricality that marks the history of the city as a center and at the same time as a vortex of a decline, or perhaps new metamorphosis as the curtain rises again for the Metropolitan Theatre.

The Metropolitan Museum of Manila, with the support of the National Commission for Culture and the Arts, presents “Framing the Spectacle of Space: Juan Arellano, Architect-Painter.”

A series of lecture and public programs are prepared in line with the exhibition. “Framing the Spectacle of Space” is on view until December 29.

CALL FOR LITERARY AND ART CONTRIBUTIONS FOR CCP’S ANI 42