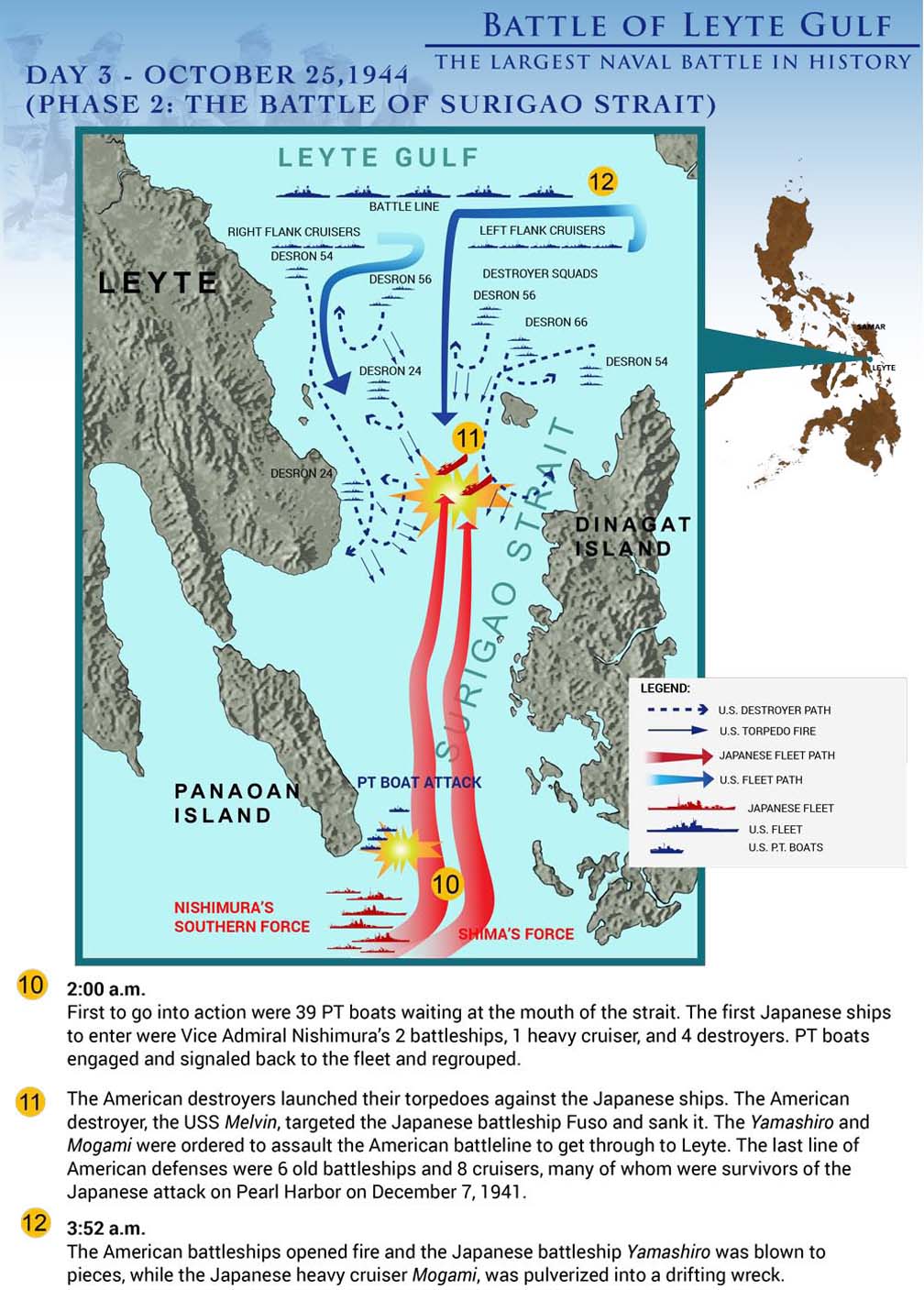 On October 20, 1944, General Douglas MacArthur led an Allied invasion force into Leyte Gulf. Protecting his forces were the combined might of the U.S. 3rd and 7th Fleets against any Japanese attempt to interfere in the liberation of the Philippines. The Japanese mustered their remaining warships into four powerful fleets in order to defeat the Allied force. The Japanese plan was to use one of their fleets to draw away the protective cover of the powerful U.S. 3rd Fleet while the remaining three would attempt to dash into Leyte Gulf from San Bernardino Strait and Surigao Strait and destroy the hapless transports and light warships of the Americans. This would eventually be known as the Battle of Leyte Gulf which was fought from October 23 to 26, 1944 and consist of four sub battles, fought at Sibuyan Sea, Cape Engaño, Samar Sea and Surigao Strait. The Battle of Leyte Gulf involved 282 warships and almost two thousand combat aircraft of the U.S., Japan and Australia and ranks as the largest naval battle in World War Two and considered by some to be the largest in world history. The Japanese were badly beaten in this battle and lost 29 irreplaceable ships of which three were battleships.

On October 24, 1944, coming from Brunei, Vice Admiral Shoji Nishimura led his fleet into Surigao Strait. He commanded the battleships Yamashiro and Fuso; the heavy cruiser Mogami, and the destroyers Asagumo, Michishio, Shigure and Yamagumo which approached the battle area in a column. Facing him was a combined U.S. and Australian force that was fully aware of his progress due to an earlier air raid in the morning, and then in the darkness were assisted by radar tracking from scores of Allied destroyers and patrol torpedo (PT) boats. The Allied fleet under the command of Rear Admiral Jesse Oldendorf, was arranged in lines perpendicular to the approaching Japanese at the exit of Surigao Strait. This was the classic naval maneuver known as “Crossing the T” wherein his ships could fire broadsides using all their guns while the Japanese would be limited to replying only with the guns of the lead ship.

The battle started on the evening of the 24th and the PT boats and destroyers attacked with torpedoes. The Allied destroyers scored numerous hits with their torpedoes and immediately knocked out Fuso and Yamagumo which sank in the strait. Asagumo was badly damaged and was sunk a few hours after. Yamashiro with Nishimura on board and together with Shigure, Michishio and Mogami stubbornly proceeded into the awaiting U.S. battleships and cruisers. Yamashiro sank with guns still firing in anger after being hit repeatedly by enemy cruiser and battleship fire and Nishimura went down with his ship. Michishio sank beside Yamashiro. Mogami and Shigure managed to escape but only to run into a smaller Japanese naval force that also steamed in Surigao Strait which was commanded by Vice Admiral Kiyohide Shima. Mogami which was already damaged in the fight in the strait, collided with the heavy cruiser Nachi of Shima and sustained additional damaged that doomed it. Later in the day it was scuttled somewhere near the entrance to the Surigao Strait. Only the destroyer Shigure survived among Nishimura’s force. Shima who was supposed to also proceed into the battle area with two heavy cruisers, one light cruiser and seven destroyers had a change of heart and decided to withdraw and had no contribution to the Japanese effort.

Approximately 4,000 Japanese sailors lost their lives during the fighting at Surigao Strait while only 39 Americans were killed. Japanese sailors who managed to escape their sunken ships ran afoul of Filipinos on the beaches of the surrounding islands. Six Japanese warships lie in the depths of the waters of Surigao Strait. 73 years later, they still lie there, almost forgotten by the world.

At least, for Surigao City, the battle has not been totally forgotten. For quite some time, since 1994, through the efforts of local historian Fernando Almeda Jr., who together with the Surigao city government worked hard for the commemoration of the event. A marker to the battle had been erected at Surigao City at the Lipata Ferry Terminal. The HMAS Shropshire-HMAS Canberra association donated a plaque to the memorial that also highlighted the role of Australian servicemen in the battle.

Since then, every year thereafter, ceremonies have been held at the marker site to commemorate the battle. In the past few years though, the ceremonies have become more elaborate as foreign dignitaries and other guests have been invited to the activities. It should be pointed out here that the Japanese government has shied away from participating in any of the commemorative events of the battle and it is only the U.S. and Australia who send representations.

Current commemorations are a result of the initiatives of Jake Miranda who is a former officer of the Philippine Navy and also that of the Surigao City government led by Mayor Ernesto Matugas Sr. Mayor Matugas directed several members of the city council, Councilors Ernesto Matubis Jr and Sim Castrence who all together with Surigao City Tourism Officer Roselyn Merlin to ensure continued support by the local government in activities commemorating the historical event. Support for this is widespread in Surigao City that even the private tourism organizations led by City Tourism Council President Richard Amores have included sites commemorating the battle to be included among places to be visited by tourists and history buffs. This makes Surigao City one of the few tourism locations in the country that have a balanced approach to tourism that features not just scenic attractions but also a good focus on historical awareness.

There are currently four locations in Surigao City that commemorate the battle. These are the above-mentioned Battle of Surigao Strait Memorial Marker that was erected in 2001 at the Lipata Terminal.

The Japanese Cremation Memorial Site at the Surigao del Norte National High School which was set up in 2007 through the efforts also of Almeda and the Surigaonon Heritage and Cultural Center and maintained by the Surigao City government through the Tourism office.

A commemorative marker at the grounds of the Punta Bilar lighthouse which is also the planned site of a future larger memorial.

One of the most recent and most popular attractions for those visiting the City of Surigao is the Battle of Surigao Strait Museum that is located at the Luneta beside the Surigao City Hall. The museum showcases diorama displays of the battle, Japanese wartime military equipment recovered from an underwater wreckage, scale models of ships and aircraft used in the battle and an authentic airplane launched Type 91 torpedo which was recovered at Dinagat island in 2012. This torpedo was the same type and model used by the attacking Japanese fighter bombers in Pearl Harbor in 1941. There is no other torpedo of its kind in the world with its added distinction of being used in a famous battle, did not hit its target and remained intact even after more than 70 years underwater. Entrance to the museum is free and it has become a favorite of local and foreign tourists and also of students.

Searching for the Ships

Throughout the decades some people have wondered where the wrecks of these Japanese ships rest at under the waters of Surigao Strait. Some divers have claimed to have sighted the ships but these have always been dismissed as being an impossible feat. This is because strong underwater currents prevent divers from diving safely to investigate the wrecks, granted they even know where it is. Many have their own reasons for doing so. A love of maritime history, marine engineering research purposes in assessing damage to ships and a desire to honor the war dead motivate them.

Last year, in 2016, an attempt was made to locate the resting places of these ships. There was ample research material to narrow a search area where the ships would be located. This attempt was a collaborative effort of a local team led by Jake Miranda and several Japanese private citizens, Mana Kubota and Mutsumi Takeya. From a boat, simple sonar scans were done on the seabed of the strait to locate anomalies that probably would pinpoint the location of the sunken warships. The underwater scans were aided by equipment from EGS Asia Inc., which was the team that had successfully located the sunken plane wreck that contained the body of Secretary Jessie Robredo and his pilots.

Sonar scans produced by that survey showed what appeared to be large anomalies that were not formed by nature thus pointing to the possibility of a wreck. Given the high probability that these signatures belonged to some of those sunken ships, prayer ceremonies and floral offerings were done on these locations. Takeya’s grandfather served at the Surigao garrison in the war, and he felt a kinship to the Japanese sailors who died in the battle. Although there were plans to continue the scans later in the year, legal complications from the national government prevented additional ones from being carried out.

However, interest still remains as to the whereabouts of these ships and the actual conditions that they are in.

In 2015, Paul Allen, the co-founder of Microsoft announced to the world that his research team had located and videoed the sunken Japanese superbattleship Musashi in Philippine waters. A new party was about to come into the scene to search for the sunken ships of Nishimura.

On October 24 2017, a day before the 73rd anniversary of the Battle of Surigao Strait, RV Petrel, the state of the art research vessel of Allen steamed into the Port of Surigao with the primary intent to explore the possibility of searching for those ships.  (To be continued)

Reynaldo Abilo—from scholar to being somebody

COVID-19 and the Filipinos in Vienna, Austria