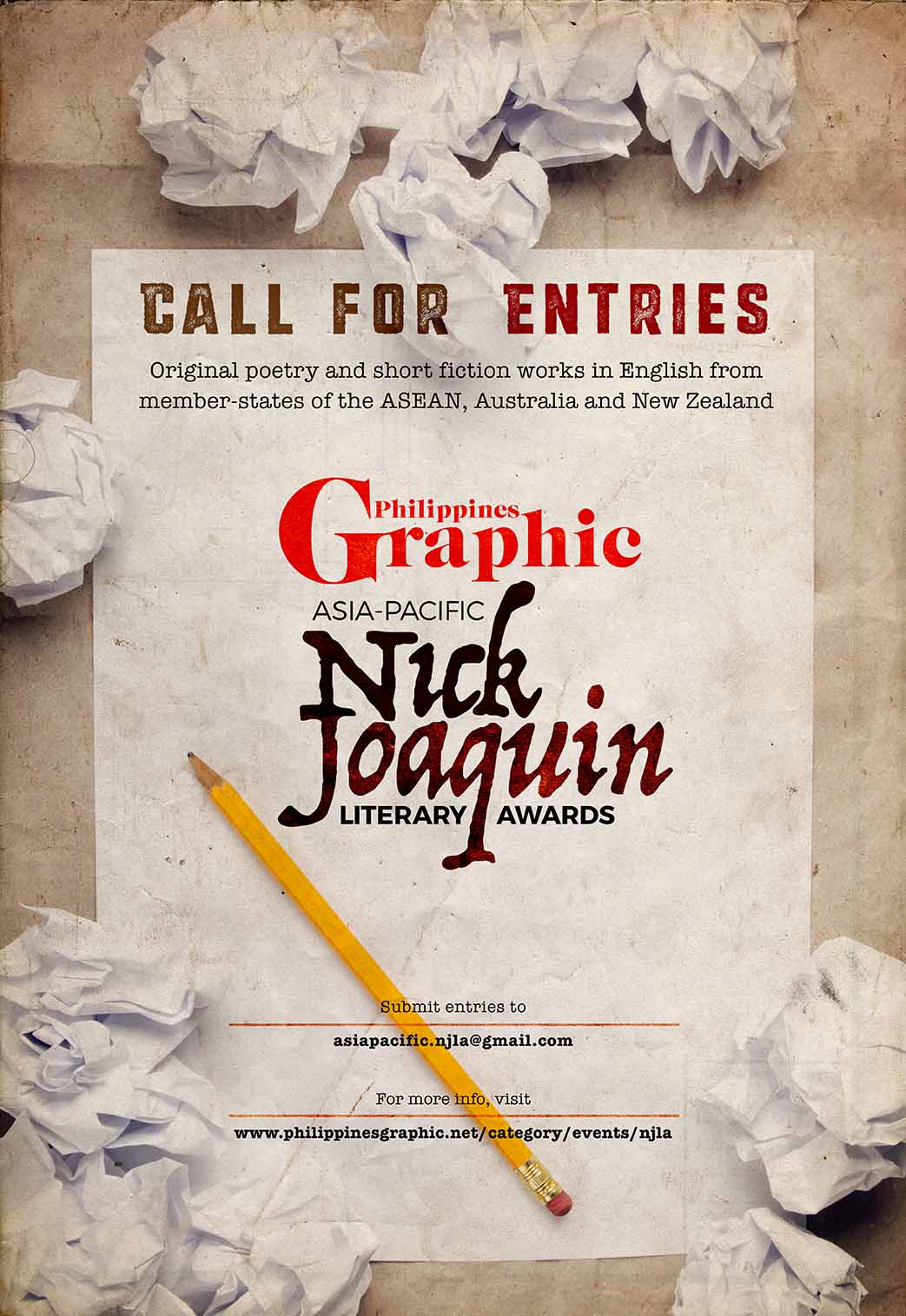 We at the Philippines Graphic and our sister-broadsheet, the BusinessMirror, are very pleased to announce the expansion of the Nick Joaquin Literary Awards to member nations of the ASEAN, Hong Kong, Taiwan, and New Zealand and Australia. We have opened the Asia-Pacific NJLA, named after the first of our country’s National Artists, the poet, storyteller and journalist Nick Joaquin.

Our publisher, T. Anthony Cabangon announced this plan two years ago and we at the Graphic and BusinessMirror are very happy to open the contest. We look forward to reading and publishing the best pieces sent to the inbox we’ve designated for just this purpose: asiapacific.njla@gmail.com.

1. The NJLA will accept previously unpublished entries of original poetry and short fiction works in English (written originally in English, or translated into English, with credit given to the translator if the translator is not the author) from residents of member-states of the ASEAN, Hong Kong, Taiwan, Australia and New Zealand making up the countries in the NJLA Asia-Pacific.

4. The contest secretariat and Literary Editor of both the Graphic and Business Mirror will only select for publication works that have not been previously published in any online or print publications—including, but not limited to, periodicals and anthologies.

5. The cash prizes for the fiction winners of the Asia-Pacific NJLA, given in US dollars, are as follows: $1000 (first prize), $600 (second prize) and $400 (third prize). A single Tony & Nick Poet of the Year will be selected by the panel of judges and the Philippines Graphic Literary Editor and will receive a cash prize of $1000. Authors whose works see print in Tony & Nick will not be paid any honoraria, but the NJLA Secretariat is also not charging any fees to include the authors’ works in the Asia-Pacific NJLA contest.

6. These prizes, and any other prizes the Asia-Pacific NJLA sponsors may see fit to add to the prize pool, will be given to the winners during the Asia-Pacific NJLA awards night in the Philippines. The winners and the international judge will be transported to and billeted in Manila prior to the awards night and provided with transport back home, courtesy of the contest sponsors. Any visa requirements for Australia and New Zealand residents will be shouldered by the winners.

7. The contest period for this cycle of the Asia-Pacific NJLA will cover all works accepted for publication by the Literary Editor from March 2018 to July 23, 2018. (Acceptance for publication means the work will be published, at the earliest, on the week immediately following the written acceptance of the manuscripts emailed to the authors).

10. The winners will be notified via an official email sent by the Literary Editor by mid-August 2018 and the details of their travel to and stay in the Philippines will be coordinated by the NJLA secretariat.

Is the Asia-Pacific NJLA open to Philippines-based writers?

No. We have the regular Nick Joaquin Literary Awards for that, and the prizes are equal. The Asia-Pacific NJLA is to be conducted IN ADDITION to the NJLA we all know and love. The Asia-Pacific NJLA is for writers who live and work in Brunei Darussalam, Cambodia, Indonesia, Laos, Malaysia, Myanmar, Singapore, Thailand, Vietnam, Hong Kong, Taiwan, Australia and New Zealand—including expatriate Filipinos. Submissions to the regular Literary Section of the Philippines Graphic from authors located in other countries will be published in the Tony & Nick section of the Business Mirror from here on in, if they make the cut.

What kinds of work will be published in Tony & Nick under the Asia-Pacific NJLA?

We are seeking short fiction and poetry in English. All works sent by writers in these countries/territories must be in English–whether by translation or originally so.

What are the modes of submission to the Asia-Pacific NJLA?

We accept works submitted via email, to asia-pacific.njla@gmail.com. Please do send a brief bio note along with your work so we will know where you are located, as well as be able to tell our readers a bit about you.

Because private messages on social media cycle so fast, we discourage the submission of literary work to us via attachment to a PM over Facebook, or via DMs over Twitter or Google +Hangouts. We would hate to miss your submissions just because they get swamped under other private messages.

What text formats do we accept?

We prefer to receive work formatted in MSWord, .txt and .rtf, with the font set at 12 points, Times New Roman.

If their bylines are shorter versions of their full legal names, the authors should also include their full legal names, as appear on their valid government IDs (passports, driver’s licenses, social security IDs), as well as proof of residency in their home or host countries in the information they send along with their literary submissions.

How long must a manuscript for fiction be?

How many poems will you accept per submission?

We will accept between one and two poems for publication per submission. Any additional poetry may or may not be accepted for future publication. The Literary Editor will inform the author of this as part of the acceptance email she will send to the author, should this be the case.

What is the interval between pieces for authors making multiple submissions?

A minimum of three months is the set interval between multiple submissions by the same author – if the Literary Editor deems these works good enough to see print.

We do this so that we can give the best exposure to all qualified works by all the authors who send us their best work.

Does the Literary Editor read all literary submissions?

Do the contributors always get replies to their messages?

Due to the volume of submissions in the regular literary section of the Graphic and in Tony & Nick, the Literary Editor cannot reply to all emails/messages sent to our email. We will, however, always inform authors whose work has been selected that their work will be published and we will answer queries as best we can.

How does the Literary Editor select which works will be published?

The basis for selection is really the quality of the work. When we encounter unusual or incorrect grammar and usage, we read the work over again to gauge if the author is deliberate in these verbal gymnastics and whether it contributes, overall, to the author’s intents in writing the piece.

If not, we edit the manuscript to correct errors in spelling, usage and grammar before publishing the work – and we do that only if the piece is so compelling that we are willing to go the extra mile of editing to publish it.

We do not publish works that use profanity just so the author can be profane. While we are not prudes and recognize that, in some pieces, profanity is an intrinsic part of the story or poem, we believe that, like strong spices in a dish, profanity is best handled with care and specific purpose.

What we seek are stories and poetry that will be good reads—and we will publish those.

How do I improve my chances of being published?

Send in your best work. Proofread your work before you submit it to the editors and avoid sending us “works in progress.” That will only delay the process of getting your pieces published, because we will know it is a draft and only a draft and our inclination to publish it will wane.

We value professionalism in our authors and we would much prefer to see works that have been polished and sent in as error-free as possible. Then we can focus on reading what you have to say instead of on what you did not intend to show. Professionalism means you take pains to remove all possible typographical, grammatical and usage errors from your text.

Sloppy work sends us this message: You couldn’t care less about whether people will read you or not – all you want is the kick of seeing your byline – then we will not be inclined to publish you. This type of submission usually gets sent to the Recycle Bin Laden of our PCs or, if sent by snail mail, straight to the physical trash bin.

Does the Asia-Pacific NJLA publish only known authors?

No. We publish pieces we deem to be good. While established authors are already known for the quality of their work and are read for this reason, we are also open to new, untried talent.

Part of the mission of the Philippines Graphic and the Business Mirror in mounting this competition is to keep literature in the region alive and dynamic. We would not be able to fulfill that mandate if we limited ourselves to only the writers who have achieved success in whatever form or degree. We seek for fresh works from new voices.

What are the qualifications of the Literary Editor?

She is a journalist and literary writer whose poetry and fiction has been anthologized and published in the Philippines Graphic and other publications both local and overseas.

What should I do if my work is rejected/not published?

Keep writing. Keep honing your skills. Keep submitting your work to us until you do get published. If you feel that the rejection of your manuscript means writing is not for you, it isn’t.