The panel of judges for the 2018 NJLA was composed of Gawad Balagtas awardee Susan Severino Lara, who chaired the panel; award-winning writer and Esquire Editor-at-Large Angelo “Sarge” Lacuesta and; University of the Philippines Professor Emeritus and internationally-awarded poet Gemino Abad. The final deliberations were held at the conference room on the third floor of Dominga III Bldg. on the corner of Don Chino Roces Ave. and Dela Rosa Street in Makati City on Aug. 24, 2018. The deliberations were documented on video.

Ramil Digal Gulle was named Poet of the Year, a publisher’s choice award in which the magazine’s Publisher, Editor-in-Chief and Literary Editor select the winner based on the quality of the author’s poetry that was published in the Literary Section of the Graphic during the contest cycle.

Graphic Editor-in-Chief Joel Pablo Salud and Literary Editor Alma Anonas-Carpio have served as judges in literary contests, including the annual Don Carlos Palanca Memorial Awards for Literature. They are also members of the Manila Critics Circle that judges the annual National Book Awards. 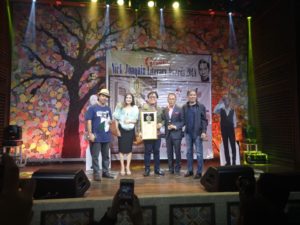 The fiction entries to the 2018 NJLA were sent by courier weeks before the final deliberations to the judges as a double-blind manuscript—all the stories were printed in uniform typeface on 8”X11” bond paper, without the authors’ bylines. The literary editor kept a list of all the stories entered into the competition and the names of their authors, which she only allowed the judges to access after they made their final selection of three winning pieces and three honorable mentions.

The final deliberations were held on Aug. 24 at the conference room of the Graphic on the third floor of the Dominga III Building in Makati City, a process that was documented on video. The panel of judges was unanimous in selecting “The Visitation” as the first prize winner, after which Lara asked the rest of the panel a tongue in cheek query: “May ipaglalaban ba kayo ng patayan (Is there a piece you will fight for to the death)?”

At the end of the deliberations, this literary editor asked a “bonus round” question: “Can you name the author of the first place winning story in one paragraph?” Lacuesta’s guess was Sage Alfar, the daughter of National Book Awards judge Dean Francis Alfar. Sage holds the distinction of having been the youngest author to have her work published in the literary pages of the Graphic (she was 13 when her first story saw print in our pages).

When this literary editor revealed the names of the winners and the honorable mentions, the judges expressed both surprise and delight: Some of the authors on this select list attended workshops with them and first prize-winner Campilan was on a roll, with several literary wins under her belt just this year. 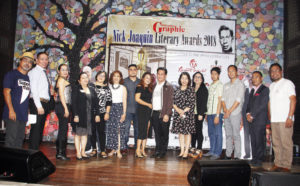 When the Graphic was still the Weekly Graphic and the newspapering Roces family still owned it, the magazine gave monthly prizes to the best short fiction to see print in its pages. The prizes were modest, but the recognition encouraged authors to send in their best work.

The magazine has changed ownership over the years, and it was padlocked during the Martial Law years. When it finally became part of Ambassador Antonio L. Cabangon Chua’s Aliw Media Group, the Graphic literary section was revived along with the rest of the magazine and, with it, the literary contest, which was made an annual event that highlighted the company Christmas party.

National Artist for Literature Nick Joaquin was the editor in chief and literary editor of the resuscitated Graphic and he called the annual literary awards the Philippines Graphic Literary Awards. The contest was renamed in Joaquin’s honor after his death in 2004.

Now the NJLA is in the process of spreading its wings: The Graphic now has literary pages in its sister publication, the Business Mirror broadsheet. The Tony & Nick section is a bi-monthly literary spread that carries short fiction and poetry in English from writers in ASEAN member-states, Taiwan, Hong Kong, Australia and New Zealand. Residents of these locales, including overseas Filipinos, are part of a growing pool of authors whose work appears in Tony & Nick. These stories and poems are entered into the competition for the 2018 Nick Joaquin Literary Awards Asia-Pacific, which will be conferred to the winners at an awards night in Manila come the first quarter of 2019.

It is time to spread our wings and seek the sky.