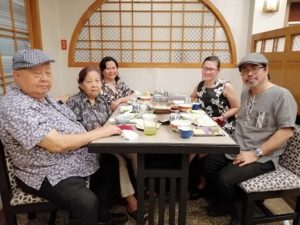 I’ve had a couple of occasions where I joined Manong Frankie and his wife Tessie for dinner: twice at a Japanese restaurant, the other, lunch at a lumpia place a stone’s throw from the Solidaridad Bookshop.

On one occasion, he invited me into his lovely home in Quezon City, where on the eve of our trip to Rosales, Pangasinan, the writer’s hometown, I had a taste of the wife’s special cooking.

This time it was Tanabe Japanese Restaurant, a posh, friendly space located right along Remedios Circle. We arrived a little past six in the evening and proceeded immediately to our reserved table.

While browsing the menu, I caught of glimpse of the beloved National Artist who sat from across the table. He appeared rather weak, exhausted. That undeniable droop of his eyes and the overall expression on his face told me there was more to this than mere physical exhaustion.

Earlier, I was told that Frankie had to stay in the hospital for three weeks due to a bout with pneumonia. That could spell danger for anyone over 50, and Frankie, quite frankly, is 94.

I was glad he still had his wits about him, though, and that hearty laugh whenever I hurl a joke or two in the air. His appetite, regardless of what he may have been feeling at the time, was anything but old.

As was his habit, Frankie asked me the run-through about my latest books, my job at the newsroom, and about family life. So far as I could tell—and I do can tell, having been a working journalist for some time—he was never anything but sincere in his inquiries.

It was kind of dull speaking about my life, and hoped he would begin about his. I had long since known that there’s more to gain by way of listening to this novelist’s stories than any I could relate at any given time. His memory of all he had experienced back in the 1940s and 1950s were as sharp as the very day they happened.

And so he dispensed his tales with little qualms as to what others would think, always with the mind to get into the nitty-gritty of things. Frankie remains a stickler for details, an extremely admirable quality among novelists.

He spoke of writers who were both strangers and friends, people and places I hardly knew, all this time weaving a finely-stitched caricature of his era. At 94, nothing about him even remotely suggests a failing of his intelligence and wit, still holding on to his sense of humor and of history, while tipping me with a lesson or two on the writing life.

A lot of things had been said about Frankie of late, some too unkind to even recall. I’ve heard friends mock his penchant for being too outspoken, speaking and writing with the sort of “irrationality” that hardly fits the present-day sentiments of many young “woke” folks.

That, to me, is quite understandable. We are all a product of our time and the experiences which had molded our understanding of our world. This is true even for me who, at 55, already feels I’m a square peg in a round hole, a veritable planetary alien to the age and era of my children.

What endears me to this man is his forthrightness, and a generosity of spirit rarely seen among writers of renown. While Frankie and I may not see eye to eye on a number of issues, I know there is always something to learn from a man who had seen and lived through much of this country’s history. And he’s only too willing to share them.

Our dinner ended in good spirits. We went our separate ways with fresh information at hand. As I saw him off, I felt simultaneously sad and happy. Sad that I felt time is not on our side, and happy because I had been given the honor to meet and know this author. It probably would take another century before another author of his caliber and dedication to the craft would surface.

Afternoon of the next day my wife and I arrived at the University of the Philippines’ Vargas Museum for Rio Alma’s book launch. It was a festive moment when, after the formal launching of the book, Bakit Kailangan Natin si Pedro Bucaneg, the Makatas lunched their balagtasan.

The overall festive mood turned serious sometime the end of the festivities. Luna Sicat Cleto and Grace Banez had introduced me to historian Mila Esguerra and Prof. Fe Mangahas at the dinner table. Little did I know that a very timely discussion involving the Philippine Revolution and the life and struggles of Oriang, the wife of Andres Bonifacio, had kicked off prior to the reception.

Well, it was agreed upon by us that what was shared by Mila Esguerra would be better left unpublished for now. Suffice it that what we talked about that night led Mila Esguerra to tears, and us in complete and utter surprise.

Now, how many historians do you know who’d feel so deeply about our history that it drove them to tears? Proudly, I can name one.

My wife and I reached home past nine that night. I remember telling her as we tucked ourselves in bed how sad I feel. What I saw these past days was a slowly fading generation of brilliant Filipino writers and thinkers—Frankie at 94, Bien 86, Rio 75—and the rest of those too weak to walk—historians, professors, poets–but never too weak to think and remember.

“What’s going to happen now?” she heard me say. “People like this come few and far between.”

She cupped my face and said in reply: “Just be happy we were honored to have them as friends. Take courage in the fact that there were young writers there.” After which, my wife kissed me goodnight.

As was my custom before calling it a day, I grabbed British philosopher Bertrand Russell’s book, Portraits from Memory and Other Essays, and read out loud the last lines of his piece “How to Grow Old”:

“I should wish to die while at work, knowing that others will carry on what I can no longer do, and content in the thought that what was possible has been done.” G

Straight out of the Führer’s handbook