Lost Angels in Shanties: The Hybrid Children of Riverside 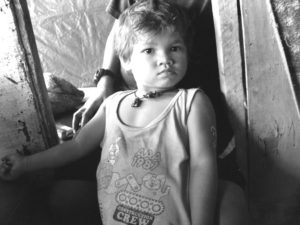 Nestled under a large bridge in Hensonville Riverside, Barangay Malabañas are thousands of informal settlers who have made the searing pavement of Abacan River’s dike their home. True to its old Spanish name, El Pueblo de los Ángeles (The Town of Angels), Angeles City in Pampanga has served as a refuge to countless people—including the lost and abandoned children of the city’s sex tourism industry.

Viewed from the foot of the bridge, there are already clusters of makeshift homes lining the southern wall of the dike. Beyond this loose ring of shanties are hundreds more that stretch in all directions, creating an endless web of recycled tarpaulins, bamboo scraps, rusty corrugated roofs, patchworks of corkboard, old plywood, and termite-ridden beams and planks crisscrossing each other at the oddest angles.

Our guide, 60-year-old Ponciano Pones, is a native of Samar who worked part-time as a tanod and full-time as a jack of all trades. His dark, crinkled face and easy smile were comforting in the 30+ degree heat. “You’re looking for children of foreigners? Naku! There are a lot of them where I live,” he said confidently.

After navigating our first labyrinthine warren of tightly packed houses, we came upon a tiny sari-sari store and an equally small abode with a concrete base and a patchwork of plywood boards for walls that were decorated by the latest posters of local politicians gunning for reelection. “This is home,” Ponciano said, somewhat proudly. He invited us to seat ourselves in an open room beside the sari-sari store. A few minutes later, a diminutive woman sporting a man’s haircut and a black shirt approached us hesitantly.

Twenty-three year old Mary Ann Pacursa Osis, a native Visayan, was barely out of her teens when she was impregnated by an American sex tourist. She spent roughly two years as a sex worker or walker in Balibago, Angeles City, first at Gecko’s Bar, and then in the more luxurious High Society Bar on Walking Street—Angeles City’s answer to Thailand’s notorious Pattaya district. It was at the High Society Bar where she met her only child’s father.

She was candid about what happened to her, and says that she’s ‘had it’ with being a sex worker. “It’s been some years since I’ve been to Walking Street. I no longer work there. Nowadays, I sell fish to make a living, to buy milk for my baby.”

Mary Ann now works as a fish vendor along Angeles City’s main thoroughfare, in front of Robinson’s Mall, a well-known landmark in the city. She works in the evening to provide for herself and her child, three-and-a-half year-old Steven. In recent years, she’s made herself effectively homeless, jumping from one place to another, to avoid being a ‘burden to family and friends.’ Mary Ann also has a female live-in partner now.

Her child, who she says is always with her in her wanderings, has a round, cherubic face and a curly tumble of deep brown and blonde hair. His bright, curious eyes are a mix of brown and black. His skin, though slightly browned from playing too long under the sun, has an unmistakable Caucasian hue.Ponciano, our guide, chirped “Amerikanong hilaw! (Undercooked American!)” when he saw Mary Ann’s toddler. Steven’s father was never located, and Mary Ann gave up trying to find him to get any amount of support for her child.

She hugged Steven tightly. Steven showed us his fading Captain America toy tattoo proudly. “My one wish,” Mary Ann said, “is for Steven to be able to study and finish college.”

“That’s all I really want for him,” Mary Ann said, satisfied with her thoughts.

Rezie (not her real name) was sitting at the doorway of her home, carrying her infant, RJ, when our trio passed the northern cluster of shanties that bent outward, toward the lip of the dike.

Her youngest child, RJ is nine months old and looked every bit a Caucasian, with his thin swathe of brown-blonde hair, strikingly high-bridged nose, and porcelain white skin. His mother has a deeply tanned complexion, jet black hair, and a small, flat nose.

RJ floated like a bottle of milk in his mother’s arms. Rezie smiled at us when we asked if RJ was indeed the son of a foreign father. “American,” she said in a matter-of-fact way, as she stood up to follow us to a quieter section of the neighborhood.

Like Mary Ann, 29-year-old, Visayas-born Rezie worked at Walking Street in Balibago to eke out a living as a walker when money was extremely hard to come by. “But I have a real husband, a Filipino. I tried my luck at Walking Street when he had no work, and we had absolutely nothing.”

Rezie met her Filipino husband, a construction worker, when she was just 20 years old. She’s had five children since then—including RJ, who is the most ‘special’ of her brood.

“Never in my life did I imagine that I would get pregnant. It wasn’t in my vocabulary to have a foreigner’s child. So when this one (RJ) came out, imagine my husband’s shock. His other siblings are maitim (dark-skinned) and pango (flat-nosed), well what about him? Look at his [aquiline] nose, and he came out yellow.”

Rezie’s expression hardened when asked about RJ’s father. “I don’t know his real name, but I know his face. I know I can recognize him when I see him in public. All I know is the name he gave me—Tony. I still remember the month, the day that he took me to that hotel in 2017. I was the only girl who got drunk in that room; there were two other [women]. I tried asking the bar for his name and the hotel, too. They won’t help me. They say that guests’ names are confidential. I really tried, because it’s for RJ.”

She says that she is no longer interested in sex work, because of the possibility of being impregnated by a foreigner—again. “I’ve stopped [being a walker] after giving birth to RJ because of my husband; he’ll kill me if this happens again.”

Allan Pabillonis only 14 years old, but he towers over everyone else, being the only six-foot teen in the neighborhood. Larger than life like many African Americans, his biracial lineage is unmistakable. Handsome, with gentle eyes, tight, curly hair, and with bone structure like Denzel Washington’s, he walked to us shyly, sporting his best Sunday polo shirt, shorts, and a plastic watch.

We met Allan’s grandmother a few minutes earlier. She sold cooked rice and ulam at the terminal end of the outer cluster of shanties. She sounded hoarse from heat exhaustion, but her eyes moistened when she entreated that her grandson be interviewed. “I have a grandchild from an American. He is a negro. He is my grandchild. I am his mother’s mother.”

During the first few minutes of the conversation, Allan’s aunt provided us with some details: Allan’s mother, Maricel Pabillon, had been a walker too, and was impregnated by an African American (with Allan as the offspring of that union) and by a white American (the second eldest child in the family).

Allan has five other siblings. The youngest lives with his mother in Palawan. His mother lives with her sibling, and has not been to Pampanga in years. Allan says that it’s nothing, and he doesn’t really miss his mother. He has been under the care of his lola for years.

He shrugged mildly when I asked him about his father. “Mama never told me about him. I don’t even know his name. I never really asked who he was. He never looked for me, either.” He remained detached with a poker face while I asked gently about the possible whereabouts of his father. He knew nothing, and cared not for the guy, either. Or at least, that’s what he wanted us to believe.

Allan brightened a little when I asked about his favorite pastimes. “I like playing basketball. My friends, they call me Lebron. Because I’m really tall. Sometimes I play at the computer shop, too.”

He smiled wider when I asked him about the perfect time to marry. “That would have to be when you have a job, and when you are really ready for that. Otherwise, no way.” He laughed when I prodded him about having a girlfriend. “I have none,” he said, looking at me seriously.

Despite some obvious hurdles, he is hopeful for the future. “My dream is to become a programmer one day. You know, doing computers. That’s what I want. I want to work in Japan as a programmer. I’m good with math, a little. But I’m not an honor student. I am quiet in class, too.”

Before we left Riverside, many more families with hybrid children surfaced, each clamoring for a little of our time. With the exception of one woman who claimed that she was receiving a small pension from the American who impregnated her (the sex tourist had already died due to old age), the remaining families all had similar tales to tell—that their children were either abandoned or denied by their fathers.

As we looked at the sad faces of these mothers, aunts, and grandmothers who were somehow still hoping for support and justice for what had happened to their daughters, sisters, and grandchildren, one cannot help but wonder—when will the lost angels of Angeles City finally be free?

Marius Carlos Jr. is a journalist and independent researcher from Pampanga. Send your thoughts to mariuscarlos.jr@gmail.com