The Prez & the press: What in blazes happened? 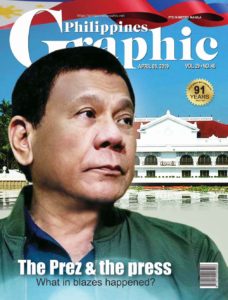 It’s inevitable: Rodrigo Duterte and the press will never see eye to eye. There’s simply no way around it. Not now, and perhaps, not ever.

No reconciling the hunger for truth with the capriciousness of government power. No union between the facts and the fanatical. No treaty between the reasonably malcontent and the cleverly nonsensical.

It has come down to this: not only is it a battle about who gets to say what needs saying in a country too dead to listen, it has become a war for hearts and minds too busy with their sorry lives that not a minute is spared to process whatever information is at hand.

These two powerful institutions are so at odds with each other it’s almost heartbreaking to see them battle it out for supremacy. To remind us of what this means for people who sit at the sidelights, here are Nobel laureate Mario Vargas Llosa’s words:

Will this ever end? Could society hope for yet a parallel world where government and society’s journalists and the intelligentsia would come to an agreement? Or, as in Voltaire’s words found in his novel, Candide, “terrified, amazed, desperate, all bloody, all palpitating, said to himself: If this is the best of possible worlds, what then are the others?”

With journalist Maria Ressa’s recent arrest at the airport a day after Duterte’s 74th birthday, it seems all doors must remain closed—for now. It appears the clash between the Duterte administration and the press has turned personal.

It’s no exaggeration that, after all that has happened by way of killings and assassinations in the past three years of activists, clerics, lawyers and alleged communists, to say nothing of corrupt officials and alleged drug lords going scot-free, the government’s singular attention on Ressa only proved that the persecution of the press remains a clear and present danger.

The whole problem revolves around this administration’s calculated attacks against the press. They raised more questions than answers. Why this journalist? If government is hell-bent on proving her guilty of violating the anti-dummy law, why not let Ressa and Rappler go through due process?

If Duterte is so cocksure of Rappler’s guilt, with clear and undeniable evidence to back the charges up, the least he can do is compel the online news organization to defend its claims in a court of law. A final verdict may or may not give Duterte the leverage he needs, assuming the court will give Ressa a fair and impartial hearing.

As it is, however, government’s moves seem to fall under bombast and swagger, a deliberate yet highly calculated assault to keep the press from exposing more of this administration’s shenanigans. With Ressa out of the way and a general press functioning under duress, government is free to leave society’s questions within the confines of poor and unreliable speculation.

It is, nonetheless, a generally accepted fact that the people are better served by closure than by speculations. Speculations breed only further doubt as to the real intentions of this government.

Closure, on the other hand, brings us from point A to point B. Clarity of purpose is what the people need, not vague, undetermined conclusions.

Take for example the Philippine government’s renewed relationship with the government of the People’s Republic of China. Is China’s support really proof of goodwill on the part of Chinese Pres. Xi Jin Ping or is it something else, entirely?

No one can dispute the fact that it is only proper for the press to raise the question: why is a presumably democratic government like that of the Philippines embracing the “assistance” of a one-party authoritarian state? Is there something we are missing here?

China’s illegal incursions alone within the disputed areas located in the West Philippine Sea should be a matter of highest concern. Be that as it may, Philippine officials seem to have closed their eyes and ears as to consequences to patrimony as well as our overall sovereignty.

Foreign secretary and former publisher and journalist Teddy Boy Locsin has recently echoed much of this administration’s sentiments in favor of China. In a report by the Associated Press, Locsin said, “Without the new China there will be no prospect whatsoever for the developing world to grow into emerging economies.”

According to the aforementioned report, “The secretary’s remarks reflected sentiment in the Cabinet of President Rodrigo Duterte, who has frequently praised China and criticized his country’s long-standing alliance with the U.S.”

While it may be true that the United States have reneged on many of its promises, leaving the Philippines with a lot of misgivings as to this western democracy’s real intentions, the shaping of our relationship with China, what with its illegal incursions, leaves more room for doubts.

The same report hinted on the possible bilateral fissures caused by our newfound friendship with China. “Earlier this month, the Philippine defense secretary said his ‘country’s defense treaty with the U.S. needs to be reexamined, bringing expressions of concern from Washington.’”

Further reports from the Associated Press have already made it clear that such a rift could bring about possible confrontation the likes of which might plunge the world into another serious war.

During its recent ‘freedom of navigation’ operations, Vice Admiral Phillip Sawyer, commander of the U.S. 7th Fleet, told reporters that the United States will not alter its sailings in the disputed South China Sea, regardless of a dangerous maneuver instigated by a Chinese navy ship against the American destroyer USS Decatur near the Spratly Islands.

The more controversial issue of Chinese drugs coming into the country should also be raised. Recently, illegal shabu from China has been seized by anti-drug authorities amounting to tens of billions of pesos.

This begs the question: how were Chinese drug lords able to slip the illegal merchandise past Customs officials?

Even as Duterte makes the claim that the drug situation has escalated after three years of the so-called drug war, the Philippine Drug Enforcement Agency (PDEA) hastens to deny it, saying it is winning the fight. Who, then, should we believe?

And what of loans incurred from China? This is where our problem hits dirt road. The Kaliwa Dam project (to the tune of P12.2 billion over 20 years) and the Chico River Pump Irrigation Project (P4.37 billion over 20 years) not only raise the question as to our country’s ability to pay off the loans, but also the so-called waivers, such as the ‘waiver of immunity’.

For example, Article 8.1 of the loan agreement for the Kaliwa Dam says, “Waiver of immunity: The borrower hereby irrevocably waives any immunity on the grounds of sovereignty or otherwise for itself or its property in connection with any arbitration proceeding…or with the enforcement of any arbitral award pursuant thereto, except any other assets of the borrower located within the territory of the Philippines to the extent that the borrower is prohibited by the laws or public policies having force of law in the Republic of the Philippines, applicable and in effect at the signing date of this agreement from waiving such immunity.”

Such waivers or clauses, which include those under the Chico Irrigation Pump Project, have been criticized for posing threats to sovereign property. One report said, Sri Lanka had to give up its port as payment for loans on the grounds of a similar waiver.

As expected, the Department of Finance was quick to allay fears. Finance undersecretary Mark Dennis Joven said the provisions are mainly ‘standard’: “All our bilateral agreements with China, Japan, Korea, France and with China under previous administrations, all of them have a choice of governing law provisions. And all of these choices of governing law provisions refer to the law of the lender, not the law of the borrower […] Because if we rely on our own law or borrower’s law, then there will be a lot of avenues for us not to pay the loan we owe. And we, as Filipinos, are not like that.”

In other words, should the Philippines fail to pay off its debts, these waivers and clauses amount to our surrendering a portion of what the country owns to the lender.

According to Anders Corr writing for Forbes magazine back in 2017, the new Philippine Debt of $167 billion could swell to $452 billion sooner than we think. Only China will benefit.

“Even at 5%, which is nearest the lending rate of interest published by the IMF and World Bank for the Philippines, the effect of such a large sum would be an increase in debt (in addition to existing debt) of $275 billion after 10 years. That would bring the Philippines’ debt: GDP ratio to approximately 136%. But, at 20%, the maximum interest rate that might occur in a debt-distressed country like Argentina or Venezuela, the debt could balloon to $1.2 trillion in 10 years. That is an unlikely worst-case scenario, but worth calculating as an illustration of the importance of the interest rate” (Anders Corr, “New Philippine Debt of $167 Billion Could Balloon To $452 Billion: China Will Benefit,” Forbes Magazine, 13 May 2017).

In response to speculations on interest rates, Finance Secretary Carlos G. Dominguez III said recently that the terms of the loans secured by government “are at least 30-percent better than the loan secured by the Arroyo administration and wholeheartedly accepted by the [Benigno] Aquino [III] administration.”

Based on the interview by Inquirer.Net, “The Arroyo administration signed the loan agreement for Angat aqueduct in January 2010, while the financing for Kaliwa dam was sealed when Chinese President Xi Jinping visited the Philippines in November last year.

“But Dominguez said the $211.2-million, US dollar-denominated loan for Kaliwa had a lower interest rate of 2 percent per annum, compared with the 3 percent slapped on the $116.6-million borrowing made by Arroyo” (Ben O. de Vera report on Finance Sec. Carlos Dominguez, “Dominguez: China loan for Kaliwa Dam 30% better than Arroyo debt for Angat,” 15 March 2019).

Be this as it may, the question still looms: even with a low 2% interest across a maturity of 20 years, can the Philippines pay off its loans from China?

With 30%—on average and across all political dispensations—of our national budget going to corruption, paying off our loan packages with some ease is highly unlikely. Now that most officials charged with plunder have been released, chances are the figure could go higher.

Questions journalists ask are not proof of hostility; rather, it goes with the job of collating facts, the same facts needed to grasp where we are in the scheme of things and where we are headed.

At 74, Mr. Duterte should know by now that the media’s inquiries are not inquisitions, but opportunities for discussion, and if so granted, chances to form answers and conclusions.

If at all there is ‘destabilization’ being done, government itself should be blamed. Its penchant for secrecy and doublespeak weakens its hold as well as its foundation.

To see to it that there is no misunderstanding between the President’s inaugural vow to preserve and defend the Constitution, execute its laws, do justice to every man, and consecrate himself to the service of the nation, and the press’ job of informing to the best of their ability and training each and every constituent, that is a birthday wish worth having.

Sadly, the wounds are too deep to mend. G