The colors of hope 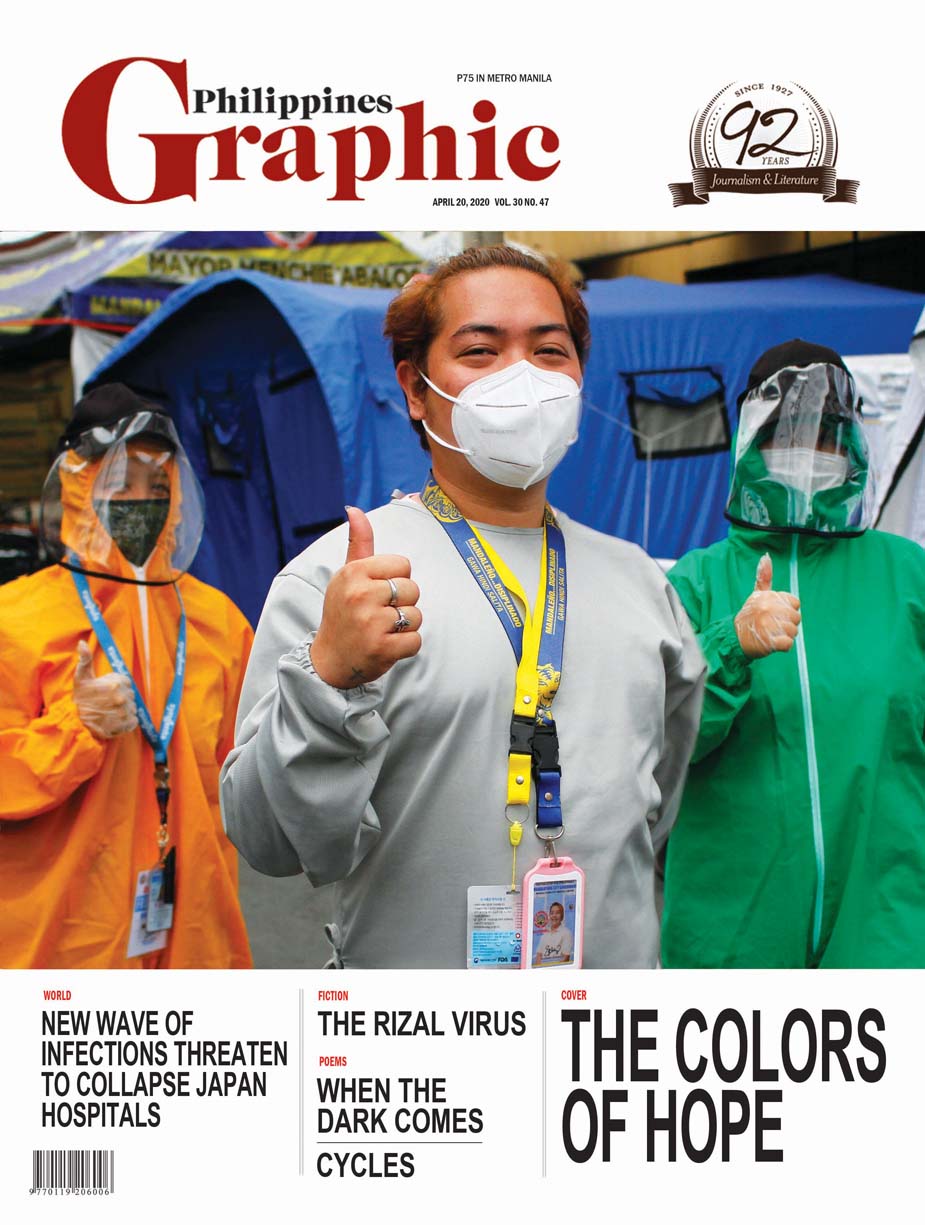 On the morning of Apr. 19, on that cramped space by the porch where I comb the internet daily for news on the COVID-19 pandemic, a document came to my attention.

From the looks of it, the paper was released on Apr. 17 by the Philippine Air Force (PAF). The main instruction or what is here termed as “Command Guidance,” based on Pres. Rodrigo Duterte’s recent “pronouncement of martial law-type role of the AFP/PNP presumably in the Luzon lockdown, sat on the middle in capital letters:

“In connection with the above reference, request/advise all personnel to prepare for strict implementation of extensive enhanced community quarantine where the AFP (Armed Forces of the Philippines) will be the over-all-in-charge along roads and highways.”

The document went on to say that “Further conduct/request briefing from PNP on ROEs, legal and safety measures in dealing with pedestrians and motorists.”

It was signed by LTC Lawrence A. Naldoza PAG (GCS).

Having lived through martial law in the early 1970s, I was struck with the use of the words “martial law” in a military document meant for the “widest dissemination”.

However, it came as no surprise that the PAF officials, to say little of the Philippine National Police (PNP) and the AFP in general, would readily accept the idea that stricter enforcement of the Bayanihan Law would put the country in a better position to deal with the pandemic.

I immediately reached out to one of my sources to confirm the said document. From the looks of it, it has already reached the widest circulation hours before, but only on social media. Naturally, it created a panic.

As a result of my queries, my source forwarded to me a statement by a certain Major Aristides Galang, spokesperson for the PAF.

“The PAF is just anticipating any scenario in case the President, as Commander-in-Chief of the AFP, would decide to implement his recent statements to the public as earlier stated and prepare our troops in advance as normally done by the military organization in the past.”

Maj. Galang seemed to be referring to the words of the President in a recent press conference, stating that if the situation gets any worse because of the people’s stubbornness to follow the rules, he will order the AFP and the PNP—as he has already done so—to be ready.

“So, we are just anticipating and preparing our personnel to be ready.”

I refused to post the said document on social media and comment on it for fear that I have not done the fullness of due diligence in vetting the information.

As is my custom, I leaped to another source and further investigated on the veracity of the document. Apparently, the new spokesperson, Harry Roque, has already released a statement on what the government calls extended or modified enhanced community quarantine, which, according to Roque, could be set in place after Apr. 30.

Whether this statement by Roque expounds on the said PAF document still remains to be seen. To recap, the words in the document told of an “extensive community quarantine,” not the “extended” or “modified” kind.

Several critics, including myself, have raised the largely inaccurate and misleading notion that in order to deal with the pandemic, we will have to think of it as war. War against the virus. War against conspiracy theories. War against “fake” news.

The use of the word “war” in dealing with the current contagion, however, is more an exercise in dysphemism than euphemism. It is fundamentally flawed for the mere reason that it advances a militaristic view of the solution than a medical and scientific one.

Of course, in this report, Roque was quick to dispel any fears that the President is considering a solely martial view of the challenge we are facing.

“For now, the President is basing all his decisions on science and the study regarding the virus. We have to improve our mass testing capabilities in order to know where we are in our war against this disease.”

While I will never discount the substance and value of having order in a time of crisis, an extensively militarized vantage point helps little, if at all, in advancing the more significant role of ethics and ideals during a time of pandemic.

And we see this every single day, these little colors of hope which embolden the public to rise to the occasion.

A militaristic view of the solution will have to come from its principle of the command chain—one person, the highest-ranking brass, making all the decisions and the orders.

A humanistic perspective, however, allows for manifold interpretations of the situation, directly tailor-fitting the immediate needs of several individuals or quarters of the population without downplaying human rights.

Take for example the condition doctors and other medical practitioners and frontliners find themselves in. During the early days of the Luzon-wide lockdown, reports of doctors and nurses being blocked at checkpoints hogged the headlines.

The spokesperson of the Department of Interior and Local Government (DILG), undersecretary Jonathan Malaya, said in a DZMM interview that reports of nurses being forced to walk from the checkpoints to their hospital have reached his office.

Usec. Malaya reminded officers to strictly follow orders coming from the Office of the President and the Inter-Agency Task Force (IATF).

One physician frontliner who goes by the name of Dr. Eugenio was reportedly forced to walk three hours after he was blocked at a PNP checkpoint located on Eastbank Road bordering Cainta and Pasig City.

One doesn’t even have to possess a thorough knowledge of the humanities to grasp what plain common sense would do under the circumstances.

Fortunately, there’s a good deal of running after the learning curve, giving officials a better sense of the situation than previously thought. Problem is, much of the progress came after the damage has been done.

In response to this particular problem, according to a Rappler report, “Cabinet Secretary Karlo Nograles, Science and Technology Secretary Fortunato Dela Peña, Defense Secretary Delfin Lorenzana, Information and Communications Technology Assistant Secretary Manny Caintic, along with DEVCON founder Winston Damarillo introduced what was called the ‘RapidPassPH’ System which will roll out for wide use on Monday, Apr. 6.”

The report further explains: “The system, commissioned by the Department of Science and Technology, aims to remove congestion, speed up deliveries, and protect checkpoint frontliners by lessening personal contact with commuters passing through.

“Dela Peña described the system as a ‘virtual identification system that utilizes QR-code-based technology to provide ease for frontliners and priority vehicles,’ such as those delivering food and medicine. DEVCON, a group of Filipino developers and IT professionals, developed the system for the government for free.”

While a militaristic solution would insist on strict adherence to law and order, enforcing curfews and penalties on all who would dare break quarantine, a more humanistic approach would open doors for the indigent and poorer communities, and craft creative ways to meet their needs while unable to work under enforced quarantine.

During the early stages of the Luzon lockdown, several farmers and food delivery services claimed they were unable to pass through the checkpoints. Some even went out of their way to post their produce online with the hope of selling them in cyberspace.

After netizens quickly pointed out the absurdity of imposing a blockade on food and other daily necessities while under enhanced community quarantine, Agriculture Secretary William D. Dar began easing its rules on food pass issuance.

“During this difficult time, unhampered and unimpeded movement and delivery of agriculture products, food and agri-fishery input products for residents of Metro Manila and nearby communities is our utmost priority,” Dar said. “Now, more than ever, we appreciate and will continue to bank on the commitment and cooperation of our local chief executives as the country’s ‘food security czars’ ready to serve and uphold the welfare of their respective constituents during this trying period, along with other government agencies and agri-fishery stakeholders and partner.”

Apparently, notwithstanding the President’s bent towards an extensive community quarantine, still his whole machinery suffers from dissenting voices from within.

Newly resigned Socioeconomic Planning Secretary Ernesto Pernia himself told CNN Philippines that his resignation was the result of differences in “development philosophy” between him and the members of the President’s Cabinet.

Based on the report, Pernia said he was not a lone voice in calling for the easing of restrictions under the community quarantine.

“‘It is understandable that there would be differences in national development philosophy, given that different people have different educational and disciplinal backgrounds,’ Pernia added. But Pernia admitted such differences in opinions could have been better handled by those in charge of the Cabinet members at this time. ‘So yes, there are indeed difference in approaches and in such a critical time for the country, it is best that the government doesn’t get bogged down internally.’”

How the President would decide, whether he’s in favor or not of extending the quarantine, is still anybody’s guess.

Martial-law levels of enforcement may not be taken lightly by the populace. It could only bog down the government even more in light of abuses which could emanate from the said extensive quarantine.

For some yet unexplained reason, the PNP and the AFP could not deviate from the sort of strict adherence to the letter of the law in order to be humane in their interpretation and implementation of it.

For now, our best bet in dealing with the pandemic is a humanitarian strategy that takes into account all situations regardless of social and economic bearing.

As novelist Albert Camus said, “the only means of fighting a plague is common decency.” G