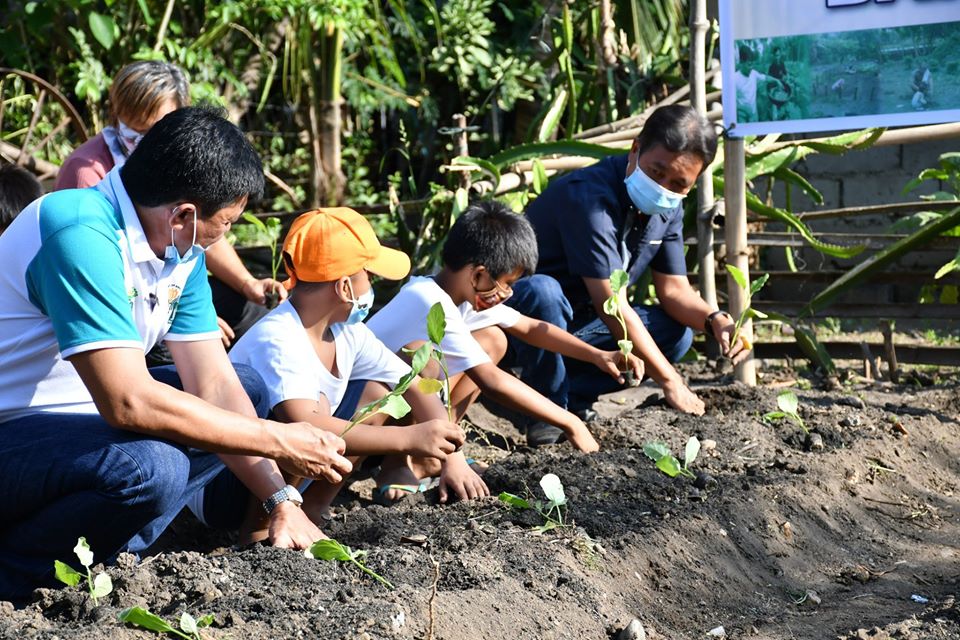 In its bid to widen public acceptance, the Department of Agriculture Regional Field Office No. 02 (DA RFO 02) today joined the Municipal Local Government Unit of Quirino and Youth-Kids tandem through the Quirino Youth in Action (QYA) in the launching of the Plant, Plant, Plant Program (PPPP) or Ahon Lahat, Pagkaing Sapat (ALPAS) Kontra COVID19 in Quirino, Isabela.

As a result, DA-RFO 02 also adopted Barangay Sto. Domingo as another recipient of the program’s adopt-a-barangay scheme.

“The program is now gaining momentum in Cagayan Valley,” said Regional Executive Director Narciso A. Edillo in his message.

“I thank the group of the youth, officials and residents of Barangay Sto. Domingo and Quirino for accepting this program which aims to ensure food security in our localities. Since we cannot implement this alone, we are soliciting the continued support of the municipal government for its sustainability.”

He challenged every Quirinian to be productive and start their backyard gardening, native chicken raising and other small livelihoods.

“We will provide the technical and material inputs as you begin producing food right in your own backyards and save money for your household needs,” he added.

“What makes this activity different from the earlier launchings is the support of the whole community especially household members like the mothers, the youth and the kids who took the lead,” she said.

“There are about 300 youth and kids that are benefitted in this project. It is a good indication that the young generation is now slowly being engaged in agriculture.”

Aquino revealed that aside from assorted vegetable seeds and seedlings, DA-RFO 02, through the Cagayan Valley Research Center (CVRC) and Regional Crop Protection Center (RCPC) in the City of Ilagan, also distributed seeds, seedlings and native chicken to the households and to be reared by kids for egg production and easier income.

“This is an add-on item in the package because we believe that integrating livestock in our backyards means ready food and additional earnings for the family.”

Meanwhile, Quirino Mayor Edward Juan expressed his gratitude for considering the municipality as recipient of the project.

“Sa ngalan ng aking mga kababayan, ako ay nagpapasalamat sa DA sa isa na namang mahalagang programa na inyong ibinigay sa aming munting bayan [In behalf of my constituents, I would like to thank the DA for this very important program that it has bequeathed to our town]” he said.

The local chief executive also announced the possible financial assistance to be given to QYA for a sustained planting program in the barangay.

“Makakaasa po kayo na amin po itong aalagaan at pagyamanin [You can rest assured that we will nurture this program],” Acob said.

“Hindi lang po ang mga magulang ang inyong natulungan kundi ang mga kabataan at mga anak. Sisikapin naming palaguin ang aming nasimulang garden at padadamihin ang mga manok na inyong ibinigay [You not only helped the parents, but you have also helped the children. We will do our best to enhance and enrich this starter garden and increase the number of the chickens you have given] .”

Instrumental in the success of the activity is the strong involvement of the QYA which is expected to take the lead role in the maintenance of the communal garden.

According to Johnly Cacho, founder and president of QYA, the youth were challenged to initiate planting vegetables and mushrooms when the Enhanced Community Quarantined (ECQ) started through the “Project Agbiag.”

Cacho revealed the idea that youth members of QYA had adopted kids in the area that also influenced their parents and other household members to do backyard gardening, hence the massive and simultaneous planting involving more than 200 households during the launching.

Other activities undertaken include the planting of vegetables in household backyards and streets, lectures on backyard, container gardening and poultry raising.