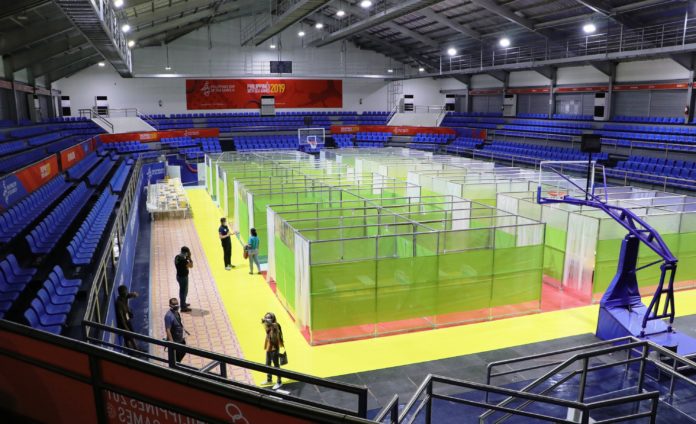 SUBIC BAY FREEPORT— The Subic Bay Metropolitan Authority (SBMA) has offered its community isolation facility at the Subic gymnasium for the care and isolation of workers at the Subic container terminal who had tested positive of the new coronavirus disease (COVID-19).

SBMA Chairman and Administrator Wilma T. Eisma said she sounded this off in a meeting on Aug. 20 with officials of the Department of Health (DOH), the World Health Organization (WHO), and the Subic Bay International Terminal Corporation (SBITC) to defuse the health crisis at the Subic container port where the latest tally placed 29 workers have tested positive for COVID-19.

Eisma said the major concerns raised in the meeting included the home quarantine of COVID-positive workers who are either asymptomatic or have only mild symptoms, and the tracing of contacts in the community where workers live.

“In this situation where we have a rising number of COVID-19 cases among workers in one area at the Freeport, it would be best to quarantine the infected workers in a proper isolation facility, rather than send them home to self-quarantine,” Eisma pointed out.

“This is a situation that could blow bigger, but by isolating those who tested positive, we can help arrest local transmission. Otherwise, the contagion would spread and may get out of hand. We don’t want that to happen,” she added.

The COVID-19 outbreak at the SBITC container terminal was detected last week when a total of 15 cases were initially recorded after a worker from Olongapo City, who had no history of travel to any high-risk area, first manifested symptoms of the disease on July 30.

Over the weekend, the SBMA ordered SBITC to have all its employees tested through reverse transcription polymerase chain reaction (RT-PCR) in order to prevent a total shutdown of operations.

SBITC president Roberto Locsin agreed and gave his assurance that all other personnel in the terminal will undergo RT-PCR test. These included a total of 238 shift workers, port users, security personnel, canteen staff, and even SBMA checkers.

However, as results of the mass testing on Monday began coming in, 14 new cases were confirmed as of Wednesday from about 80% of the total number of tests taken, resulting to a running count of 29.

“If more COVID-19 cases are discovered among SBITC workers, and if local medical facilities can no longer accommodate them, then we offer the Subic gym community isolation facility,” Eisma said.

“We have started preparing the Subic gym as early as April for just this kind of scenario—but always with the prayer that it won’t come to this, and here we are now. It’s sad, but at least there’s a place where the afflicted can go and get medical care without posing risk to their families,” she added.

The Subic gym, which has just been refurbished last year as venue for the Southeast Asian Games, has been converted by the SBMA into a 32-bed care and isolation facility complete with work and rest quarters for medical care personnel.

Eisma said the SBITC may use the facility at its own expense, as the DOH has not yet designated any level-2 hospital in the community to manage it as a COVID-19 facility.

Aside from the Subic gym, the SBMA also transformed the six-storey Leciel Hotel building into an additional care and isolation facility with 81 rooms. This, however, is still awaiting DOH accreditation.