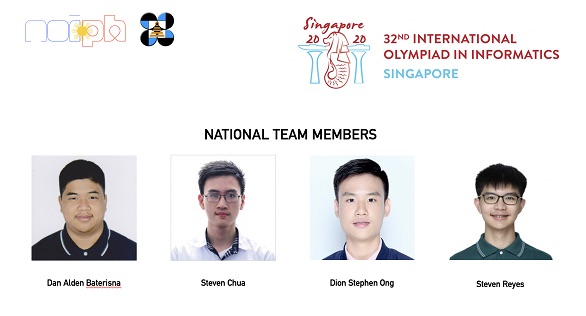 Joining them are Steven Reyes of Saint Jude Catholic School and Dion Stephan Ong of the Ateneo de Manila Senior High School, which coincidentally placed 3rd and 4th, respectively, in the national competition. Reyes and Ong, however, earned their keeps after the training camp.

Now on its 32nd run, the IOI is the most prestigious informatics competition in the world, and will be done fully online this year. The contest was originally set in July in Singapore and was moved to Sept. 21-22.

The Department of Science and Technology–Science Education Institute (DOST-SEI), which supports the country’s participation in the IOI, lauded NOI.PH for leading the charge in finding the best bets to represent each Filipino into the world stage.

“We congratulate our national team members as well as NOI.PH for building the most competitive lineup possible. We hope that our contingents can not only put up a great fight but also inspire other students to pursue informatics and analytics,” DOST-SEI Director, Dr. Josette Biyo remarked.