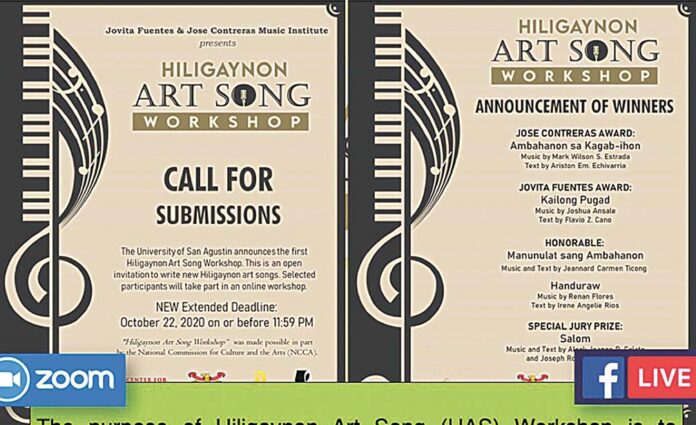 The Hiligaynon song delivered a smooth, flowing and gentle rhythm. Accompanied by a piano, the song’s beauty could be felt even if the listener is Manila-based or non-Hiligaynon, who may not understand the lyrics.

The song, “Ambahanon sa Kagab–ihon,” was one of the winners in the recently held “Hiligaynon Art Song Workshop,” a project of the Center for Heritage and Indigenous Cultures (CHIC), one of the four research centers of the University of San Agustin in Iloilo City.

The video of the song was shown to the media during an online news conference held by the university’s Office of Research and Global Relations (ORGR), where CHIC belongs.

Besides the song writing workshop, a research on Ati poetry is also being undertaken by the CHIC.

These projects are the initiatives of the University of San Agustin to help preserve and promote the indigenous songs, poems and languages of the indigenous people that are slowly dying.

It also “aims to promote Hiligaynon as a language that lends itself naturally to music, as well as to serve as an impetus to contribute to the growing Hiligaynon song literature,” Acevedo said in his slide presentation during the online event.

“We would like to have more and hear more Hiligaynon songs on the radio,” he said.

In this regard, the workshop wants to attract more students, faculty and experts on Filipino heritage, culture, and on the indigenous people of Iloilo.

Acevedo said the Jovita Fuentes and Jose Contreras Music Institute, a program of CHIC office, implements the workshop. It is in partnership with the university’s Conservatory of Music.

WHAT IS ART SONG?

An art song is a vocal music composition, usually written for one voice with piano accompaniment, the online event said in its briefer.

It is often a musical setting of an independent poem or text, intended for the concert repertory as part of a recital or other occasion.

It is said that art song is the marriage of music and words. The art song has become a specific genre in many countries, such as Germany, France, England and others.

The most popular Filipino art song is the “Kundiman,” of the late 19th and early 20th centuries, the briefer said.

Among the Hiligaynon folk songs of the art song genre are “Ay Kalisud” and “Walay Angay.”

However, the effort to compose Hiligaynon art songs in a deliberate sense is a less popular idea among Filipino composers.

Acevedo related how the five–day workshops were held.

The 2019 workshop brought to Manila music artists from US and China, including a Grammy award winner.

The 2020 workshop—with a call for submissions deadline on October 22, 2020—was held mostly online owing to the COVID–19 pandemic.

The entries were submitted online through Zoom and Facebook live meetings.

It yielded 10 composers, who produced 12 songs that made it to the shortlist. Five songs were adjudged winners.

Then they had breakout sessions to discuss their songs with a resource person. After which, the participants were sent out for a few days to edit their songs.

After the resource composer e–mailed the feedback, the participants edited their songs for the final submission. Recording their musical pieces followed.

The project ended last January 10, with a presentation of songs that were recorded.

Asked where the Hiligaynon songs are now, Acevedo said, “in general, they are scattered but they are growing” because of events like the Bombo Music Fest.

He said the workshop he is leading and the national agencies have been proactive in engaging non–Manila artists to come up with proposals.

“The NCCA (National Commission of Culture and the Arts) has been encouraging us to do our own research. One of my professors in UP (University of the Philippines) said: ‘Stay there, discover your songs, discover your artists and composers.’ That is exactly what I’m trying to do,” he said.

Despite the Hiligaynon songs being scattered, Acevedo said he is “very optimistic.”

“There is a pop group that records and performs songs in Hiligaynon. It is very promising. I see this among Cebuanos, they play Cebuano songs on the radio. I would like to see that in the Hiligaynon community,” Acevedo said.

The project was funded by the NCAA, in partnership with university’s ORGR.

The research on the poetry of the Ati indigenous people on Panay Island is being led by John Paul J. Petrola, a research faculty at CHIC and a member of the National Research Council of the Philippines (NRCP) Division of Social Science.

The project, “Binalaybay sang Ati: Mga Istorya sang Kabuhi sa Tunga sang Kalamidad kag COVID–19 [Ati Poetry: Life Stories Amid Calamities and COVID–19],” is a one–and–a–half–year initiative that started in January and will end in June of this year.

“The aim [of the study] is to document Ati indigenous knowledge, practices, lived–experiences during natural calamities and their responses to the impacts of COVID–19 outbreak in their communities through Hiligaynon poetry, known as binalaybay,” Petrola said.

He added that the overall goal of the study and engagements with the Ati people “is to help improve their socio–economic well–being, their health condition, and the recognition of their cultural identities and way of life.”

Petrola explained later to the Philippines Graphic that economic benefits to the Atis will come later, not directly during the study, as a result of the policies that will be recommended by the research outcome to the local government units (LGUs) on Panay Island, composed of Iloilo City and the provinces of Aklan, Antique, Capiz, Iloilo, and Guimaras.

“Hopefully, we will consider how to include the indigenous people’s rights and the needs of the Atis in their policies, such as in delivery of basic services, livelihood and education,” he said.

Petrola further said in his presentation that despite the Ati people being historical figures of Panay, the country’s economic boom still left them marginalized and vulnerable to environmental and disaster risks brought by climate change and the COVID–19 pandemic.

“This project hopes to become an avenue in giving the Ati people the due recognition as full–fledged members of the society and the opportunity as significant contributors in nation building,” he said.

He explained that the project will account the life stories authored by the Ati people, as poems written in their native languages are products of their indigenous knowledge that depict their cultural identities and indigenous phenomenology.

“This is descriptive because through their writings we were able to describe the social condition of Ati people. Literary because instead of having it in paragraph form, they will be making their own poems. Analytical because their poems will be analyzed and will be turned into a paper to be published in refereed journals. Phenomenological because they will discuss their experiences during the calamities and COVID–19. Also, as a method, we will be having ethnography, interviews and focused group discussion, while observing the health protocols,” he added.

Petrola explained that the research on Hiligaynon poetry, or binalaybay, was selected because “it represents the rich culture of Hiligaynon.”

“It is a form of expression of our feelings, our emotions, even our pains, even our struggles in life,” he said.

This is the reason for coming up with a new approach in documenting the indigenous knowledge and practices, he added.

“It is to both help uplift the socio–economic status of our Ati brothers and sisters, and to contribute in the preservation and protection of binalaybay in Panay,” he said.

It includes the literary analyses of the collected binalaybay and on Ati people’s indigenous knowledge and practices.

Petrola said they will provide the Department of Education copies of the books, “and tap it as part of the project later on. We are doing this because we understand that the Ati language is already dying.”

The analysis, findings and results of the study will be submitted to the LGUs.

A position paper will also be submitted to the LGUs in order to advise local executives in crafting policies that may have direct benefits to Ati people, especially on women and children.

Petrola said the Atis will be coauthors and the community will be visible in the book.

He added that the research would ensure the participation of Ati women in the process and in writeshops.

It will also include the Ati’s rights in the formulation of local policies, and the recognition of indigenous knowledge and practices that contribute to sustainable development and proper environmental management.

It will also recommend the protection and preservation of Ati indigenous knowledge, practices and language, he said.

The project is sponsored by the Department of Science and Techology (DOST)–NRCP.

The DOST sees the importance of science the link between and art.

Secretary Fortunato T. de la Peña earlier said science and technology play a role in preserving and enhancing our culture. “The future generations should know about it, should have a chance to be part of it.”

De la Peña noted that one of the items in President Duterte’s 10 Point Agenda is “Promoting Science, Technology and the Creative Arts” in order to enhance innovations for inclusive development.

He said the DOST currently has a program on science and the creative arts. The Department added art in its science, technology, engineering and mathematics program, making the acronym STEAM.

Its Social Science Division does “researches on indigenous technology and knowledge…and cultural tourism.”

The University of San Agustin is building a strong research capability. Since 2017 it has created four research centers. Besides CHIC, the three others are the Center for Informatics, Center for Chemical Biology and Biotechnology, and the Center for Natural Drug Discovery and Development.

According to Dr. Jonel P. Saludes, associate vice president and director of Research and Global Relations of the university, CHIC’s vision is to serve as an excellent resource in the preservation and enrichment of Filipino cultural, heritage, and indigenous identity and Augustinian heritage and legacy through quality research, community engagement, and awareness programs.

To realize this vision, the NCCA and the DOST–NRCP awarded research grants to CHICH Director Acevedo, who is an international concert pianist and music pedagogy expert.  Both institutions also awarded a research grant to Assistant Professor of Philosophy Petrola.

Saludes, a long–term Balik Scientist, said that the university has three roles: provide instruction, render extension services to the community that it serves, and conduct research.

The creation of the four research centers was seen as a “dramatic transformation in the research competence of the university,” which is “unprecedented during the 100 years of its existence,” Saludes pointed out.

He added that in partnership with the government and private agencies, the University of San Agustin is doing research not for publication alone, but to cascade the products of researches to the community that they serve.

“We do this with lofty goals in mind. That it should benefit the Filipino people,” he said.

Lyn Resurreccion
Lyn B. Resurreccion has been a journalist for more than three decades, more than two decades of which was as a science journalist. She has received several awards and recognitions, which include: the Face of Biotechnology Award in 2016; various Jose G. Burgos Jr. Awards for Biotech Journalism, including the Hall of Fame; DOST-SEI Recognition on its 30th Anniversary on Sept. 29, 2017; recognized in the "Science and She" campaign of ISAAA and Searca; Asean Champion of Biodiversity Award from the Asean Centre for Biodiversity for putting up and editing BusinessMirror's Biodiversity page; won for the BusinessMirror the Bantog Media Award for Institutional Category for editing its Science page; Best Journalist, Individual/Professional Category for Print Media from DOST Media Awards in July 2005; Third Prize in Science and Technology Award from the Philippine Press Institute-Philippine Geothermal Inc., March 2001; and Model Senate Employee in 1994.

Comeback to the future!