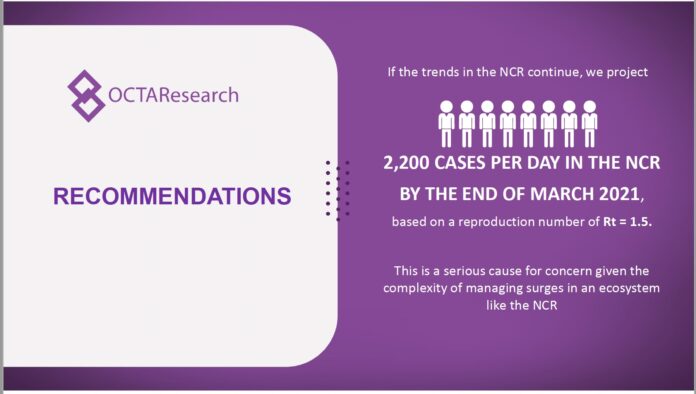 The number of COVID-19 cases in Metro Manila could rise by 45,000 by the end of March to 280,000 cases from the current number of 234,754 because of the rapid spread of the UK B117 COVID variant, with the number of fatalities rising by about 990 cases unless everyone especially the national and local governments and health authorities work together in ensuring the spread of the disease is curbed, according to the OCTA Research team.

OCTA Research’s fellows recommended that health care workers inoculate themselves with any vaccine available to boost their immunity from the COVID-19 virus, especially with the discovery of the South African B.1.351 variant in Pasay City the other day and the rising number of the UK B.117 variant in certain cities in Metro Manila, including Pasay and Makati.

In an online press conference staged for OCTA Research by BluePrint.PH, Dr. Nicanor Austriaco, OP—a molecular biologist from the Providence College in Providence, Rhode Islands, USA and a visiting professor in the University of Sto. Tomas—said there is still the possibility of containing the spread of the so-called “super-COVID variants.” These are the South African B.1.351, in particular.

Austiaco said that preventing the spread of the super variants is possible if the Pasay LGU will undertake quick steps, along with the city’s residents, to contain the infection.

In its Mar. 1 report, OCTA Research declared that the surge in cases of COVID 19 is now inevitable and that the only steps the government and the public could take is to reduce the potential number of cases by ensuring the containment of the disease through vaccination and practice of the minimum health protocols.

“Under the current trend, the number of new Covid-19 cases per day will increase from its current average daily value of 770 to 2,200 by the end of March, unless the spread of the virus is curbed,” said the group in its latest report released on Mar. 1.

In an online press conference staged by BluePrint.PH, OCTA Research chief data analyst Dr. Guido David of the University of the Philippines said Pasay City and the City of Makati are experiencing the highest rate of increase from within Metro Manila.

Dr. Ranjit Rye, an OCTA Research fellow, said the LGUs in the NCR and the national government must prepare for the inevitable increase in the number of COVID cases because of the fast spread of the new easily-transmittable COVID variant by (a) further increasing the capacity of the local health care system (human resources, equipment, and bed capacity) in preparation for potential outbreaks in the NCR; (b) further increase testing to cope with the expected surge in cases; (c) further scale-up contact tracing efforts and ensure that a robust and effective contact tracing app for active case finding is utilized all over the NCR; (d) continue building more isolation facilities in the NCR, improve hospital capacities where they are limited and improve the system for coordination and sharing of medical and isolation facilities all over the region.

OCTA Research is an independent and inter-disciplinary research group composed primarily of University of the Philippines faculty members and alumni and  contributors from the University of Santo Tomas and Providence College, USA.

It said the increase in cases in certain LGUs in Metro Manila and in other places like in the Cordilleras, particularly in Baguio City, La Trinidad and Tabuk, Kalinga, “are largely cases of community transmission exacerbated by the possible spread of a new and more contagious variant apart from the rise in mobility within and among provinces (likely due to poor/lax border controls, sparse testing, and leaky quarantines) because of the opening-up and the expansion of economic activity in the NCR and all around the country.”

OCTA also blamed the rising COVID cases in those areas in the NCR to the “deteriorating compliance with the minimum health standard by some citizens due to pandemic fatigue and/or the failure of LGUs to monitor and enforce GCQ regulations have also contributed to spikes, especially in metropolitan areas.”

“In Pasay, Makati, Malabon and Navotas, the daily attack rate had exceeded 7 per 100,000, which classifies these LGUs as high risk areas according to DOH guidelines,” the group said.

It stressed that based on those  data and projections, “we believe that the period of negative growth rates in cases observed in the National Capital Regions (NCR) in the past few weeks has now ended.”

“This trend has been reversed, with significant positive growth in new cases observed in some LGUs in the region. In this light, based on our analysis of the data and the past trends in NCR, we believe that a surge in its early stages has already started in some LGUs,” OCTA stated.

However, it should be noted that this potentially serious surge in the NCR is still in its early stages and can still be mitigated.

It said the inevitable rapid increase in COVID cases could still be managed with the “implementation of appropriate and timely responses to reverse this increasing trend quickly and to prevent this ensuing surge from becoming full-blown and potentially overwhelming the health care system in the NCR.”

“High-risk local government units (LGUs) in the NCR, Cebu City, Lapu Lapu, and other regions identified in this report to further intensify their efforts at testing, tracing, and isolation as well as to implement small, targeted lockdowns to contain super-spreader events and reverse the increase in transmissions in their communities,” OCTA stated.

It noted that in the identified NCR LGUs, the implementation of more aggressive and effective localized lockdowns with stricter border controls are urgently needed to suppress further viral transmissions. “Effective and stricter border controls must be observed to mitigate Covid-19 transmissions from the NCR and between provinces and prevent the spread of the virus,” OCTA said.

It said LGUs and the national government must “strictly monitor and enforce compliance with minimum health standards, such as physical distancing, wearing of face mask and face shields and proper hygiene, and to discourage large gatherings to reverse the increase in transmissions at the community level.”