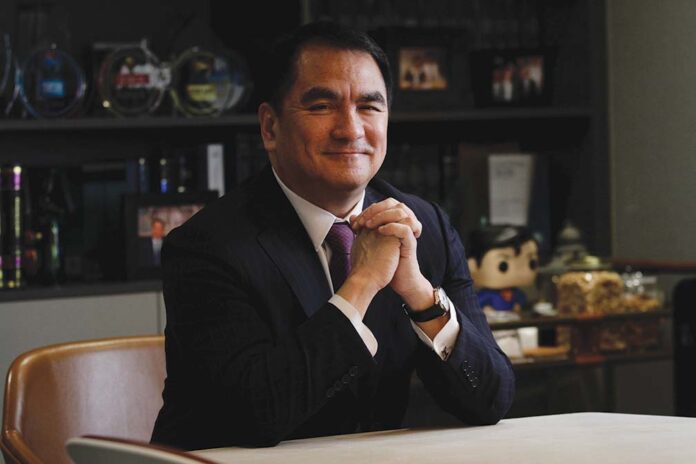 Three years after putting up his law firm, Atty. Nilo Divina accepted his alma mater’s offer to be the Dean of the UST Faculty of Civil Law in 2009. It was a move that would later change the landscape of law studies in the university.

Before accepting the deanship position, Divina said the best students of pre–law courses in UST would usually pack their bags to continue their law studies in schools that were considered to be the best in the country.

This was also the reason why most of the bar topnotchers would come from these schools, thus, creating the perception that they were, indeed, the best law schools in the country.

But since he assumed as UST’s Dean of the Faculty of Civil Law, Divina said he has managed to produce the most number of topnotchers: six in 10 years, to be specific.

In 2018, UST recorded the highest passing percentage in history, with 97% and the only Metro Manila law school that produced a topnotcher in the 2019 Bar exams.

“My objective is to be in the list of the top 3 law schools. Often, we ranked between 4th and 7th but recently, in certain years, we managed to belong to the top three. The goal of course is to make it in that list consistently. Be that as it may, based on recent bar performances coupled with statistics, we are one among the consistent top law schools in the country. We have become a law school of choice,” the Dean stressed.

How did he manage to break the exodus of aspiring top lawyers from UST to other law schools?

Divina said he offered, from his own pocket, scholarship, tuition subsidy, housing allowance, and book subsidy to the best students of UST.

He would ask the Deans of UST–AB and Commerce to provide him the names of the best students so he could offer them scholarships when they enter UST law school.

Divina said his being a dean and a legal practitioner has somehow complemented each other.

His deanship, according to Divina, enhances his stock as a legal practitioner.

“So what I’m trying to say is, ‘my counsel, my lawyer is a Dean of one of the best law schools in the country,’ so that gives you confidence right, and also enhances my stock as an authority in commercial law,” he explained.

Likewise, being a Dean also keeps him updated on recent jurisprudence aside from having the chance to see the best law students in UST and UP, where he both teaches.

On the other hand, being one of the most profitable law firms in the country, Divina said he was able to provide scholarship to his top students without having to ask money from UST.

“I can finance my dreams, I can fund my dreams for the school because I have the money generated by the operation of the firm,” he noted.

Considering that the best law students now come to UST, it has created a perception that it is one of the best law schools in the country.

But while God has showered him with so much blessings, Divina said he was also given many challenges along the way such as the disbarment cases filed by Patricia Bautista, estranged wife of former Commission on Elections (Comelec) chairman Andres Bautista and by the Senate over the   Horatio Castillo fatal hazing of UST law freshman Horacio “Atio” Castillo III in 2018.

Patricia accused Divina of paying commissions to her husband for helping his clients with the Comelec.

These commissions, according to Patricia, formed part of her husband’s alleged unexplained wealth.

Divina denied that his law firm has clients who had transactions with the Comelec during Bautista’s term.

In Castillo’s case, Divina and 20 other members of his fraternity Aegis Juris were accused of covering–up Castillo’s death during initiation rites.

The Department of Justice (DOJ) found probable cause to file violation of the Anti–Hazing Law against 10 members of the Aegis Juris fraternity in 2018.

However, the DOJ found no criminal culpabilities against Divina, who is one of the prominent members of the fraternity.

In 2016, Divina got caught in a difficult situation after his fraternity got involved in a brawl with members of the Gamma Delta Epsilon l in front of Manila Hotel during the Bar exams on Nov. 13.

Divina admitted that many have predicted the collapse of the law firm following these controversies, particularly after the Bautista controversy.

Fortunately, none of its clients abandoned the firm while new clients continued to arrive even after the controversies.

The law firm managed to bounce back and continue its climb to the top.

And how did he hurdle all these controversies? By having a clear conscience.

“As long as you have a clear conscience, nothing should bother you. I just thought of winning the case so everybody will be silent.  If I won the case, it means I didn’t do anything wrong,” he  stressed.

Having the right perspective by not harboring hatred or bearing rancor is very important in facing challenges, according to the Dean.

“You try to see things from a supernatural perspective, you don’t lose your peace and of course you also have to be focused.  So, these are the problems. How do I solve them other than to pray about them,” Divina pointed out.

Joel San Juan
A BusinessMirror reporter with a degree in Journalism from the University of Santo Tomas (UST). He has been working as a reporter for more than 20 years.

Celebrating the Yuletide and Rizal in Biñan Sesquicentennial