A basketful of literary food 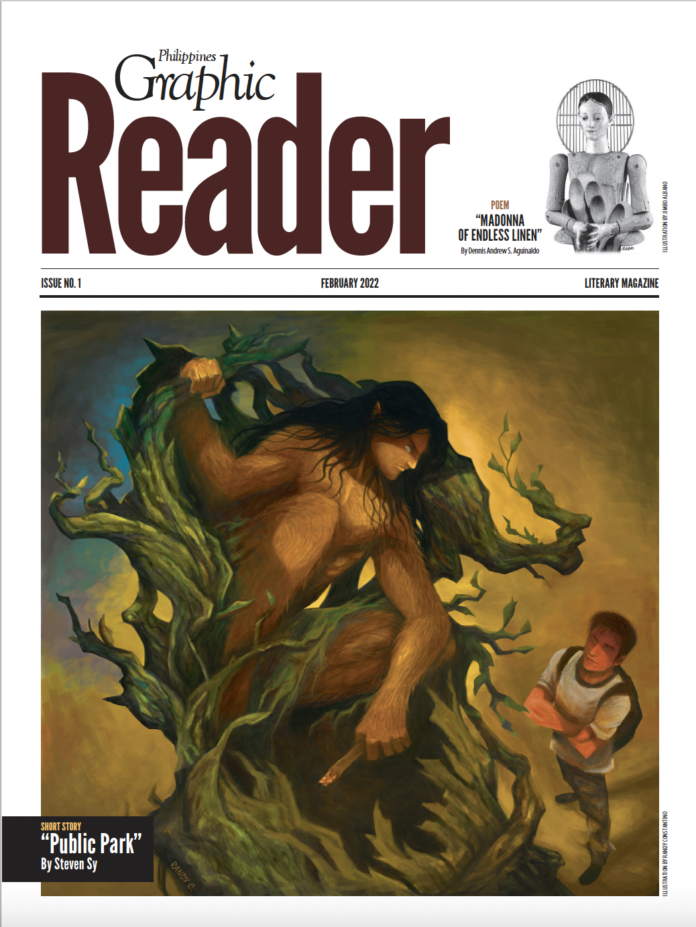 A long season of drought gripped us and passed by. Before and after the war, local newspapers and magazines carried literary sections, although sometimes irregularly. Martial law clamped down most print and broadcast media, and only the government controlled saw light. Then, little by little, literary sections reappeared like in Panorama magazine, Philippines Free Press, Philippines Graphic and Focus. Poems and short stories and literary essays were published, some subjected to subtle censorship.

The debut issue features a short story “Public Park” by Steven Sy, a fantasy fiction. It deals with kapres and evil forces, and carries hope for an ecological balance.

Another fiction, “The darkest light—a Christmas Tale,” by Maria Therese Nicole Tinio Marbella is a light but touching tale about a character entering a Christmas-lantern contest.

And the fourth fiction, “That male thing” by Diana B. Noche, takes a look at marital relationship and how wife and husband stay together in the face of a seemingly unclear crisis.

Marra PL. Lanot
Marra PL. Lanot is a poet, essayist, and freelance journalist. She has published articles and columns in newspapers and magazines on the arts, culture, and politics. She also translates poems from English and Filipino into Spanish, just as her own poems have been translated and published abroad into foreign languages such as Spanish, Chinese, Korean, Dutch, and Japanese. Marra was an official delegate to several international literary festivals here and abroad. She spoke and read her works at the Kuala Lumpur World Poetry Reading; the first International Feminist Book Fair in Melbourne; and the first Hong Kong International Literary Festival; IV Encuentro Internacional de Poetas Mujeres in Oaxaca, among others. At the V Encuentro de Poetas del Mundo Latino, held in Mexico, Marra was the only delegate from Asia. At the 23rd Festival Internacional de Poesía de Medellín, Marra was the sole delegate from the Philippines. She also received a four-month grant to the International Writing Program in Iowa. Among her literary awards are the Palanca award for poetry in English, and another for her essay in English. Furthermore, she received the Catholic Mass Media Award for her columns in Filipino as well as the Balagtas award for a poem in Filipino. Her works include: Cadena de Amor: New and Selected Poems in English, Filipino, and Spanish. Quezon City: University of the Philippines Press, 2017. Dream Sketches, second edition. Manila: University of Santo Tomas Publishing House, 2013. Darna & Other Idols. Mandaluyong City: Anvil Publishing, Inc., 2012. Riding the Full Moon and Other Poems in Filipino and Spanish. Pasig City: Anvil Publishing, Inc., 2008. Witch’s Dance at iba pang tula sa Filipino at Español. Pasig City: Anvil Publishing Inc., 2000. The Trouble with Nick & Other Profiles. Quezon City: University of the Philippines Press, 1999. Deja vu & Other Essays. Quezon City: University of the Philippines Press, 1999. Dream Sketches. Metro Manila: Anvil Publishing, Inc., 1991. Passion & Compassion. Quezon City: New Day Publishers, 1981 (first printing), 1988 (second printing). Flowers of the Sun. Quezon City: Mayon Volcano Publishing House, 1970. Sheaves of Things Burning. Quezon City: Panitikan Publications, 1967.

Bulul in the Midst of Change