First Spanish Performer in Manila in the New Normal 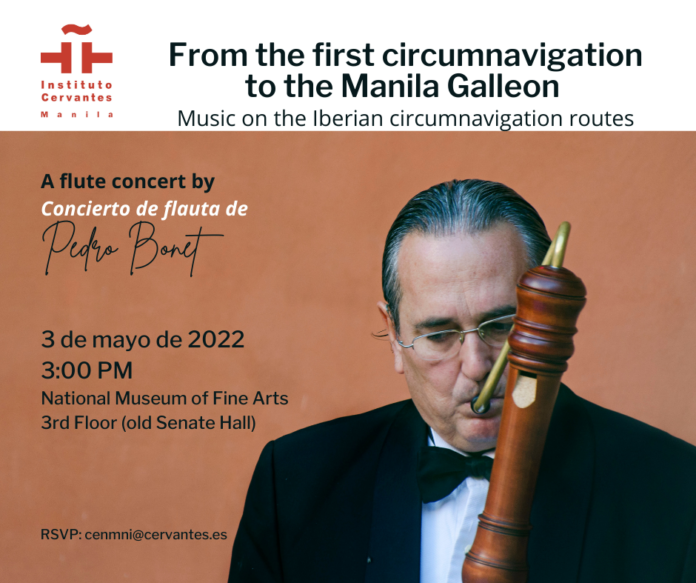 For the first time in two years, Instituto Cervantes, the cultural arm of the Embassy of Spain, will hold a concert on Tuesday, May 3 at 3 p.m., at the National Museum of Fine Arts (3rd Floor, old Senate Hall) in Manila.

This is the first concert of the Instituto in this period of the “new normal.” Pedro Bonet is the first Spanish performer who comes all the way from Spain to the Philippines after the pandemic started.

A music professor specializing in the recorder flute, Bonet is a founding member and director of the baroque music ensemble “La Folía,” one of the veteran groups internationally recognized in the field of historical performance.

He has held concerts in more than 40 countries on five continents, and recorded CDs such as Baroque Madrid, Instrumental Music in the Age of Velázquez, and La Nao de China (Music from the Spanish trade route to the Far East), among others.

Prior to the concert there will be a guided tour to the exhibit “The Longest Journey: The First Journey Around the World.”

Also organized in the framework of the First Circumnavigation by the Embassy of Spain and the National Museum, the exhibit highlights the entire route of the voyage, through a display of objects and artifacts, along with priceless documents preserved at the Archivo General de Indias in Seville, Spain, and other important archives, libraries and museums.

The concert is organized by Instituto Cervantes de Manila with the collaboration of the Embassy of Spain in the Philippines and the National Museum of the Philippines. Admission is FREE but prior registration is required by sending an email to cenmni@cervantes.es. For more information, please visit our Facebook page at www.facebook.com/InstitutoCervantesManila. You may also contact us at 8526-1482.