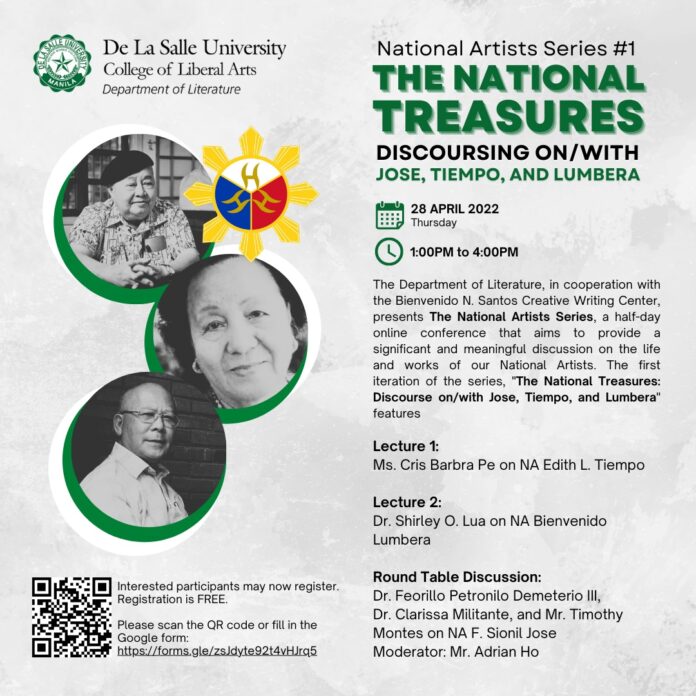 The Department of Literature, in cooperation with the Bienvenido N. Santos Creative Writing Center, presents The National Artists Series as a part of its activities for the celebration of the National Literature Month.

This is a half-day online conference via Zoom that aims to provide a significant and meaningful discussion on the life and works of our National Artists. Each discussion dwells on any particular work/s by a National Artist or any topic/s related to their ouvre.

Cris Barbra Pe teaches with the Department of Literature at De La Salle University. She is writing a biographical project on Edith L. Tiempo for her dissertation.

Dr. Shirley O. Lua is an associate professor of literature at De La Salle University (DLSU). She sits on the board of the Manila Critics Circle, which hands out the National Book Awards annually to the best books published in the Philippines; and the Manunuri ng Pelikulang Pilipino, the film critics group that confers the annual Gawad Urian on the best Philippine movies. She wrote the texts in 44 Cineastas Filipinos, a coffee-table book on Filipino filmmakers. She was the associate editor of Direk: Essays on Filipino Filmmakers (DLSU Publishing House and Sussex Academic Press, 2018). She is former director of DLSU Bienvenido N. Santos Creative Writing Center (2011-2017).

Dr. Feorillo A. Demeterio III is a full professor at the Department of Filipino, Kolehiyo ng Malayang Sining, and Director at the University Research Coordination Office, De La Salle University. He is the author of the book, Ang mga Ideolohiyang Politikal ng Catholic Bishop’s Conference of the Philippines (2012), Ferdinand Blumentritt and the Philippines (2013), and The Socio-Political Discourses of the Catholic Bishops’ Conference of the Philippines (2018), as well as other essays about Hermeneutic studies, cultural studies, Philippine studies, and Filipino philosophy that have been published in local and international journals. He is the co-author of the following books: From Exceptionality to Exceptional: Inclusion of Differently Abled Persons in the Workplace (2014), and Cataloging and Baselining the Filipino-Spanish Churches of the Diocese of Maasin, on the Island of Leyte (2020). He has served as a visiting research professor, Council for Research in Values and Philosophy, Catholic University of America, Washington, DC, in 2013, and the Divinity School of Chung Chi College, Chinese University of Hong Kong in 2021. In  2014 , Dr. Demeterio was recognized as an outstanding alumnus in the field of Philosophy, Graduate School of the University of Santo Tomas. He is a co-founder of the Andrew Gonzalez Philippine Citation Index.

Clarissa V. Militante is the author of two novels, Different Countries (Anvil, 2010) and We Who Cannot Be Daughters (UST Publishing House, 2014); her third novel, State of Happiness, is soon to be published by UP Press under the UP-Institute of Creative Writing’s Philippine Writers Series. Different Countries was long-listed in the 2009 Man Asia Literary Prize and a finalist in the 2010 UP Madrigal Gonzalez Best First Book Award. Her short story “Dream of the Ruins,” written under a grant from the BNS Creative Writing Center, was recently published in UP LIkhaan’s DX Machina 4th issue. Another short story, “Cecilia’s Kind of Love,” was included in Anthology Short Stories I published by the Sydney School of Arts & the Humanities in 2018. She currently teaches Literature and Creative Writing courses in De La Salle University where she also finished her PhD in Literature.

Timothy R. Montes grew up in Borongan, Eastern Samar.  He came under the tutelage of Edilberto and Edith Tiempo during the late 1980s and early 1990s when he enrolled in the Creative Writing program of Silliman University from which he obtained his master’s degree in 1993. The Black Men, his collection of short stories, was published by Anvil in 1994; he also co-edited (with Cesar Ruiz Aquino) Tribute, a memorial anthology of stories in honor of his teacher Edilberto K. Tiempo. Tim has been a recipient of national literary awards like the Palanca, Graphic, Free Press, and the Writers Prize from the National Commission for Culture & the Arts. He started his teaching career in Silliman  during the 1990s before moving on to join the faculty of the creative writing program of UP Mindanao (Davao City) during the 2000s. He is currently teaching  in De La Salle University, Taft Avenue, Manila.