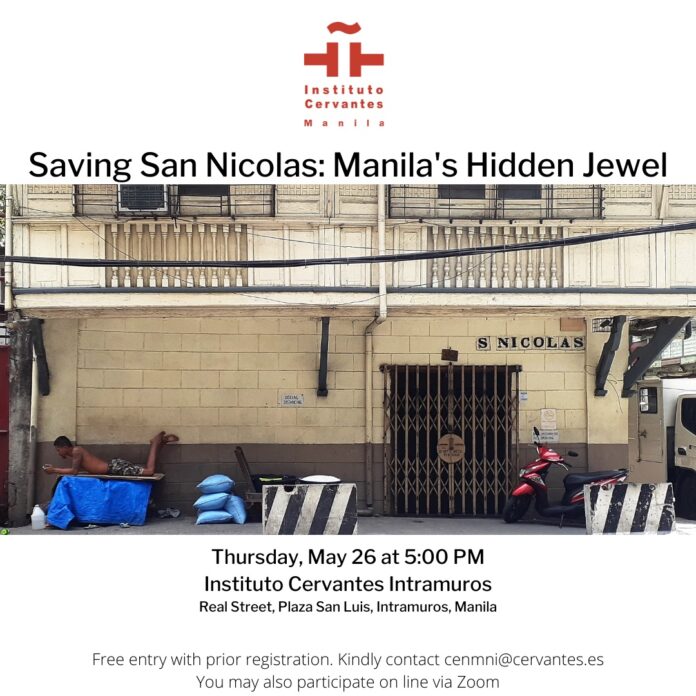 The district of San Nicolas has great historical value. The interaction of Spanish and
Chinese influences that largely contributed to the Filipino identity took place in
Chinatown, which San Nicolas is part of. Here you can find buildings from the 19th century, some dating about 150 years ago.

These are the last vestiges of a previous era, of which not many people know about. Unfortunately though, not much value has been placed on this area which resulted in the loss of its heritage value.

As a first step towards raising awareness about the historical and heritage value of
San Nicolas, Instituto Cervantes de Manila, is organizing a round table discussion
for historians, architects, urban planners, businessmen, residents of the area and
the general public to reflect on the value of the San Nicolas district, explore its
potential as an historical site, and brainstorm for ideas on how to conserve it.

The event will follow a hybrid format in which people can view the discussion and participate online, via Zoom. The link is https://us06web.zoom.us/j/86201518785.

Admission is FREE but if you will be attending in Intramuros, prior registration is
required by sending an email to cenmni@cervantes.es. For more information,
please visit our website at http://manila.cervantes.es or our Facebook page at
www.facebook.com/InstitutoCervantesManila. You may also contact us at 8526-
1482.