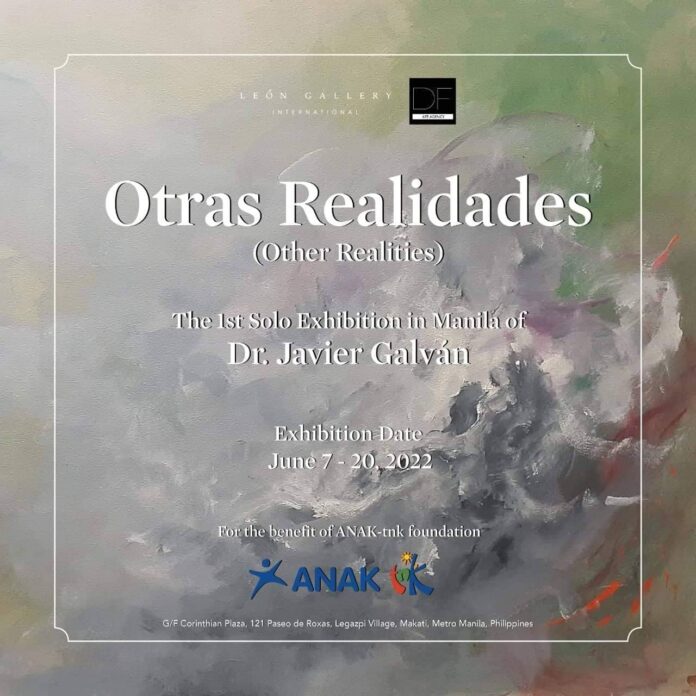 Evocatively billed as Otras Realidades (Other Realities), the exhibit consists of photographs and paintings. Its theme adverts not to the literal, visible, physical world, but rather to another realm, a region, a terrain, that is more sensed than perceived.
In art, this space is accessed through the idiom of abstraction, which is propelled by the elements of line, color, shape, form, and their arresting configuration, evoking illusion of motion, and, ultimately, order in disorder. This other reality exists only in the viewer’s sensate experience.

Galvan’s photographs are pure illusion of another reality, otherworldly, immaterial, sometimes ethereal and lyrical, but despite the ambiguity of the image, all are all solid definition. In works that allude to specific places—like Cibeles, and Hogueras en St. Pierre —the eye can distinguish the avenue of evening lights in a European city and the illumination suggested by a blazing bonfire.

The Lucernario Oranes photographs have the reflecting power of russet orange and calming turquoise, bathed in shadows and light. The work is based on the principle of claro-obscuro, or the more familiar term chiaroscuro, the strong contrast between dark and light. This is stressed more obviously in Basa Visaya where the energies of dark and light—where you barely notice the shift—are held in perfect balance, tension, and harmony.

In the images of watery surfaces—as in Azul y Blanco Sobre Fondo Azul and Shall We Dance?—the viewer is drawn towards the gradient shades of light on a slick city pavement or a shimmering placid river. Traces of physical reality reflected on the surface remain as mere visual echoes, mirages that alter our preconceptions of identifiable concrete, material edifices or flesh-and-blood human beings. Galvan responds to these surprising sights, his abstracting eye ever alert, always on the qui vive.

Tiananmen—which alludes to the open square in the center of Beijing, China, where a tragic massacre of student activists occurred in 1989 – is now, in the photographic eye of Galvan, the visible image of a motorcycle driver careening past the square. Now totally unrelated to the painful memory of its past, the work is available to the mind as a where the energies of dark and light are held at once in tension photographic motion of displacement, taken by a camera fixated on the phenomenon of the present.

Through photography, Javier Galvan is in touch with the poetry of infinite possibilities, the challenge of creating other realities.

Artists, through the millennia, no matter the degree of their genius, have done either of two things: resist influence or open themselves up to it, by turns embracing the thrill of latent discoveries, or risk being completely overwhelmed by it. Matisse, the great French Fauvist, declared that this is the true test of a daring artist.

Galvan’s cloud paintings are strongly influenced by his friend Betsy Westendorp, who has now returned to her homeland Spain after a residency in the Philippines for more than half a century, having married the Filipino-Spanish Antonio Brias.

Due to her advanced age and delicate health—she is turning 94 this December–the daughters of Westendorp, Carmen and Sylvia, have made the difficult, but necessary decision, to bring their mother back home to Spain, where they have a country house in Aravaca, just outside central Madrid.

During Galvan’s term at the Instituto Cervantes, Westendorp donated to the center a large painting of clouds—what she called atmosferografias—which the artist painted as a lament and a memorial piece for her eldest daughter Isabel, who died in Madrid while Westendorp was in Manila.

In behalf of the Instituto Cervantes, Galvan accepted the cloud painting titled Passage. With this gesture of generosity, a bequest to a specific place that symbolizes the presence of Spain, Westendorp has fused her work with the spirit of her distant daughter in their Motherland.

On a rare occurrence, indeed an exceptional decision, Westendorp agreed to do a collaborative work with Galvan. This in itself was incontrovertible proof of her own affection for her countryman. The resulting work is the appropriately titled Joy of Life. In a magnanimity of artistic spirit, the elder artist allowed the younger Galvan to leave his own personal mark on their aesthetic journey.

Other cloud works of Galvan, such as Coral-Rooted Clouds and the enigmatic Et Erunt signa…(There will be signs…) are emissions of modulated chromatic tones, conveyed through roiling forms and spatial projections, etched against a vast celestial sky.

In both his photographs and paintings, Señor Javier Galvan is galvanized and affected by his encounters with reality—and from this, he creates other realities, capturing their seeming incongruities as he surveys the world around him. It is the artist’s abstracting eye that sees the potential varieties of his own self-expression.

Cid Reyes
Cid Reyes has been regarded as the author of choice of five National Artists, namely, Arturo Luz, BenCab (with Krip Yuson), J. Elizalde Navarro, Napoleon V. Abueva, and Fernando Amorsolo. He received a Best in Art Criticism award from the Art Association of the Philippines (AAP).