Only When It Rains 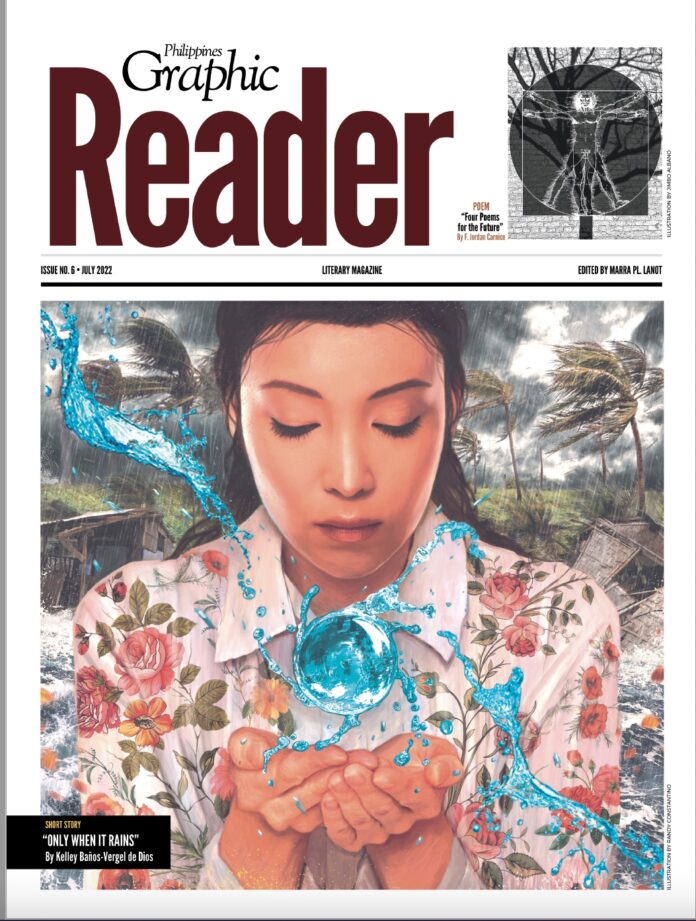 Pluviophile. She had to look that word up because she wanted to know if there was a term to describe people like her.

People who love the rain, according to Google. People who find joy and peace of mind in rainy days.

She didn’t know how it started. Maybe it had something to do with her name.

She learned from her aunts that it was a choice between “Alizeh” which is Persian for wind, “Aella” which was Latin for the Greek word for whirlwind, and a slew of others that either meant sky, rain, wind or mist… all of which had to do with the weather.

Her mother must have had a hard time selecting a name that fit her because she had already gone all the way to letter T before she settled on Talia which supposedly means ‘rain from heaven’ – in Hebrew.

People in general didn’t like the rain, she would learn as a child. Someone even made a nursery rhyme to get children to hate it (“rain, rain, go away…”) But flowers loved the rain. And frogs. And ducks.

And thanks to someone called Dr. Seuss (who wasn’t a real doctor at all, she heard said) and a little train-wreck of a story called The Cat in the Hat, children suddenly perked up and started looking forward to rainy days and the chance of a surprise visit from a cat in a red-and-white hat and red bowtie, to entertain them. with mayhem.

The lucky ones who got leave to be outdoors and play in the rain, jumped into puddles, raced paper boats in them or stood beneath a rain gutter and imagined it a waterfall.

She remembered being allowed to play in the rain at least once when she was about seven, but when she caught a cold and later ran a fever—that was the end of it.

But she never lost her love for the rain. She was a heavy cloud, cold-weather girl all the way to her twenties.

There was something very soothing about the way it drummed on a roof or hit a pavement.

And she loved the smell of petrichor afterwards because it told her that the things that needed the rain to grow and shoot forth green sprouts from the earth, were getting it.

Rains are also succeeded by the happy cacophony of bullfrogs which to her sounded like a lot of bus horns going off at the same time, when she first heard it.

And if it’s still light outside after a rain shower, one might even see a rainbow or a double. Talk about silver linings!

When she met the man she decided was “the one,” it was a June day—the start of the rainy season.

The man who—when he walked her home on rainy nights—never bothered with an umbrella because throwing his jacket over her head meant he had an excuse to hug her close to share it.

The date was June 3 when she found roses from him on her typewriter, and throughout the six years they were engaged—he made sure she didn’t skip any meals on heavy workdays by running across the street (yes, even in the rain) to get her something from her favorite restaurant.

But the rose-tinted glasses came off when her mother fell ill and she was summoned to her bedside.

Apparently, there was more to her being named after the rain than what the aunts and her mom had let on while she was growing up.

She wasn’t just named Talia because it was raining when she was born.Her mother told her she was descended from a long line of weather-benders who trace their roots to Aniton Tauo who could psychically control air, wind, water, lightning, thunder, and mist. Now that her mother was dying, this ability needed to be passed down to her as has been done from generations of mothers and daughters with the rare gift. Talia didn’t want to accept her mom’s genetic inheritance or whatever she and the aunts called it.

She didn’t want the responsibility of redirecting storms, preventing drought or bending a potentially destructive wind. It was too big a task!

Her aunts told her someone was coming to instruct her in the old ways of bending the elements and tried to ignite her spirit of public service by impressing on her that nothing was more noble than preventing damaging weather from occurring, for the common good.

“Think of it like a superpower you just gained,” they said. “Only no one would know you are the superhero that averted disaster, except you. That way, people are kept safe, and you get to keep your anonymity.”

“You are asking too much!” she had thrown up her hands at the titas. “I never asked for any of this, it’s so unfair to just dump this on me right now.”

Seconds from launching the frustrated tirade, she turned on her heel and walked out, refusing to set foot in the house again until she got the call days later, informing her that her mother had passed away.

While going through the business of arranging her mother’s wake and funeral, Talia worried that it would rain on her interment when the memorial-park people asked if she would be requiring a tent and some chairs at the site.

That’s when it happened, when she felt something shift in the atmosphere.

Did I do that? she asked herself. I couldn’t have—I said no to mom, didn’t I?!

She stood there arguing with herself while the skies and oceans worked out the configurations that would bring fine weather when the weather bureau clearly forecast scattered rain showers.

She had only thought of it and they had quickly scrambled to do her bidding. No need for cloud-seeding or any sort of geoengineering here, just sheer mad skills!

The aunts smiled knowingly among themselves. Little did Talia know that when her mom touched her face to explain atmokinesis to her on her deathbed, she was actually already passing on the ability to her daughter as her own mother had done to her during her time.

When it finally dawned on Talia how her mother had finagled the transferal, she smiled ruefully and went up to where she was laid out like a queen, to whisper conspiratorially:

“I have to hand it to you, Mom, you really got me this time.. Well, I hope you know what you’re doing.”

(and crossing herself, thought: “me, too” already worrying how her plan of “clear skies ahead” when PAGASA forecasts rain and thunderstorms, will impact on the weather bureau)

Turning to the hovering aunts, she yielded: “Okay, titas—go fetch your ‘Mr. Miyagi’ – I’m ready to learn my ‘kata’ now.”

After they went off twittering like birds, she walked out to the patio and gazed up to the heavens in resignation.

“You up there—elements of air, fire, and water—” she yelled at the dark sky then scrunched her face to wink hugely, “get ready to rock!”

Facebook
Twitter
Pinterest
WhatsApp
Previous articleWebinar reveals crucial links between craft and forests
Next articlePELÍCULA Spanish Film Festival will celebrate its 21st edition by returning to the big screens in Manila, and extending to Malaysia and Australia

Kelly Baños-Vergel de Dios
Kelly Baños-Vergel de Dios is a 60-year-old freelance creative writer. A Bachelor of Arts (Mass Communication) graduate of Ateneo de Zamboanga University, she has accumulated 37 years’ experience in media (TV, radio print, and online) in various capacities as manager, editor, and content producer in both English and Filipino. She writes short stories and poetry as a hobby.

FROM SEAWARD AND OTHER POEMS