The Philippines Graphic on the wings of history 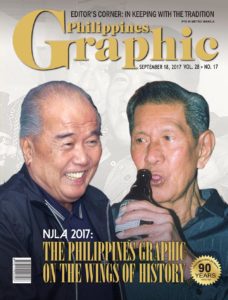 Over time, the images fade; the pages turning brown with age. Pile after pile of magazines gather dust in a narrow stockroom, its load of news and features forgotten.

In the world of the internet, old newspapers and magazines make a beeline to oblivion. Unless people choose to remember, take the time to unearth the past, and be awed in the truth that the past can turn up again in the present and the future.

The Philippines Graphic—the oldest, surviving weekly, English magazine of national circulation—puts a premium on its history and its power to define the present and the future.

It has 90 years of experience, having gone through three owners, starting with the “grand old man of Philippine popular publishing” and “Komiks King” of the Philippines Ramon Roces (1927) to industrialist J. Antonio Araneta (1970s), all the way to the late media mogul-businessman Ambassador Antonio L. Cabangon Chua and his family (1990 to the present).

After being in hiatus during the years of Martial Law, the Graphic made a comeback with National Artist Nick Joaquin as its first editor-in-chief.

It was a Graphic that devoted ample pages to short fiction and poetry and published the works of poet Marra Lanot, fictionists T. D. Agcaoili and Andres Cristobal Cruz, to name a few. The Graphic commitment to publish literature stemmed from a covenant between Nick Joaquin and media mogul Antonio L. Cabangon Chua.

Every year, since 1990, the Philippines Graphic Literary Awards recognized the top three short stories that graced its pages. 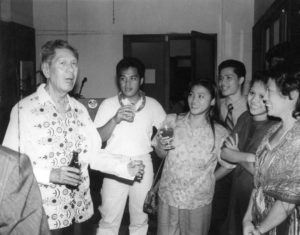 On June 18, 1990, the revived Graphic came out with its first issue. Its cover: Egai Fernandez’s painting Kahapon, Ngayon at Pangarap [Yesterday, Today, and Dreams]. The cover, as described by its editors, “illustrates the past and present threats to national sovereignty, and the people’s hopes for tomorrow. Kahapon, Ngayon, at Pangarap also epitomizes our hopes for this magazine whose maiden issue you hold in your hands; we are born in a time of turmoil, but the future gives us no cause for despair.”

“A time for turmoil” best described the first year of the Graphic as it lent its pages to stories of the US military bases, the Mindanao conflict, the 1990 Luzon earthquake, “The Marcosian Flashbacks” penned by the master Nick Joaquin, and a host of other issues.

The Graphic is living proof that the social problems we have at present is rooted in the past. 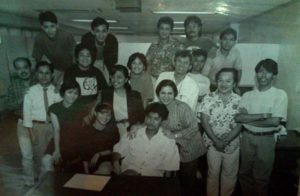 Some 26 years before President Rodrigo Duterte unfurled the War on Drugs, the Philippines Graphic, in August 1990, already carried a story on the Drug War and the Martial Law Syndrome, written by Graphic managing editor Cesar Carpio:

…The police forces face “serious problems of discipline” in enforcing the anti-drug law.

Their martial law syndrome is still with them. They make shortcuts and adopt military methods, while the police function is civilian in nature.”

The principal author of the Dangerous Drugs Law of 1972 (Republic Act 6425), Natividad says “we cannot wait for the police forces to cleanse themselves” in fighting the drug menace. He points out that criminals engaged in the drug trade, being members of syndicates, have “money, influence, and power.” But they should be stopped because of the sufferings they cause among the innocent, and because their illegal activities sap the moral strength and destroy the social fabric of society.”

Plaques and cash prizes: First Place (P50,000); Second Place (P30,000); and Third Place (P20,000)— will be given to the top three short stories contributed in the Graphic’s Literary Section. A material prize will also be awarded to the chosen “Poet of the Year.” 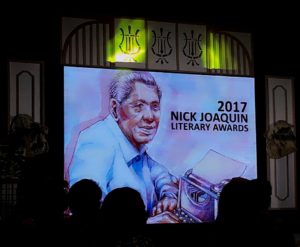 The evening will have a cultural presentation of Joaquin’s life and times in the Graphic as depicted in choice photographs and favorite songs of the National Artist to be rendered by singer Madonna Decena and the La Voce Chorale, and produced by the events company, Actualizer Worldwide Group.

Decena was a semi-finalist on the reality-talent search Britain’s Got Talent in 2008. During her audition, she received a standing ovation from the audience and wowed judges including British producer Simon Cowell, television presenter Amanda Holden, and journalist Piers Morgan. This year, the singer won six medals at the World Championship of Performing Arts held in Longbeach, California. Decena was also the female vocalist of Manny Pacquiao’s official back-up band Nu Groovz for his local and international concerts.

“Time with Nick,” will see fellow writers, former Graphic staff, and long-time friends of Joaquin share their memories of the late National Artist.

The award will be presented by the Graphic and the Aliw Media Group—mother company of Philippines Graphic, BusinessMirror, Pilipino Mirror, DWIZ, and CNN Philippines

A Patron of the Year Award will be presented to Pru Life UK, a leading insurance company in the Philippines. Pru Life UK and the Philippines Graphic have been partners in supporting Philippine literature through the Graphic’s literary section and the NJLA.