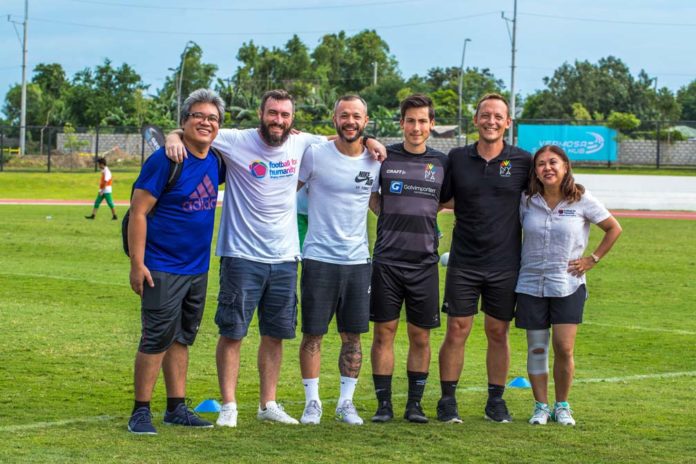 In line with FIFA President Gianni Infantino’s recent visit to Manila in support of the country’s football development, one of the main topics touched was infrastructure, something that Football for Humanity (FFH) Foundation has been staunchly pouring out efforts onto for at least the past three years.

In one report, the FIFA president mentioned that with their organization’s help, having more infrastructure for the sport, and more competitions at varying levels, will benefit the Philippines’ overall improvement in football.

Such a statement from the most powerful man in world football only further validates the objectives of Football for Humanity in creating football infrastructures that the community can freely use particularly for the children in order to plant the seeds and eventually cultivate a footballing culture and develop the fundamental individual skills, in an organic setup, in playing the sport.

Football for Humanity co-founder and vice-president Belle Tiongco believes the visit of FIFA’s highest executive is a positive impact for Philippine football.

“It’s very inspiring, FIFA coming here. Just that… the visit of the (federation’s) officials is already very inspiring because that means that the interest in football (in the Philippines) is really growing.”

“I think the president of FIFA coming to the Philippines is a huge boost and an inspiration to football across the country. And with the statements that he made when it comes to the infrastructure, this is something which plays a key role in the development of football in the Philippines on a community level as well.”

One of Football for Humanity’s main thrusts in contributing to community development lies in the creation of football fields or pitches for small-sided variant of the beautiful game, particularly five-a-side.

At its very essence, the driver of such infrastructure development initiatives emanate from the belief that sport and play is a fundamental right for every child. The creation of such specific football pitch facilities enable play-based learning environments for children to have a shot at fulfilling their potentials in the sport.

“For now, we (lack) infrastructure. We’ve gone around the country for the past four or five years on our football advocacy and that’s one glaring (deficiency). That’s why when we formed our strategy, we were very clear: Football infrastructure should be promoted (and) built,” Belle Tiongco shared.

After being involved in six completed projects, three in Bicol and three in Mindanao, in partnership with local government units (LGU) FFH has been building simple, cost-effective concrete pitches for small-sided football.

The facility being built do not feature touchlines, making children enjoy free-flowing, fast-paced games that cultivate individual skills that will help them set up the innate qualities that would serve as their foundation towards the next level of their development. Furthermore, it is considered the most popular format in England where millions of young people play on a weekly basis.

Another important aspect in the building of these facilities is that they are made exclusively for football and, to a certain extent, futsal as well deviating from the more applied norm of sharing facilities with other sports like basketball and volleyball courts as emphasized by Belle Tiongco.

“In our actual experience, (sharing spaces with other sports) because once kids get (more immersed) to football then there’s going to be that clash (with practitioners of other sports) in terms of who will play (in the facility).

“You don’t want one sport to suffer because you are promoting another.”

Going back to the statements made by FIFA President Gianni Infantino on the infrastructure development and the recent urging of Filipino worldwide boxing icon and Senator Manny Pacquiao (whom President Infantino paid a visit to) on the need to focus on sports disciplines where Filipinos can excel and win, gives encouragement in terms of the direction that FFH’s initiatives are taking as Chris Thomas further intimated.

“I think the comments that were made by the president of FIFA, they just affirm what we’ve been doing since 2016 and what we are striving to do, not just from a community level, but on a national level as well.

“Especially with the likes of (Congresswoman) Pia Cayetano (whom President Infantino also met, being an advocate of women’s sports) and (Senator) Manny Pacquiao talking about legislation and policies—which are really important—they are part and parcel of the growth of the sport by having the right policies and legislations in place so that it opens the doors for government’s support whether through financial or infrastructure.

“Things look like they’re coming together in harmony with the PFF, FIFA, and the legislators, and with the current projects that are on the ground particularly with what we at FFH are doing, everything seems to be matching together.”

Football for Humanity Foundation may be currently focusing their immediate future efforts on infrastructure and community development initiatives, but they are also in the midst of other activities related to football.

At the moment, FFH, in partnership with Dubai World Expo 2020 and One World Play Project, are still in the midst of spreading awareness and hope through football in the country by distributing specially made balls that are virtually indestructible to far flung and conflict-torn areas.

Also, in-line is the Vision Beyond Borders project which is a coaching course to be provided by National Youth Association of Sweden and UEFA B licensed English FA tutor Owen Southgate which will begin early November in Vermosa Cavite.

Vision Beyond Borders will be held in multiple locations around the country beginning in Luzon, followed by the Visayas, which will then conclude in Davao in Mindanao.

Football for Humanity’s advocacy does not focus on the sport of football as an end to their means, though. FFH aims to provide a holistic approach in community development through the “Play for Goals” program by partnering with other not-for-profit groups such as Library Renewal Partnership and Waves for Water which builds libraries and provides clean water facilities respectively.

FFH’s latest project in Davao actually has been the product of the collaboration with their aforementioned partners along with the help of the LGU and is the template that the foundation really is striving for in terms of helping the community.

“Football for Humanity is not just about the infrastructure, and the promotion and development of the sport. It’s about social development and community empowerment by taking that holistic approach in a sustainable way.

“We’re also tackling pressing issues in society whether it be drugs, crimes gang recruitments even violent extremism. It’s another way for us to use football to prevent these type of things from happening… even health issues.

“Football becomes that platform and tool to direct the community’s youth to a more successful future,” shared Chris Thomas.