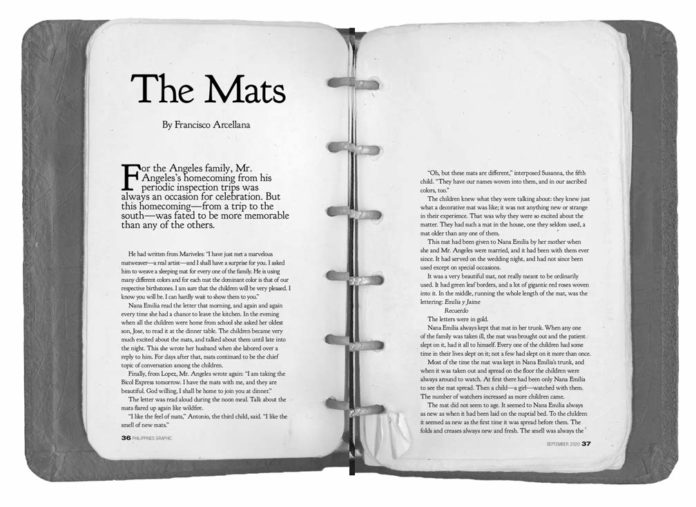 For the Angeles family, Mr. Angeles’s homecoming from his periodic inspection trips was always an occasion for celebration. But this homecoming—from a trip to the south—was fated to be more memorable than any of the others.

He had written from Mariveles: “I have just met a marvelous matweaver—a real artist—and I shall have a surprise for you. I asked him to weave a sleeping mat for every one of the family. He is using many different colors and for each mat the dominant color is that of our respective birthstones. I am sure that the children will be very pleased. I know you will be. I can hardly wait to show them to you.”

Nana Emilia read the letter that morning, and again and again every time she had a chance to leave the kitchen. In the evening when all the children were home from school she asked her oldest son, Jose, to read it at the dinner table. The children became very much excited about the mats, and talked about them until late into the night. This she wrote her husband when she labored over a reply to him. For days after that, mats continued to be the chief topic of conversation among the children.

Finally, from Lopez, Mr. Angeles wrote again: “I am taking the Bicol Express tomorrow. I have the mats with me, and they are beautiful. God willing, I shall be home to join you at dinner.”

The letter was read aloud during the noon meal. Talk about the mats flared up again like wildfire.

“I like the feel of mats,” Antonio, the third child, said. “I like the smell of new mats.”

“Oh, but these mats are different,” interposed Susanna, the fifth child. “They have our names woven into them, and in our ascribed colors, too.”

The children knew what they were talking about: they knew just what a decorative mat was like; it was not anything new or strange in their experience. That was why they were so excited about the matter. They had such a mat in the house, one they seldom used, a mat older than any one of them.

This mat had been given to Nana Emilia by her mother when she and Mr. Angeles were married, and it had been with them ever since. It had served on the wedding night, and had not since been used except on special occasions.

It was a very beautiful mat, not really meant to be ordinarily used. It had green leaf borders, and a lot of gigantic red roses woven into it. In the middle, running the whole length of the mat, was the lettering: Emilia y Jaime

The letters were in gold.

Nana Emilia always kept that mat in her trunk. When any one of the family was taken ill, the mat was brought out and the patient slept on it, had it all to himself. Every one of the children had some time in their lives slept on it; not a few had slept on it more than once.

Most of the time the mat was kept in Nana Emilia’s trunk, and when it was taken out and spread on the floor the children were always around to watch. At first there had been only Nana Emilia to see the mat spread. Then a child—a girl—watched with them. The number of watchers increased as more children came.

The mat did not seem to age. It seemed to Nana Emilia always as new as when it had been laid on the nuptial bed. To the children it seemed as new as the first time it was spread before them. The folds and creases always new and fresh. The smell was always the smell of a new mat. Watching the intricate design was an endless joy. The children’s pleasure at the golden letters even before they could work out the meaning was boundless. Somehow they were always pleasantly shocked by the sight of the mat: so delicate and so consummate the artistry of its weave.

Now, taking out that mat to spread had become a kind of ritual. The process had become associated with illness in the family. Illness, even serious illness, had not been infrequent. There had been deaths…

In the evening Mr. Angeles was with his family. He had brought the usual things home with him. There was a lot of fruit, as always (his itinerary carried him through the fruit-growing provinces): pineapples, lanzones, chicos, atis, santol, sandia, guyabano, avocado, according to the season. He had also brought home a jar of preserved sweets from Lopez.

Putting away the fruits, sampling them, was as usual accomplished with animation and lively talk. Dinner was a long affair. Mr. Angeles was full of stories about his trip but would interrupt his tales with: “I could not sleep nights thinking of the young ones. They should never be allowed to play in the streets. And you older ones should not stay out too late at night.”

Finally, after a long time over his cigar, Mr. Angeles rose from his seat at the head of the table and crossed the room to the corner where his luggage had been piled. From the heap he disengaged a ponderous bundle.

Taking it under one arm, he walked to the middle of the room where the light was brightest. He dropped the bundle and, bending over and balancing himself on his toes, he strained at the cord that bound it. It was strong, it would not break, it would not give way. He tried working at the knots. His fingers were clumsy, they had begun shaking.

He raised his head, breathing heavily, to ask for the scissors. Alfonso, his youngest boy, was to one side of him with scissors ready.

Nana Emilia and her eldest girl who had long returned from the kitchen were watching the proceedings quietly.

One swift movement with the scissors, snip! and the bundle was loose.

Turning to Nana Emilia, Mr. Angeles joyfully cried: “These are the mats, Miling.” Mr. Angeles picked up the topmost mat in the bundle.

Nana Emilia stepped forward to the light, wiping her still moist hands against the folds of her skirt, and with a strange young shyness received the mat. The children watched the spectacle silently and then broke into delighted, though a little self-conscious, laughter. Nana Emilia unfolded the mat without a word. It was a beautiful mat: to her mind, even more beautiful than the one she received from her mother on her wedding. There was a name in the very center of it: Emilia. The letters were large, done in green. Flowers—cadena-de-amor—were woven in and out among the letters. The border was a long winding twig of cadena-de-amor.

The children stood about the spreading mat. The air was punctuated by their breathless exclamations of delight.

“And this, I know, is my own,” said Mr. Angeles of the next mat in the bundle. The mat was rather simply decorated, the design almost austere, and the only colors used were purple and gold. The letters of the name, Jaime, were in purple.

“And this, for you, Marcelina.”

Marcelina was the oldest child. She had always thought her name too long; it had been one of her worries with regard to the mat. “How on earth are they going to weave all of the letters of my name into my mat?” she had asked of almost everyone in the family. Now it delighted her to see her whole name spelled out on the mat, even if the letters were a little small. Besides, there was a device above her name which pleased Marcelina very much. It was in the form of a lyre, finely done in three colors. Marcelina was a student of music and was quite a proficient pianist.

José was the second child. He was a medical student already in the third year of medical school. Over his name the symbol of Aesculapius was woven into the mat.

“You are not to use this mat until the year of your internship,” Mr. Angeles was saying.

‘This is yours, Antonio.’

‘And this is yours, Jesus.’

Mat after mat was unfolded. On each of the children’s mats there was somehow an appropriate device.

At least all the children had been shown their individual mats. The air was filled with their excited talk, and through it all Mr. Angeles was saying over and over again in his deep voice:

“You are not to use these mats until you go to the university.”

Then Nana Emilia noticed bewilderingly that there were some more mats remaining to be unfolded.

“But Jaime,” Nana Emilia said, wonderingly, with evident trepidation. “there are some more mats.”

Only Mr. Angeles seemed to have heard Nana Emilia’s words. He suddenly stopped talking, as if he had been jerked away from a pleasant phantasy. A puzzled, reminiscent look came into his eyes, superseding the deep and quiet delight that had been briefly there, and when he spoke his voice was different.

“Yes, Emilia,” said Mr. Angeles, “There are three more mats to unfold. The others who aren’t here…”

Nana Emilia caught her breath; there was a swift constriction in her throat; her face paled and she could not say anything.

The self-centered talk of the children also died. There was a silence as Mr. Angeles picked up the first of the remaining mats and began slowly unfolding it.

The mat was almost as austere in design as Mr. Angeles’ own, and it had a name. There was no symbol or device above the name; only a blank space, emptiness.

The children knew the name. But somehow the name, the letters spelling the name, seemed strange to them.

Then Nana Emilia found her voice.

“You know, Jaime, you didn’t have to,” Nana Emilia said, her voice hurt and sorely frightened.

Mr. Angeles jerked his head back; there was something swift and savage in the movement.

“This is for you, Josefina!

“And this is for you, Victoria!

“And this is for you, Concepcion.”

Mr. Angeles called the names rather than uttered them.

“Don’t, Jaime, please don’t,” was all that Nana Emilia managed to say.

“Is it fair to forget them? Would it be just to disregard them?” Mr. Angeles demanded rather than asked.

His voice had risen shrill, almost hysterical; it was also stern and sad, and somehow vindictive. Mr. Angeles had spoken almost as if he were a stranger.

Also, he had spoken as if from a deep, grudgingly silent, long, bewildered sorrow.

The children heard the words exploding in the silence. They wanted to turn away and not see the face of their father. But they could neither move nor look away; his eyes held them, his voice held them where they were. They seemed rooted to the spot.

Nana Emilia shivered once or twice, bowed her head, gripped her clasped hands between her thighs. There was a terrible hush. The remaining mats were unfolded in silence. The names which were with infinite slowness revealed, seemed strange and stranger still; the colors not bright but deathly dull; the separate letters, spelling out the names of the dead among them, did not seem to glow or shine with a festive sheen

A Fight at the Reefs