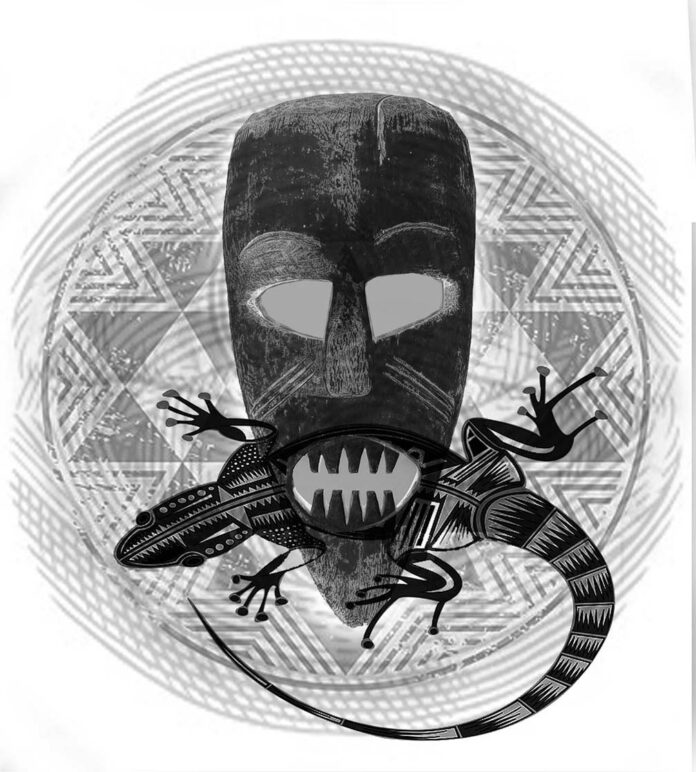 My father works in a coconut farm. People in Bondoc Peninsula work there. Coconut farming is the usual livelihood in Bondoc Peninsula. Lukad or copra is the end product of the coconut farming. After the whole process of copra making or paglulukad. Lukad will be sold to the owner of Coconut Mill in town. Most of the owners of the Coconut Mill are called buwaya. Coconut farmers suffer bankruptcy because they are always cheated by buwayas. Buwayas are protected by municipal officals. It was only the bayawak who stood up to expose the abuses of the buwayas. Because of this, coconut farmers will often shout: “Bayawak for Mayor!

I was four years old when my mother went to Manila. I have wondered when she would come back. My father would say that from Manila, she would go to Japan to work. Japan was very far from our home. It would take too long for my mother to come back. Though I have always known the answer, I’d still ask myself these same old questions: What was my mother’s work in Japan? How far is Japan from our home? I wondered one time why it would take long for my mom to send me package from Japan. I wanted Mom to come home. I graduated elementary at Bayawak Elementary School and secondary at Punyal High School. Still, I have been waiting for her.

I can still remember until today how hard my father works in the farm. Oftentimes, the rooster has not crowed yet, but my father is already awake to prepare all the things he needs for making the copra. Instead of playing and be bullied, I prefer to accompany my father to the farm every time I’m not in school.

I am overjoyed by the feeling of riding the carabao with my father in going to the farm. Because of the muddy roads that we have to pass, I always have a chance to fall from the carabao. Still, I am overjoyed by that feeling. Even the most hardworking animal, hailed as the national emblem, gives up because of the struggles from the roads that are destroyed by time. The national animal is already tired, though it hasn’t reached the top of the hill. The only jeepney rarely hits the road except summer when the road gets dry. People there rarely reach Ilaya. They walk two hours before they reach the crossing. From there, a jeepney take half an hour to reach the town.

“Tay, I feel it’s awesome to have wing.” I told my father one time.

Though I am happy riding the carabao, I never became happy of the carabao’s condition. If it could talk, it would curse us because no one had dared to fix the road it traverses. Aside from that, my butt hurts, too. I think it’s better to fly than to suffer from the road which looks like champorado.

Siglo, when you have become a pilot, it would appear you had wings, too. Flying a plane makes you feel like flying, too.

My father has dreamt of me being a pilot. The grandson of the bayawak, would be tested to fly a plane. I’ve never wanted to fly a plane. I wanted to fly by myself only without a plane. Just like A-Gel in the movie Batang X. John Ace Zabarte played that role. I envied him. He could fly. Whenever I think I fly an airplane, I doubt if that plane won’t crash. I will blame the plane. The worst is people will blame you for the plane crash. If I myself fly, even if i fall, I only have myself to blame.

I never imagined why my cousins and I would be called grandchildren of bayawak. For us, that’s a curse. People say we’re very good at changing the course of situations, whatever they are in life.

I suddenly remember that I and my cousins are very fond of catching roosters and teasing them. We would chase the roosters everywhere they go. Even in the anahaws, in the bulis, in the most remote places, we try to catch the roosters. Once the roosters are caught, we will put tari in their feet and make them fight. The tari is made up of thorns of plants. Whenever the roosters meet, we burst into laughter. When we get tired of the cockfight, we will find new things to play with.

We also spend our time picking guavas. We will check every place to find ripe guavas. We always know how to go home, that’s why we don’t care where we go. We know our way home even without markings on the road. We are used to not being lost. Our own footsteps are the reason that we never get lost.

We often race downhill with the use of palapa. We have our ways of decorating the palapa. We put brakes, seats, and even tailpipes in there. Making noise was the trend that time. We produce our own sound of horns and machine engines. We race. The fastest one usually gets his shorts ripped.

We also climb trees. My cousins and I race to the top of the tree. Climbing the coconut tree is never a struggle for us, even the tallest coconut. We often climb that tree whose fruit is used in making tuba. We’re the ones who harvest coconut for tuba. We drink the tuba in the hidden parts of the coconut farm. Our cheeks turn red after drinking it.

After drinking the tuba, we race to the river. We get rid of our headache and the dizziness there. We play like we’re drowning. The one who can’t breathe underwater usually gets it from the others. We try to drown that one. If he can no longer breathe, we save him. Lolo Mena often reminds us not to go to the deepest parts of the river. Maybe the anayos will pull us down. I don’t know if Lola Mena just scares us. We haven’t been pulled down by the anayos. We don’t even know what that is. We haven’t seen one either. We think it is a maligno. We haven’t seen a maligno either. Maybe both of them don’t exist.

That’s how we spend our spare time. We never played computer games, because aside from the absence of computers in Bondoc Peninsula, the absence of electricity is the primary problem.

I grew up fearing nothing. I’m not afraid of ghosts because I scare them. They don’t exist. What makes them different from the aswang? I believe aswangs exist. However, I am not afraid of them. My neighbor is an aswang. There are real people who belong to the family of aswang, but they don’t hurt people as long as you don’t tap them on the shoulder when you talk to them. I get used to waking up at midnight to pee and get used to see my aswang neighbors transform themselves from human to dog, and from dog to human. They transform to boars, cats, carabaos, horses, cows, but most often dogs. I am not afraid of them. I often scare them. Whenever they see me, they can’t fully change into a different form. When they feel I am no longer watching, they would continue their transformation. I don’t know why they act that way. But they don’t hurt people. They are our long-time neighbors, but they never hurt us. One time I saw our aswang neighbor and non-aswang neighbor chatting. Kang Asyong and Kang Dodong. Kang Asyong is the aswang. When Kang Dodong got excited from what he heard from Kang Asyong, that whenever Kang Asyong and his wife had sex, his wife wore black bikini. Suddenly, Kang Dodong tapped Kang Asyong on the shoulder. That night, Kang Dodong’s house was surrounded by dogs. In the morning, all Kang Dodong’s chicken and geese got killed. After that incident, I have never seen them talk.

Our ancestry has a huge impact on us. That’s why the aswangs never hurt us. Though father and Kang Asyong usually talk, they are far from each other. My father warned us immediately that our neighbor is indeed an aswang, because one time when my father was chasing a chicken, a dog suddenly devoured it. The dog got it first. Tatay missed the catch. He could have cooked tinola afterwards. He wondered where that dog came from. Rarely will you see one in our place. After that incident, we always become watchful of our neighbor. We fear that our chicken and geese might disappear.

When I was in my early youth and learn to read, I started to love reading horror stories. I laughed at dumb characters in those stories. Many characters in horror stories frighten themselves that’s why they get dumb if the kapre, maligno, dwende, tiyanak, manananggal and other entities from hell reached them. They would shout, cry, and run until they fall from the stairs and die. Aside from believing in aswangs and their unique traits, I also believe in the devil. I don’t want to believe in ghosts because I have seen one in comics. That ghost smiles. Though I haven’t seen a devil, I still believe it exists. The devil pushes people to transform to aswang. The aswang is a slave of the devil.

My passion for reading continues, although I usually get bored in the house. I have no cousins to play with. I’ve read everything I’ve laid my eyes on. Even pamphlets about caring for pigs, I read them. Even pigs have high-blood pressure. They suffer from loose bowel movement. They vomit. They get sick. They have worms inside their stomach. Before, I thought pigs shouldn’t eat kaning baboy. Maybe it caused the presence of worms inside their stomach. Their food could be put on top of the rice when the rice is about to cook. They, too, can eat delicious food. The only problem is that when their food is also pork.

When my aunt gave me two novels from Manila as gift, I read them. I realized that there are other things to read. I read something unusual in that novel. I have known that what I read is part of married people’s life. But I was feeling something different as I read it. It felt like burning. I couldn’t breathe.

In the farm, Sining and I would chase the chicken, just like what I and my cousins do upon
seeing one. She was the first girl to be with me in chasing a chicken. I don’t know why we were happy after catching the chicken. Sining was as agile and fast as me. Sometimes I’d wonder, could she have descended from the bayawak, too?

Romeo Palustre Peña
Romeo Palustre Peña, 34, is from the town of Catanauan in Bondoc Peninsula (part of Quezon Province), Philippines. His novel titled Isang One Dalawang Zero was published by Visprint in 2018. His short stories and poetry have appeared in various literary anthologies and publications in the Philippines, Singapore, and Egypt. He was accepted as fellow in writing workshops such as U.P. National Writers Workshop, U.S.T. National Writers Workshop, Palihang Rogelio Sicat sa Malikhaing Pagsulat and Iyas Writing Workshop.

Pause for a Moment

Find Us a Rainbow(A Song)