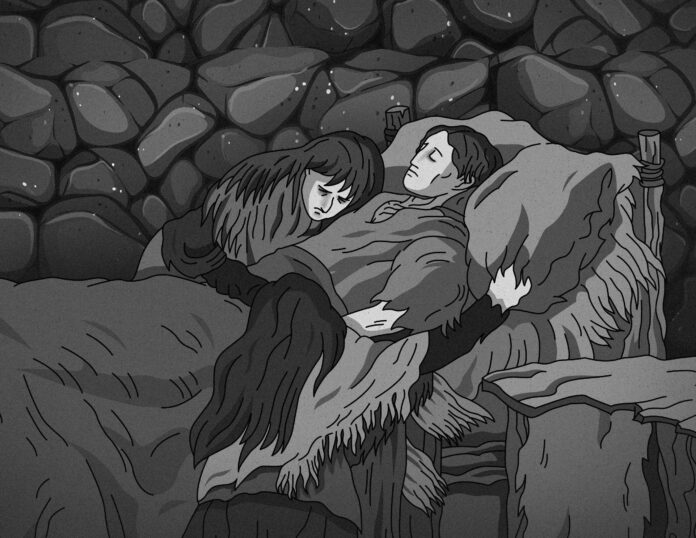 Throughout the annals of history, many facts are long forgotten or never recorded at all. This is accurate regarding the time we humans lurked in caves. Although it is dispiriting to think so, there are countless tales of hardship across every corner of the world that will never be told. Cultures and traditions—sunk by the rising tide. Superstitions, beliefs, and deities comprise a hefty portion of these time-rotten bygones. One deity, one very old—the first—was forgotten almost fifteen thousand years ago in the lands of Eastern Europe.

Yes, the first god. No name was given the gods; people of this time had no use for names yet. Our first belief in a higher power was conjured in some tiny village. Winter was nigh. The village of young worshippers had yet to supply enough food for the season. The settlers weren’t allowed to hunt animals; it wasn’t the way their god taught them. They were permitted to take the crops, but never a conscious being.

All they had was be the supply of vegetation they could accumulate in time before winter. Many believed their god would help them in their inevitable struggle in the snow, but a few had doubts. The winter brought everything to its knees, and the great storms targeted the village. The settlers snuggled in their huts. The outside was a trap of white blindness they wouldn’t dare enter. The settlers stayed in their homes, trying to remain comfortable with the food distributed. There was little to do when it came to recreation.

On a morning that would haunt every one of them forever, a girl had awoken from her bed. She yawned and reached for the closest basket of food rations, and felt nothing as she put her hand inside. Empty. She reached inside the other baskets, but like the other baskets, they were empty. The girl had to think of something, so she wrapped her bed around her and headed out into the unforgiving weather. She approached the home of her neighbors, begging for any bit of leftover they might be able to spare. They, too, had nothing. For the sake of their hungry child, the neighbors joined her in approaching the other nearby huts. None of them knew this at the time that the entire village had no food.

In barely a month, the settlers already consumed their final stash of provisions. Despite that, the settlers remained vigilant, for their god. Days and weeks went by. Lacking a source of food, their methods grew increasingly hopeless. The settlers would usually go outside and pick anything edible from the bushes or trees. Sometimes they would pluck the grass from the snow and eat it. Other times, they’d eat the snow itself. Ingesting that was their main cause of sickness. They were hungry earlier—now they were starving.

One man from the village reserved most of his meals for his younger siblings at the start of winter. He soon turned pale, the very picture of hunger. He lay motionless in bed. He seemed almost dead, his eyes were closing, he was using all his might fighting off the darkness enveloping him. He seemed doomed to die. His siblings sobbed by his bedside. Meanwhile, a snow rabbit appeared on their doorstep. An idea lit up. They grabbed the rabbit by the neck and stabbed it through its forehead using a sharp stick they found on the ground. They offered it to their dying brother.

At first, he was horrified by what he saw. He refused to do such a blasphemous thing in front of what they cared so much for, a divinity who enlightened them to become civilized. But the man felt the burning, excruciating pain in his stomach. Whether he liked it or not or whether his god liked it or not—he had to devour the rabbit. He held it gently as a sign of respect for the innocent little life his siblings took, then he munched on the rabbit like a savage with his bare teeth. From this one desperate act his life hinged on, he broke the codes of his belief.

From a spark of miracle, the blizzard slowly waned. The terrain was not suitable for farming, but it was for hunting. The villagers needed to act now. There was no time for debate. This was the only chance they would get to make it through the rest of winter. The men, women, children, and elderly headed out and brought with them spears, sticks, rocks, anything resembling a weapon. They butchered every living creature that was unfortunate enough to cross their path: rabbits, raccoons, foxes, fish, stags, wolves, bears.

Their ways were now fruitless, they believed. Ever since that winter, they vowed to never fool themselves ever again. The settlers cursed their god for the families they lost that winter. In time, the settlers moved on and the memory of this deity faded, buried in dust and darkness.

The first symbol of a higher power was created and the first one was forgotten. The first of many.

Kiff Joshua
Kiff Joshua is a seventeen-year old who managed to have a poem published by Where the Write Things Are.