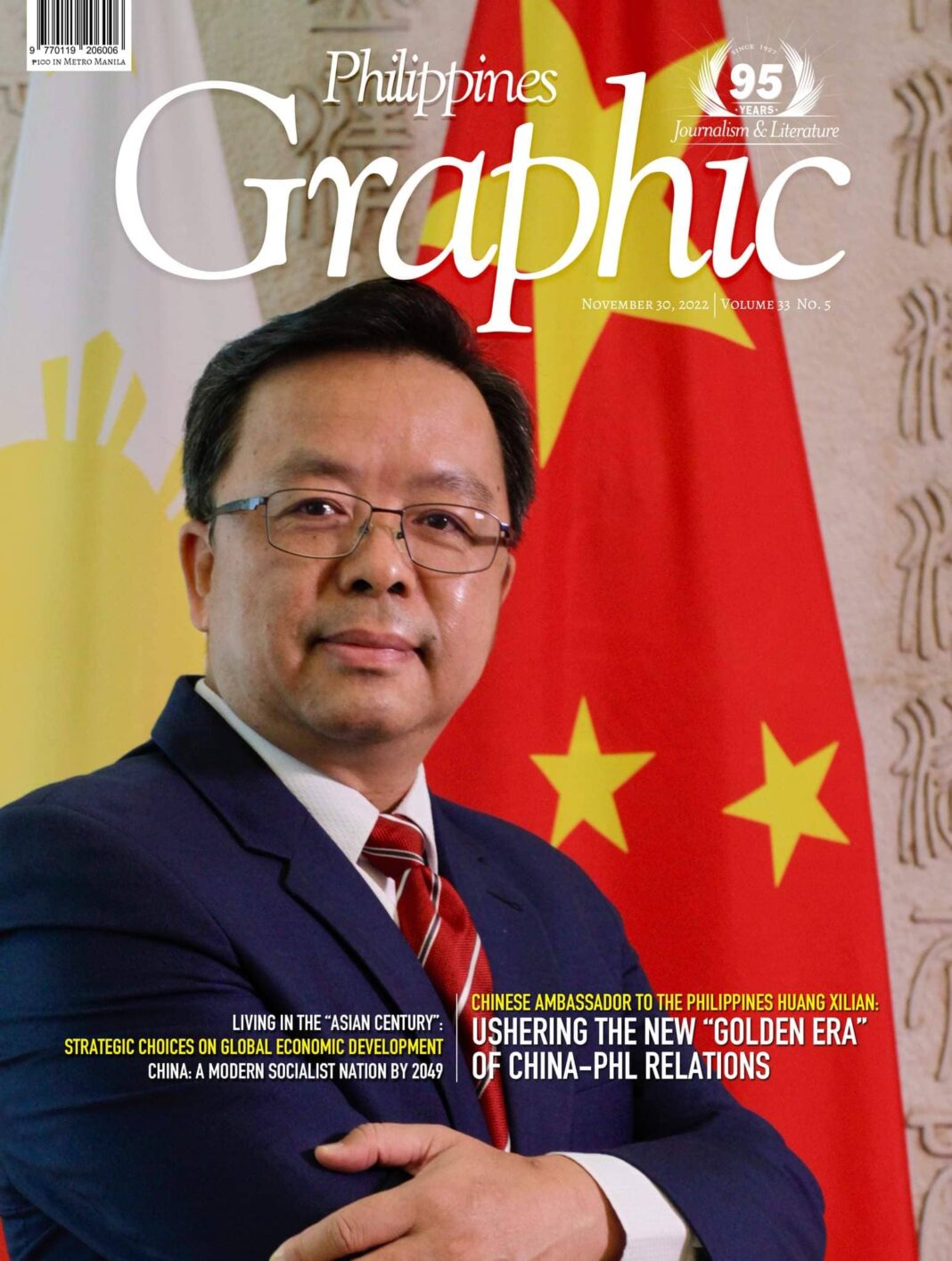 What is the future of Philippines-China relations under the new administration of President Ferdinand “Bongbong” R. Marcos, Jr. and the recently re-elected Chinese President Xi Jinping? What role will China play in the much-vaunted “Asian Century”?

At the center of these burning questions is Chinese Ambassador to the Philippines Huang Xilian, a guest at the recent Pandesal Forum in Quezon City.

A University of Manchester-educated, highly-respected, charismatic envoy, Huang is earnestly promoting high-level diplomacy and close people-to-people friendship between his country, China and the Philippines.

Already, this Facebook-savvy envoy is assiduously reaching out to the nation’s millennials. His Facebook page, “Chinese Ambassador to the Philippines Huang Xilian” already has 101,000 followers as of Nov. 27.

An ambassador to the Philippines since December 2019, Huang has been at the forefront of various support activities from China to the country—ranging from cash aid and provision of free COVID-19 vaccines to rice and other food donations for typhoon victims, all the way to P1 billion peso-worth of military assistance.

Huang makes it clear: “What China brings to the Philippines is not colonization and war, but cooperation and friendship.”

He even said that China has no objection to the United States’ plan to build facilities or pre-position military assets in Philippine military bases under the Enhanced Defense Cooperation Agreement (EDCA) “for as long as these would not be directed against China.”

Huang reasoned that it is normal for countries to have some differences, but the two countries should not allow these differences to get in the way of or to sabotage mutually beneficial development and diplomatic relations.

Huang bared that during the historic, recently-concluded 20th Communist Party of China (CPC) National Congress, the ruling CPC vowed to transform the world’s biggest nation of 1.45 billion people into a “great modern socialist country” by the year 2049.

With this policy direction in place, the Chinese envoy to the Philippines expressed optimism that bilateral relations between Beijing and Manila shall gain new momentum under the watch of Marcos and Xi.

The ambassador made mention that he had interacted with Marcos and his wife, First Lady Liza Araneta-Marcos on various occasions, before and after the May elections.

When this writer asked his impressions of the First Couple, Huang expressed personal admiration for the two, adding that China “will never” forget Marcos’ parents.

In 1975, then First Lady Imelda Romualdez Marcos went on a ground-breaking visit to Beijing to meet with Chairman Mao Zedong and Premier Deng Xiaoping, accompanied by a teen-aged Bongbong Marcos

As China moves toward its new goal of “Chinese modernization” and of boosting partnerships with neighboring countries, Ambassador Huang said China is looking to encourage more Chinese companies to make the Philippines their “first investment destination.”

He likewise encouraged Filipino farmers and agriculture entrepreneurs to tap China as a “global super market,” since China has emerged as the No. 1 export market for Philippine agriculture products, such as bananas and avocados, to relatively new exports like durian and mangosteen.

The envoy revealed that some protocols are just being ironed out to give way to the export of more tropical fruits from the Philippines.

According to Huang, joint Philippines-China oil & gas exploration & development is still possible. “We do believe that our cooperation in oil and gas will help meet the needs of our two countries on energy. We are ready to work with this administration. We hope that we will find some way to handle remaining differences so that we could begin that kind of oil and gas common developments at an early date, that it can benefit our people and our two countries as early as possible.”

He likewise said that Beijing is still open to renegotiate the three proposed and currently stalled large-scale railway projects that were originally set to be funded and constructed by China.

Infrastructure is one of the key priorities of the new Marcos administration under the “Build, Build, More” or BBM program. Huang said that China will cooperate and assist the Philippines to accelerate the infrastructure program.

He likewise shared that China is now working on 11 major infrastructure projects with the Philippines’ Asean neighbors—Laos, Malaysia, and Jakarta.

“I’m happy to see that fishermen from both countries have been fishing at the sea peacefully and actually they have been getting along. While we are managing differences, we are also working to promote maritime cooperation between our two countries,” he said.
Huang’s assertion was supported by an Oct. 12 report by journalist Camille Elemia of Benar News, who wrote: “China still controls access to the disputed Scarborough Shoal in the South China Sea, but Filipino fishermen say they have been accorded better access to the rich fishing grounds.”

Ever since former President Rodrigo R. Duterte repaired and normalized Philippines-China relations, Filipino fishermen have been provided better access to the West PHL Sea. They are reportedly no longer barred by Chinese Coast Guard vessels from entering traditional fishing areas near the Scarborough Shoal.

With regards to the controversial Philippine Offshore Gaming Operations (POGO), Ambassador Huang Xilian clearly stated that POGOs are bad for the bilateral relations of the two countries since these games harm the local economy and hamper the social development of a country.

“We have been working closely with Philippine government agencies to crack down on illegal POGO. We hope that the negative impacts of POGO will be fully realized by people and by authorities in this country,” Huang said.

The diplomat further explained: “China is just one of them, which has totally and comprehensively banned POGO. POGO is illegal for any Chinese citizen not only at home, but also overseas.”

Various business and public advocacy groups have recently also expressed full support for the banning and phase-out of POGOs.

The Foundation for Economic Freedom (FEF), the Makati Business Club and the Management Association of the Philippines (MAP) said in a joint statement the social and reputational costs of government sponsorship of offshore gaming operations far outweighed any economic benefits. “The taint of money laundering diminishes confidence in our banking system and puts legitimate financial flows, including from OFWs, at risk from sanctions of international oversight bodies.”

Previous article
Songs from the Heart – A night of choral music feat. Loboc Children’s Choir and the Little Singers of Paris
Next article
A Dialogue at Pandesal Forum

The PHAP and PHAPCares leadership