Football beneath the volcano 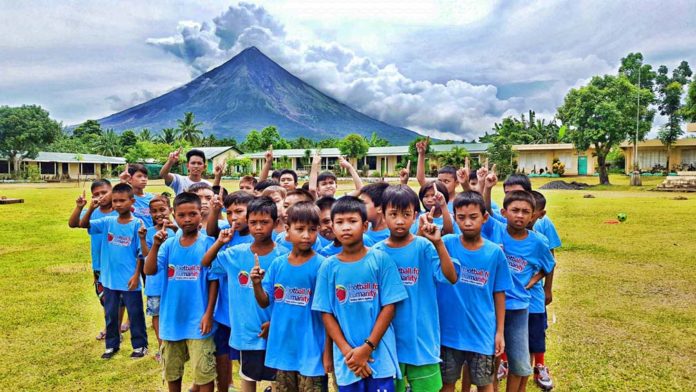 Members of the 9th Infantry Division of the Armed Forces of the Philippines (AFP) based in Bicol joined the children in the training, temporarily setting aside their usual duties and instead learned to dribble and pass.

Although it was rainy the entire morning, Mayon Volcano and an unusually strong sun showed up just in time for the 40 children, mostly boys, who were selected for football training on the grassy field of the Sto. Domingo Central Elementary School in Albay province.

Chris Thomas and his Filipino coach were overjoyed. The British founder of Football for Humanity (FFH) grew confident that their activity would proceed as scheduled. The volcano presented a beautiful backdrop for the afternoon of fun that he had planned for these children who, just several months ago, suffered under Mayon’s fury.

“This is the most beautiful location that has hosted FFH’s fun football!   Nothing can beat the beauty of Mayon, even when she had recently shown her temper.  I think she will actually inspire the children to have the most fun they can, for a few hours of grassroots football,” said Thomas.

Coach Jojo Roncesvalles of Balatas Elementary School in Naga City, some two hours away from Albay province, prepared the training that the FFH founder would join.

FFH is a charity dedicated to using the beautiful sport to create transformations in children and their communities.  “We use football not just as a sport, but also as a platform for inculcating positive values, and healing children from past traumas brought about by poverty, armed conflict, and natural disasters,” Thomas explained.

Football’s healing power is proven throughout the world, for many decades, he said, adding that, the 2018 World Cup is a continuing testament to the ability of sports to unite countries, cultures, and beliefs.

Football demands much from its participants, not just from the athletic point of view, but probably as much in terms of discipline and respect—for the game, for one’s opponent, and the officials whose decisions are final and unbending.

“That’s what I love about football, and sports as a general rule.  On the pitch, they all agree on a set of rules recognized by ALL teams, players, and officials.  It’s one of the best manifestations of global unity.  It’s a moment when we all become truly “civilized,” especially in the weeks of the World Cup.  It’s when all nations practice ultimate sportsmanship, become truly human, recognizing victory and defeat as one,” said Belle Tiongco, co-founder of Football for Humanity.

As an added show of unity, members of the 9th Infantry Division of the Armed Forces of the Philippines (AFP) based in Bicol joined the children in the training, temporarily setting aside their usual duties and instead learned to “dribble and pass,” gamely running and trying to keep up with the young boys who were delighted to have grown-ups compete for the ball in the make-shift football pitch.

“We use football not just as a sport, but also as a platform for inculcating positive values, and healing children from past traumas brought about by poverty, armed conflict, and natural disasters.”

Football for Humanity is partnered with the Civil Military Operations Regiment based in Fort Bonifacio, Taguig City, for community outreach programs especially those implemented in Mindanao.

For this Bicol activity, combined members of the CMOR and the 9th ID presided over the distribution of over 800 boxes of school supplies donated by Alorica, Phils, a business process outsourcing company based in Manila.

“This is who we are: we bring people together to play football, have fun, create friendships, and learn and practice respect for their fellow men.   Today, it’s a sport.  Tomorrow, the children will play again.  They will learn the sport and will love it and will play it day by day, all the way to their adult years.  The discipline they practice will convert to moral fiber.  They will be good citizens, tolerant of differences, motivated and pro-active, and proud to be Filipinos.  Tomorrow we will see a better nation because we have taught the children well, through the beautiful game of football,” Thomas concluded.

Football for Humanity Foundation is a charity dedicated to using football and the power of play to create personal and social transformations.  It is registered in the United Kingdom and the Philippines, and may be reached at www.footballforhumanity.org, www.facebook.com/footballforhumanity.

Susan Roces: 80 years of a life & memories of a movie icon