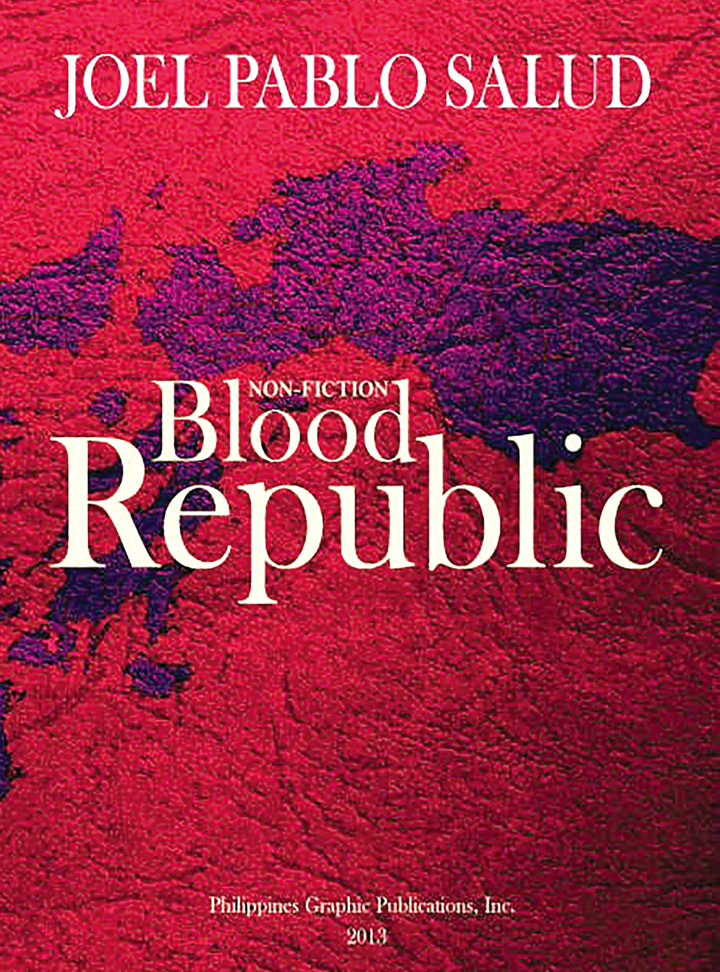 The non-fiction genre in the Philippines has always been a point of contention for many critics because it has been literally dominated by “pop” books that are churned out, seemingly, every week and month, in a fashion that reminds one of a drunken sailor folded over the deck of a ship. While there’s nothing wrong with wanting teenagers to start reading, it appears that the pantheon of “pop” writers that are being brought in front of the public all want to do the same things over and over—until the saturation creates permanent brain damage to the readers.

Once in a while, a “newcomer” disturbs the dominant order of things, in an effort to stem the tide of superficiality that is creating permanent harm to the collective national psyche. Enter Blood Republic, a collection of non-fiction essays published in 2013. The collection is split into three books or mini-collections: Heartspeak, Soulspeak and Bloodspeak.

Written in a fashion similar to an all-out attack from the sea, land and air, with an abundance of ICBMs and mortars, Joel Pablo Salud’s Blood Republic generously dishes out literary badassery that grabs the reader by the hair and transports him to various points in history in the nation and beyond, in what one can only see as the author’s unique method of recuperating the discourse of the nation-state from the greedy hands of the oppressors.

The French thinker Jean Paul Sartre once said that to write something is to essentially demand change from the world. One cannot write without saying and meaning something, for one falls into the cheap illusion of “art for art’s sake.” So what does Blood Republic want to say? What does this mean collection of essays, strategically effusive as they are and landscaped with such ideological depth that you’d need an industrial drill to get out convey to the nation?

Salud’s prose is anything but straightforward—and for good reason. It is in the deconstructive synapses that we find meaning-making in its most volatile and fertile state. The first part of the collection, Heartspeak, contains narratives from the author’s life as a journalist as the decades flip the pages of time. The essay “A Venusian Tale” exemplifies the Salud’s mastery of the essay form. Gripping and fresh, it recounts the author’s chameleon-like ability to enter the underworld of Philippine society and make sense of the larger mechanisms that are allowing illicit “hidden economies” to work.

As an undercover journalist, he explored the minute details that contributed to the survival of the prostitution trade in Ermita. “A Venusian Tale” reads like a modern detective story but is actually a deconstructive effort that makes us understand, once and for all, the logics that drive the highly feminized economy of prostitution. The human touch, as exhibited by the way the author made contact with Venus, catapults the reader to the painful, personal realities contained within the larger ambit of the illegal trade – that victims of prostitution represent each and everyone one of us and there is no logical nor humane reason for people to continue suffering in its greedy clutches.

The shorter “Souls of Revolt” tackles a part of the author’s development as a writer and reveals a side that few see or realize that was there: Salud as a learner, an eternal student and someone who takes the concept of family and expands it to the people who have contributed to his growth as a thinker/author.

It is in his courage to reveal his writerly vulnerabilities that the reader is faced with the reality that successful writing doesn’t happen overnight. A writer’s development is more organic in nature and literally takes a lifetime to come to fruition. There are no shortcuts and the unseen and the unheard parts of a writer’s life are all one needs to see or read to realize that writing as a form of labor deserves just valuation in a society that is slowly losing sense of what is truly valuable in the first place.

Book II, Soulspeak, contains essays that have to do with the wide vista of religious belief, ideology and what we know commonly as spirituality. This collection reveals frequent textual re-centering and decentering, not uncommon in Derridaic attempts to unearth the hidden logics of old systems.

The essay “Gospel according to Joel,” is a humorous yet critical cartography of the Messiah’s crucifixion, turned sideways and refracted through a modern journalist’s eye. Salud dramatizes the crucifixion of Christ as a global event that shook the world and I quote “According to the Israeli Seismology Bureau, the epicenter was pegged at 15 miles down, right below the center of the philanthropist’s cemetery. The head of the bureau said this was odd as there is no reported fault line that traverse that piece of prime real estate.”(Salud 69)

Of particular interest to me were the “interviews” with various characters, which is reminiscent of how thought pieces are propelled across ideological boundaries of nation-states to create a global resonance, especially if the purpose of the thought piece is to gain support from a global audience. Salud reopens the Messiah’s historical dossier and shakes out the dust before projecting it in a way that makes it more understandable, in both scope and meaning, to the modern reader.

The final book, Bloodspeak, collects the author’s political imagination and knowledge and condenses some of it in narrative pieces that revolve around governance, tyranny and dystopian projections. The epicenter of the bleeding national fracture is the tendency of democracies to transmogrify into tyrannical rule and Salud minces no words in “Memories of Martial Law” in describing the dark days brought about by the dead dictator.

Tyranny takes on multiple forms at any time and “Tyrant’s Wet Dream” clearly demonstrates how legal codes can easily stifle the crux of journalism and human expression in a manner that interpellates all journalists, regardless of the institutions they serve. “2025,” the most dystopian of pieces in the collection, recounts the horrifying muck that the Philippines finds itself in as it descends upon the final stages of necrotization. With printed books being outlawed and local judges parroting that all you need is the Internet, the author comes to terms with the evolved landscape of cyberspace and the ideological backlashes that come with it—the wide availability of non-information, the eternal hypnosis in front of the computer screen and underneath it, the larger structure benefitting from the accelerated rotting of national intelligence.

Welcome to the Blood Republic.

All the Meanings of Blood