Fashion and the Declaration of Independence 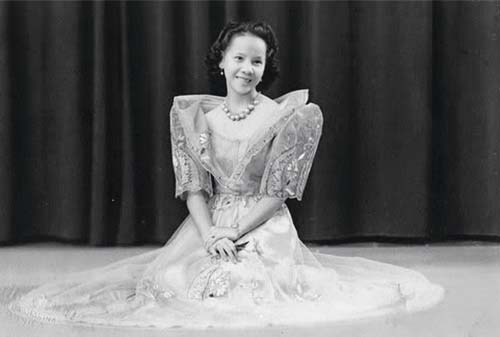 Philippine fashion evolved throughout the years and it is evident that it has been greatly influenced by the country’s former colonizers—Spain, the United States and even Japan.

As the country celebrated its 123rd Independence Day last month, it was a good time to look at women’s fashion in 1946, when the Philippines gained its full independence from the United States.

When the Americans landed on Philippine soil at the turn of the 20th century, Philippine fashion still had a Spanish flavor and this went on for five years.

A notable change started on the sixth year of American colonization as the United States started influencing Filipino fashion and culture. The women now wore the “Trahe de Mestiza” which had bigger sleeves and a narrower floor length skirt with a long train called the saya de cola.

According to the Philippine Folk Life Museum, the “Trahe de Mestiza” is actually the “Maria Clara” which has been trimmed into shapely modernity with detailed oversized lace bell-shaped sleeves. The saya became slimmer that burst out at the hem into a flare and acquired a train leading to the new look.

As the country entered the 1920s, the “Trahe de Mestiza” continued to evolve. While the skirt remained the same, the Angel Wings were replaced by butterfly sleeves and the panuelo became smaller. Filipino women who had lived in the US and Europe wore western fashion with loose dresses and knee length skirts.

Come the 1930s, the Philippines became a popular destination for foreign tourists. It was the heyday of carnivals and beauty pageants. Greater exposure to western styles of dressing saw the “Trahe de Mestiza” replaced by floral printed dresses with mid-calf length skirts as everyday wear.

The elders and middle-aged women continued to don the “Trahe de Mestiza” while the younger ones considered it as formal wear reserved for special occasions and carnivals. When it came to make-up, the women adopted Hollywood inspired glamor of soft blush, powdery faces and darkened eye creases. Women maintained long hair but wore it in a bob when they attended carnivals.

The 1940s saw a shortage in tailoring shops, clothing boutiques, and dressmaking factories, with the coming of the Second World War.

Women had to wear simpler clothing as austerity measures were implemented. The “terno” was no longer being manufactured and the women had to make do with monochromatic dresses, mostly in dark tones. The shirtwaist dresses which were popular in this period remained but it had a simpler look.

During the Japanese occupation, Filipino women looked “either propagandistic or tragic.” At the height of the Hukbalahap rebellion, Filipino women were pictured as armed patriots who were ready to fight the Japanese. The women wore their hair “with side rolls; for shape and stability, possibly backcombed and pinned into a mid-length bob.”

American influence in men’s fashion is most evident from the 1920s to the 1940s. From collarless camisas with a buttoned front paired with drawstring pants that can easily be rolled up for work purposes, Filipino men started wearing the American suit or americana.

The americana became the staple in a man’s wardrobe in the 1920s. The Equire.com write up titled “Americana vs Camisa: The History of Filipino men Fashion” said the americana “had open, thin lapes and was worn over a close-necked collared shirt with a tie.

Men’s fashion at that time saw the coat was matched with high-waisted, slim-fit white trousers that were called “baston” because the pants tapered off at the knees and down to the ankles, showing of the socks. Pants were also worn cuffed at the bottom.

To complete the American look, the men wore a straw boater hat that had a flat top and brim and a black band around the crown. Filipinos from the middle to upper class work panama hats, fedoras or bowler hats while the working class who spent a lot of time under the sun, work native Western-style woven hats, replacing the sambalilos and salakots.

When it came to shoes, the Filipino men at that time wore his sharp-pointed leather shoes that were available in different styles – two toned, cutaway, with so called “air conditioned” features.

The 1930s introduced a number of fashion trends for men. One of these is the double-breasted suit that had distinctive features like the front crossover panels, peaked lapels, broad shoulders, and six buttons. The era also introduced the shoulder pads to create an impression of a larger, broader torso. With the shoulder pads, the body acquired a square shape, and the peaked lapels framed the chest area. Sleeves, on the other hand, were narrowed at the wrist.

When it came to men’s hairstyles, the 1930s saw the Filipino men sporting longish hair in the front and on top with shorter sides and fading in the back, all stuck down with creams and hair tonic. The war years of the 1940s saw the men going for short-cropped low maintenance, military cut.

After the war, most of the people either lost their clothes or could not find any new clothes. When independence was declared in 1946, the Filipinos tried to resume their normal lives but the lack of dressmakers made the fashion of the 1930s and early 1940s popular for the rest of the decade.

1. Fashion and Clothing in the Philippines http://www.self.gutenberg.org/articles/eng/Fashion_and_clothing_in_the_Philippines

2. Women, Citizenship and the Politics of Dress in Twentieth-Century Philippines by Mina Roces https://cpcabrisbane.org/Kasama/2005/V19n1/PoliticsOfDress.htm

4. Americana Vs Camisa: The History of Filipino Men’s Fashion by Alex Castro https://www.esquiremag.ph/style/fashion/filipino-mens-fashion-a2289-20190401-lfrm6

Anne Ruth Dela Cruz is a seasoned journalist and corporate communications specialist.  After 13 years in the health care industry, she is back to where she started—print media.

Operation Smile: Changing lives one smile at a time